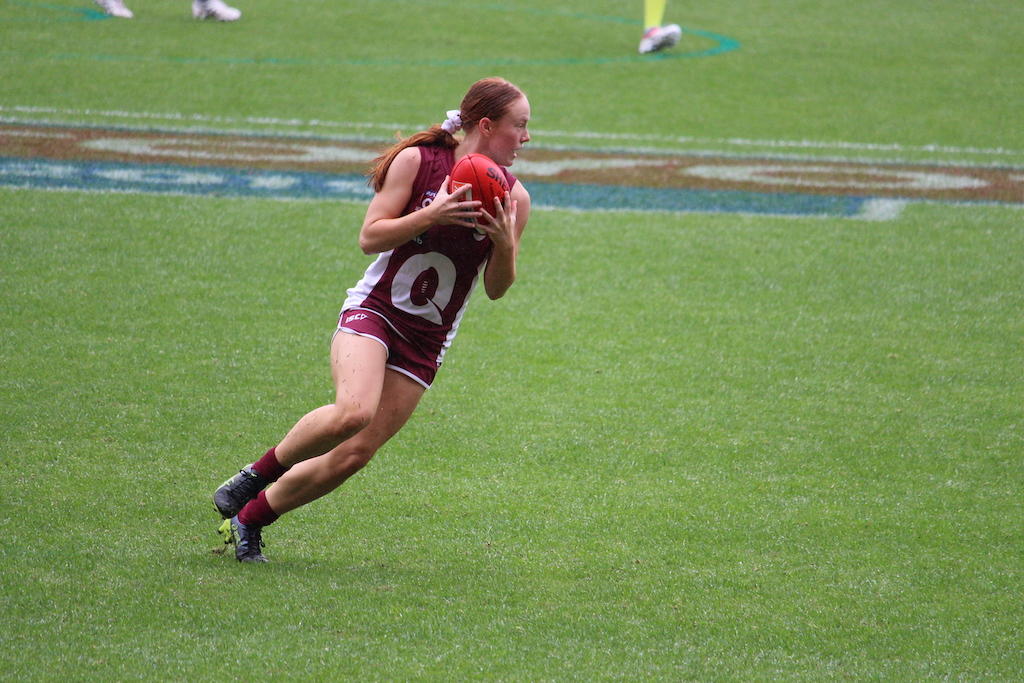 WITH a neat left foot and plenty of speed to burn, Queensland’s Chloe Gregory has always been told to back herself when deciding whether to take the game on. The utility has played between midfield and forward, and crossed over from netball because of her ability to do just that.

“I started out playing netball,” Gregory said. “I’ve played netball for my whole life and got into football through my dad (Scott Gregory) because he’s head of AFL Academy at Narangba Valley and he got me into that and then tried out for the Sunny Coast team up on the Sunny Coast, made that and then made Queensland in the same year so just been going from there. “It’s been really good so far.”

Gregory’s decision to continue her football journey was two-fold – one because of her dad’s influence, but also because of her natural attributes when it came to her impact in open space.

“I find football to be a lot more open and I can show off my skill a bit more rather than in netball it’s such a small game. I love the running and being able to be so free in the game of footy. “He’s (Gregory’s father) been trying to get me to play footy for a while now and he’s just over the moon that I’m playing it and he’s been one of the biggest coaches in my life and he’s really proud of what I’ve achieved so far.”

Gregory said her father provided her with plenty of advice throughout the journey, but his number one message was keeping it simple.

“He definitely shares a lot of his advice with me, but basically just tells me to take the opportunity where I can. Use my run and carry as much as I can,” Gregory said. “All my coaches in my life – I’m a left foot – say make sure you just get on your left foot, get it forward and run and carry. “(It’s) definitely one of my strengths to win a contested ball, get it out run and carry and kick it on my left boot because it’s a bit unpredictable which side I’m going to kick on.”

While Gregory has made it to the AFL Women’s Under-18 Championships representing her state, she is not content to rest on her laurels, focusing on improvements in her game to make her a more complete player.

“(I) definitely need to work on my work rate,” Gregory said. “So I’ve been playing forward a lot this year and as a high-forward, I push in as another onballer so I’ve been trying to work with the midfield as well as push down to the forwards to get to the tall forwards feet. “So work rate is definitely something to work on.”

The pacy utility said she was constantly asking for feedback on her game from coaches to try and build on areas of improvement and “hopefully implement them as much as I can into my game”. Having already tasted senior football with Brisbane Lions in the Winter Series competition, Gregory said she was keen to “get a good look” at AFL Women’s and make the step up to the highest grade if selected. She said the competition against stronger bodies was definitely noticeable compared to her peers at Under 18s level.

“It’s definitely a big step up, bigger bodies, it’s really hard to get into the game there,” Gregory said. “I remember I played wing in the first game and that was a really different opportunity for me and I really took that with the run and carry and now coming back to nationals and playing forward it’s a completely different game. “I just hope I get to play at that AFLW level.”

During her time at the Lions, Gregory has leant off another left footer who has an eye for goals who she sees as her biggest idol on the field, and has helped her build her burning desire to achieve her dream of playing at the highest level.

“Definitely (Jess) Wuetschner from the Lions,” Gregory said. “She’s been a big influence on me through the Winter Series comp and just the advice she gives is awesome and I take it on board every time we have a chat. “Now she’s playing down back after she was more of a forward last year and gets her cheeky goals and everything so, and the left foot like me so I look up to her a lot.”