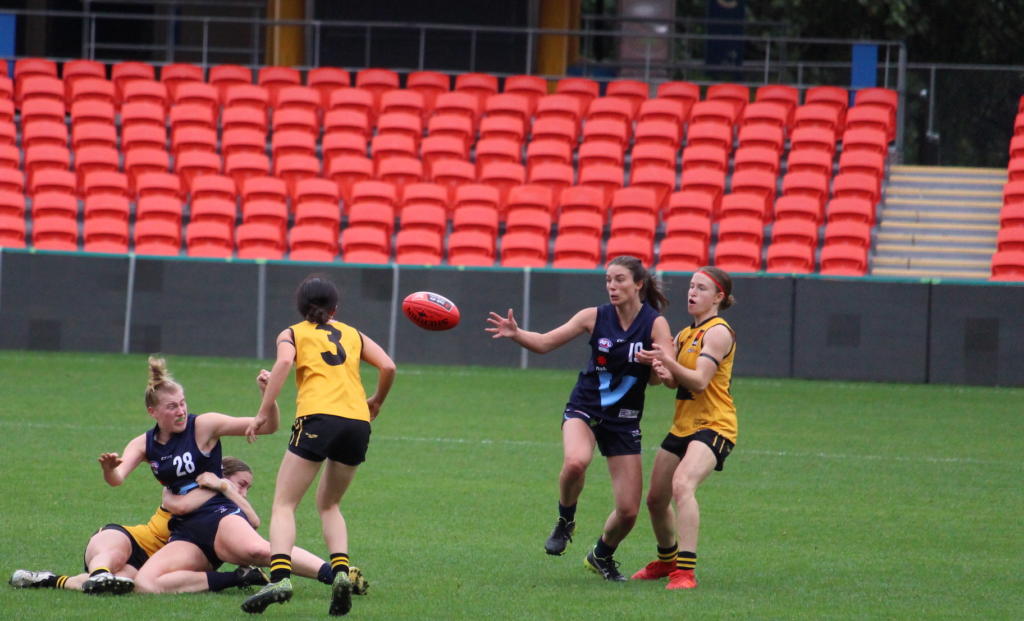 THERE have been plenty of impressive performers that have picked up the oblong ball after testing themselves with a round one, and Sandringham Dragons’ Marguerite Purcell is no different. The former netballer played in a premiership with Caulfield Grammar in 2018, and became a staple of the Dragons’ midfield in 2019.

The speedy winger showed plenty of growth and development in 2019, enough so to earn a place in Vic Metro’s AFL Women’s Under-18 squad which went undefeated at the National Championships earlier this month on the Gold Coast. For Purcell, this year was about enjoying the atmosphere out on the field and getting around her friends at the Dragons.

“[I’m looking forward to] just playing with the girls, they’re such a beautiful group,” Purcell said. “I really have so much fun with them, and getting to know them more and getting into the game is so much fun.”

Purcell had a job convincing her family that football was the way to go, making her way up the ranks to compete at the highest elite junior level.

“I started with club footy,” Purcell said. “I really, really, really wanted to play, so I begged my dad and he finally let me play so I was really happy. “I came from netball.”

Like many dual-sport athletes, Purcell found some difficulties crossing from netball to football, especially given her lack of training experience.

“I came straight into footy and didn’t actually do any training,” Purcell said. “I only played games because I wasn’t available to train, so it was kind of crazy, I didn’t know any of the rules so I kind of learnt as I went. “I think netball helped me a little bit, but it’s still totally a different game.”

Now at the conclusion of the NAB League Girls and AFL Women’s Under-18 Championships, Purcell will look back knowing she has taken a lot from the season, even from the very start when she tested at the NAB League Fitness Testing Day, hosted by Rookie Me in March.

“[It was] pretty tiring to be honest, it’s a little bit hot in here,” Purcell said after completing her sprints and agility tests. “But it’s been really good. “Bit scary, but I’ve enjoyed it.”

With her athleticism a highlight of her game, Purcell honed in on improving other aspects of her profile. The Vic Metro midfielder aspired to build a good base across the board from which to improve.

“Definitely my skills,” Purcell said. “It’s always something I’ve wanted to improve on. “Basic fundamentals, just so I can get a really solid base.”

The 170cm midfielder turned 18 over the weekend, and like many of the top-age prospects has aspirations of making it to the highest level possible. In 2019, Purcell averaged 10.4 disposals, 2.0 marks, 2.4 inside 50s and 2.0 tackles, with her kick-to-handball ratio being a massive 8.45 – 9.3 kicks to 1.1 handballs, showing her ability to move the ball in transition by foot. With Vic Metro she played all three games and experienced playing at the elite level. Whatever the future may hold for Purcell, the rise from netballer to playing at the highest junior level for Australian Rules football has been quite a journey.