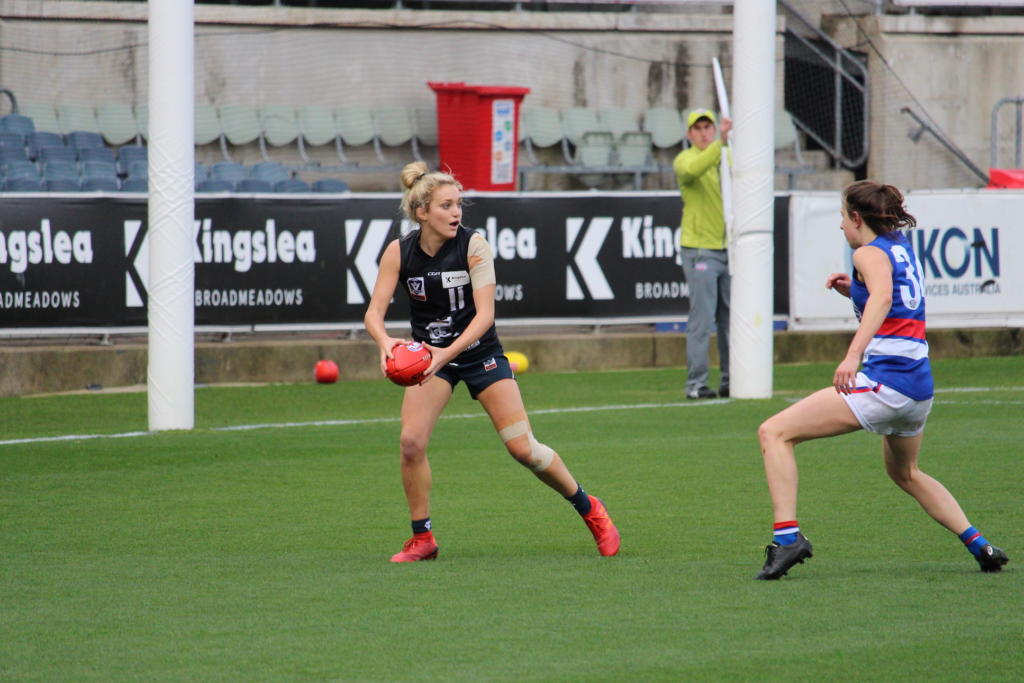 ROUND 12 of VFL Women’s is set to be a big one, with two of the top three facing off in what could set the tone for the rest of the season. Meanwhile, Hawthorn have their second bye as sides begin to prepare for the final five rounds of the season.

With both sides sitting towards the bottom of the ladder, this match will certainly be an interesting one as both sides put their foot on the pedal in the hopes for another win on the board. While Essendon have form on their side coming off a win and securing three victories for the season, Williamstown have the drive for another win since being leapfrogged once again by Darebin. Both sides are coming up against tough opposition in Round 13, so will need a strong performance regardless of the scores this week to be able to hold up against their respective opposition next week. Williamstown’s Mo Hope is currently leading the competition for kicks with 140 so the key for the Bombers will be to shut down Hope and apply pressure to deny easy kicks, while Simone Nalder will be crucial in the ruck to keep the ball in the Bombers’ possession as much as possible.

Geelong come into Round 12 off the back of a bye, so will be ready to go against Darebin who are still sitting towards the bottom of the ladder. The Falcons are in dire need of another win on the board to ensure they do not finish the season at the bottom. However, the Cats are on the brink of a finals spot if they can capitalise in the last five rounds so will be a tough competitor for the relatively inexperienced Falcons side despite having some big names back in the mix. A win for eighth-ranked Geelong could shoot the Cats up to as high as fourth, while a loss could mean a struggle to the finish line. Despite some better performances in recent weeks from the Falcons, the best they can hope for from the rest of the season is a better end than their start. Reni Hicks has applied some great pressure with an average of 10 tackles from eight games for the Falcons this season so is sure to put in the hard yards once more if she takes the field.

This match has the potential to be a game changer with Uni having a largely impressive few weeks while Carlton, despite sitting in the lower half of the ladder, have taken it to a few teams. The Blues have proved they have the talent and drive to make an impact on the competition, but have so far been mostly unable to execute. While Carlton certainly have the ability to compete with the Mugars, the side’s consistency has been questionable making Uni wildly unpredictable and a potential threat to top sides. From six losses, the Blues have only conceded an average of 15 points, with two margins under 10 points, a draw and a 33 point win in the past four rounds after the bye, showing the side’s steady improvement throughout the season. Carlton will have in-form leading disposal winner Kate Gillespie-Jones to contend with, however they have a solid team lead by Sarah and Jess Hosking that can back up across the board to deny goals, with the Blues’ main problem an issue of getting a winning score on the board.

NT Thunder will be looking to bounce back this round, taking on top four side Western Bulldogs in what will be a real test for the side after two tough losses in a row. But while the Bulldogs are up there on the ladder with six wins from 10 games, they have four teams hot on their tail with five wins and higher percentage ready to leap up the ladder with a win – NT being one of them. Despite a bumpy season, both sides will be ready for a win this week after losing in Round 11 to keep their respective sides in finals contention and bring back some consistency in the run home. Bulldogs’ Tayla Dinuccio (97 tackles) and Nicole McMahon (219 hitouts) are leading their respective stats while Danielle Ponter has proved to be a key target for Thunder with two bags of three in her past two matches for the side.

In arguably the most interesting match of the round, top of the ladder Collingwood take on third-ranked Richmond. While Collingwood is unbeaten in nine of their 10 matches for the season, Richmond’s impeccable start to the season has been soured in recent weeks with three losses in a row – including a 68 point slaughter in Round 10. The Magpies have been the most convincing team in the competition this season, posting big scores relatively consistently and despite coming close to losses they have kept ahead to continue their winning ways, beating teams by an average of 30 points. Despite Richmond’s average few rounds, the side still sits high on the ladder thanks to their impressive percentage and strong start to the season. A Tigers loss this week could mean they go down a rung on the ladder despite their percentage, while the Magpies will want a win with Southern Saints hot on their tail and only two losses on the board. Collingwood leading goalkicker, Jaimee Lambert sat out last week so could have a massive impact if back in the side this week, while Sabrina Frederick-Traub has the ability to be a big threat if fed well by her Tigers midfield.

The final match of the round sees the Saints host Casey in what could ultimately be the make or break match for the Demons’ season. While the Dees got a much needed win on the board last round, their six losses did not do them many favours and to be in with a chance to make finals they need to both win every single match to finish the season and rely on the top sides to falter at the final hurdles – Southern Saints included. While the Saints have been sat comfortable in second for a few weeks, the side will want to capitalise on their early success this season and get a win back after a loss to Collingwood last week. Caitlin Greiser is yet to finish a game without a score on the board this season, so is sure to be a big target once again for the Saints credit to her ability to find space and kick truly. For Casey, Bianca Jakobsson is having a consistent season across the board while getting a few goals on the board, while also sitting second on the board for marks across the season with 45, averaging five per game.