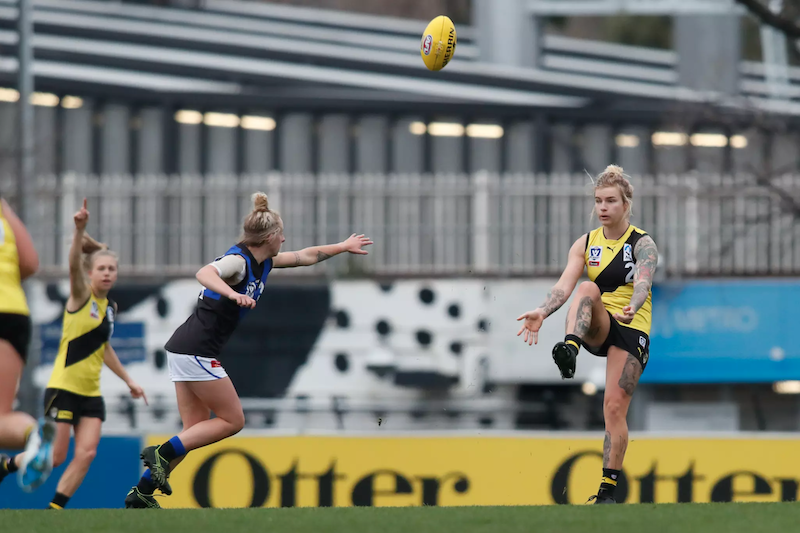 ANOTHER massive round in the VFL Women’s competition saw premiership contenders Richmond dealt a shocking loss, while Casey made it seven losses in a row after going down to Western Bulldogs.

Round 10 saw the first draw of the season, with Hawthorn leading for much of the game before Carlton chipped away at the lead in the final term with two goals on the board. The Blues came home strong for the most part in the final quarter, taking a lead before a Hawthorn goal seconds before the siren courtesy of Kara Henderson locked the scores at 24 apiece to finish the match. It was an inaccurate but fast start to the Hawks, who got six scores on the board but only one a major by the first break to lead by five points. Bryannen Gurr was a solid target inside 50 for Carlton, booting two goals from her 10 touches while the usual suspects in Sarah Hosking (22 disposals, 12 tackles, one goal) and Jess Hosking (23 disposals, four marks) lead disposals to provide valuable options across the field. For Hawthorn, goalkicking was shared around with Sarah Perkins and Rosie Dillon kicking a goal apiece, with Dillon racking up 23 touches and five tackles to be among the Hawks’ best. Leading disposals for Hawthorn was Jayde Van Dyk with 27 and five tackles, while Georgia Bevan racked up nine tackles.

Despite an even start, Casey dropped yet another game over the weekend to take the tally up to seven in a row. With a stellar team on site it looked like the Demons had it in them however the Bulldogs’ consistency and combinations across the field proved too strong. The Dees put in an impressive effort in the final quarter, kicking two goals nil but unfortunately were unable to get over the line after the Bulldogs’ convincing 20-point lead at three quarter time. In the win the Bulldogs were clinical, with Kirsty Lamb a valuable option across the field with 27 disposals and seven tackles and Sarah Jolly a great target inside 50 with 16 touches and two goals on the board. Tayla Dinuccio and Angelica Gogos provided immense pressure with their tackling intensity, laying a combined 26 tackles from 16 and 19 touches respectively. For the Demons, Lily Mithen starred in her first outing in the VFLW red and blue, racking up 23 disposals and 12 tackles and joined by Tyla Hanks (17 disposals, 15 tackles) and Libby Birch (20 disposals, five marks, five tackles) who made their mark on the contest despite not getting the win.

Williamstown put up a strong start against the Magpies but could not hold on after the first, going down by 25 points to the ladder leaders. But despite the margin, it was a pretty good effort for the Seagulls who have struggled with consistency all season, relying too much on one player to do all the heavy lifting. Both Sophie Alexander (15 disposals, five marks) and Chloe Molloy (21 disposals, four marks) piled two goals apiece onto the board, aided in their quest for victory with five others hot on their tail in front of the big sticks. Sophie Casey also picked up 20 touches and 11 tackles to lead the count. Williamstown may have missed some opportunities in front of goal but not for a lack of trying with a relatively shared effort across the field. With Mo Hope missing from the side the likes of Danica Pederson (19 disposals, five marks) and Jacinta Reid (14 disposals, four marks) had to step up, and were among the Seagulls’ best, while Ruby Tripodi racked up eight tackles. Sharnie Whiting put one goal on the board from her three attempts while Emma Inglis missed two that could have been a big opportunity to scare the Magpies.

It was a tug-o-war between the Saints and Cats over the weekend, with both sides finding pockets of dominance and unable to solidify a victory. However it was the Cats who came out on top, as Madisen Maguire kicked a winning goal late in the final quarter to secure the win. It was the second goal for Maguire, who also picked up 16 disposals and six tackles, joined by leading on-field disposal winner Richelle Cranston with 21 touches and four tackles. Both Kate Darby and Renee Garing racked up 19 touches, also managing a respective eight and 11 tackles. For the Saints, Alison Drennan was among the best with 20 touches and 13 tackles, while Kate Shierlaw and Courteney Munn kicked a goal apiece. Jemima Kelly had a solid performance in the ruck, racking up 31 hitouts – more than doubling Geelong’s hitouts alone, while Alison Brown provided a solid tackling option with nine tackles and 14 touches. While this loss is another chink in the Saints’ armour, they stay in second thanks to Richmond’s loss.

Darebin Falcons finally lifted themselves off the bottom of the ladder this week with a six-point win and impressive defensive effort to deny NT Thunder a comeback late in the match. It was a slow start, with neither side able to get a goal on the board in the first before Elise O’Dea kicked the first of the match in her first game of the season early in the second. O’Dea also racked up 33 disposals in a dominant performance, aided by fellow Melbourne AFL Women’s player Lauren Pearce (23 disposals, 34 hitouts, one goal). Reni Hicks was next in line with 16 touches and seven tackles while three other Falcons got a goal on the board each in their second win of the season. Anne Hatchard had another spectacular game for Thunder, with 37 disposals, seven tackles and seven marks in a well-rounded performance while Angela Foley (26 disposal, seven marks) and Deni Varnhagen (23 disposals) found plenty of the footy. Eloise Jones was the only multiple goalkicker for the match with two to her name.

In a shocking turn of events to finish the round, Richmond were dealt their second defeat in as many weeks when they fell to Melbourne Uni by 68 points. It started out as a very close affair with neither side able to pull away before a three goal nil second quarter saw Uni lead by an unprecedented 28 points at half time. With an entire second half looming there was still plenty of time for the Tigers to claw back, but while Richmond applied some good physical pressure they were still unable to score, finishing the match down by 10 goals. While Uni were phenomenal, it was only thanks to misses across the face that Richmond stayed in it for as long as they did, with the Muggars registering 11 behinds to match their 11 majors. For the Tigers, Sabrina Frederick kicked the only goal for the side but was mostly missing in action on the field credit to Uni’s zoning pressure. Grace Campbell (17 disposals, 14 tackles) and Gabrielle Seymour (11 disposals, 43 hitouts) were among the best in the losing side. Melbourne Uni’s forward-line ran wild throughout with the likes of Jasmine Garner (26 disposals, three goals, six marks, seven tackle) and Ashleigh Riddell (28 disposals, two goals, five tackles) putting on a show, aided by Katie Angelis and Brittany Gibson who both also kicked two.