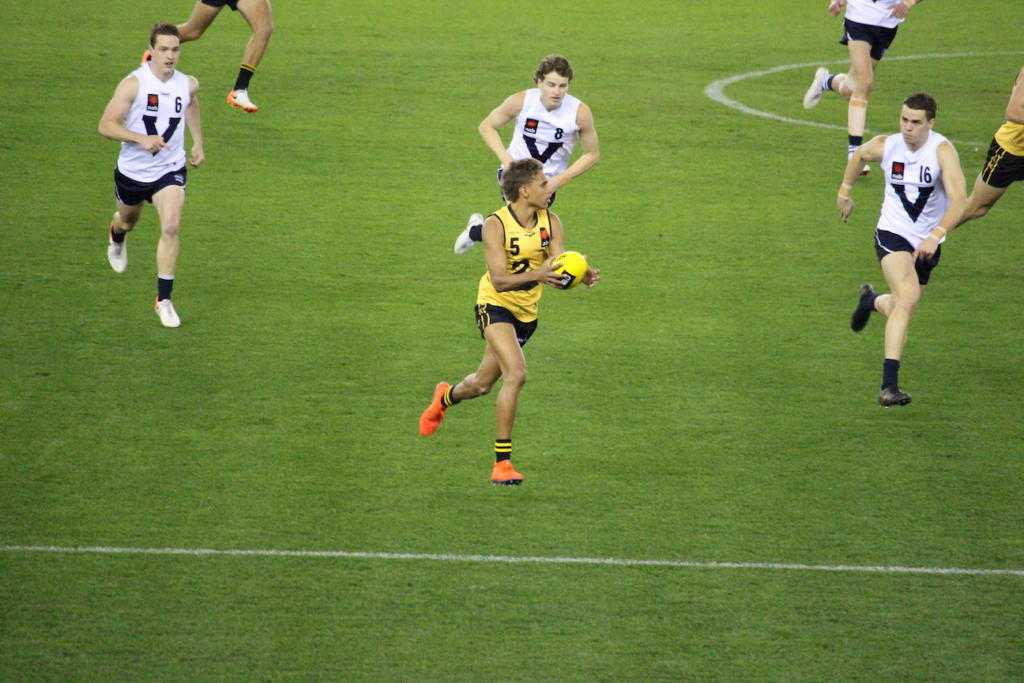 WESTERN Australia took out the AFL Under-18 National Championships title with a narrow victory over Vic Country thanks to a goal after the siren. We were on hand to note down some of the prominent players, with all notes opinion-based of the individual writer.

Had one of the more quiet halves he has had on the big stage with just four touches in the first half against Western Australia. Visibly frustrated as he came to the bench at one point in the second term, Serong came out with intent in the second half to pick up 12 touches and finish with 16 by the final siren. Only the one effective kick, but buried himself under the packs and won 10 contested possessions and four hardball gets. Not the best game overall, but he was able to inspire his team more in the second half and it was a key reason Country got back in the contest. His overall carnival was superb and he throughly deserved his Country Most Valuable Player (MVP) award and All Australian honours.

Was one of the more dominant Vic Country players early, but let himself down by foot in the first half, with four clangers by half-time. He was winning the ball in tight and able to get it out to his teammates and keep it moving, but found himself under pressure when at defensive stoppages and had to throw in on the boot. After half-time he was sharper by foot and ended up with a team-high 24 touches and seven clearances as the dominant inside midfielder on the Country side. He almost had a quarter of his team’s clearances and continued what was a marvellous carnival with an All Australian jumper.

Underrated performance by the GWV Rebels’ midfielder who while he made some mistakes, kept trying to take the game on and would have been high up there with metres gained. He almost created a highlight-reel burst out of the middle at one point but just slipped with a bounce and had to rush to get it out, and on another occasion was sold into trouble by a teammate. As a whole, he was one of the better Country players and he has good vision that sets up teammates laterally and opens up scoring opportunities. He looked most comfortable on the wing and was able to execute the kick inside the corridor, and also provide some opportunities for teammates going forward.

Like many of his teammates, he seemed a tad off in the first half with a couple of clangers – something that no-one associates Ash with given his elite kicking skills. He shook that off in the third term, as he burst off half-back, won a one-on-one against Liam Henry, took on the opposition and then with a dart inside 50 hit-up Brodie Kemp for a goal reminiscent of last week’s match winner against South Australia. His foot skills in the second half were back to what we have come to know from the exciting runner, and he and Hayden Young’s slicing kicks were forcing Western Australia onto the back foot. Finished with a team-high eight rebounds, five more than his next highest teammate.

Just kept buzzing around the stoppages and running all day, using quick hands in close and when in space to open up opportunities for teammates. Knowing his own strengths, Rantall executed under pressure handballs to good effect and went in hard to win a team-high amount of hardball gets. He also was able to win a number of important clearances around the ground and had a flying shot on the goal to create something out of nothing, but missed.

Another standout game for Country and continues his ascent up draft boards with some crucial marks inside 50. He booted two goals from four scoring shots, and always threatened to be a danger in the air. One of the few consistent Country performers across the game, Kemp spent a lot of time on the inside and then went forward, winning 11 contested possessions and taking two contested marks. His strength in the air or at ground level was clear, and he was able to pump the ball inside 50 on numerous occasions. While he still made some mistakes by foot, Kemp was another player who took risks and was willing to put it on the line to try and win the championships for Country. A deserving All Australian member.

When Young hit-up a Western Australian opponent 40m out with a short kick from deep in defence under limited pressure, it was clear Vic County were not on their game early. Similar to Ash, Young and clanger kicks do not belong in the same sentence, and he fixed that in the second half with some terrific long bombs to find teammates in difficult positions but made it look easy with his ability. One kick that exemplified what Young is capable of came in the final term when under pressure he kicked 40m across his body inboard, over a few West Australian opponents to land in the lap of the running Isaac Wareham who did not need to break stride. Also collected an All Australian jumper for his carnival.

The tall defender was Country’s best player if you take into account all four quarters. When very few were standing up, he was repelling attacks in the back 50 with strong intercept marks and rebounds out of defence. He came in with timely spoils on the lead and was able to nullify his opponents one-on-one. He also settled down the defence and kicked long out of the back half, though did make mistakes by foot. De Koning was at his best when able to drop back and take a settling mark then set up plays from defence to attack.

Until he injured his knee midway through the first quarter, Garcia was arguably Western Australia’s best player. He provided a heap of energy and zip around the contest and proved to be a damaging link-up player. His final statistics were seven possessions, three clearances and two tackles.

The Fremantle Next Generation Academy member increased his draft stocks with another exquisite performance. Against the ‘Big V’, Henry racked up 25 possessions, took six marks, recorded five rebounds, laid five tackles and produced four inside 50s. His mercurial ability to weave his way around opposition pressure, before composing himself and finding a team-mate in space, is extraordinary for someone his age.

Another bottom-age prospect, O’Driscoll was brilliant on the half-back line for the Sandgropers. He finished with 21 possessions, six tackles, four marks, four inside 50s and two rebounds, providing good zip on the outside and damaging run forward.

The WA Under 18 captain continued his magnificent campaign that saw him win the Larke Medal and the WA U18 MVP. Against Vic Country, he accumulated a game-high 28 possessions, laid eight tackles, won six clearances and recorded six inside 50s to be WA’s best player. His contested possessions and clearance work were outstanding and pivotal for WA’s victory.

The match winner – Clarke will go down in WA history after he kicked the winning goal with five seconds to go in the final quarter. After taking the mark, Clarke was able to duly convert his set shot to give WA its first Championships triumph since 2009. But he was also fantastic throughout the game, finishing with 14 possessions, seven marks, three inside 50s and two tackles.

The Willetton product was busy in the midfield for the Sandgropers, often throwing himself into stoppages to win the contested possession for his team. He finished with 22 possessions, six inside 50s, five tackles, four clearances, and three marks. Warner shares similar traits to West Coast star Jack Redden – both are clearance machines and get the ball going forward for their respective teams.

The reigning All-Australian put forward his best game for the WA at this year’s Championships. Against Vic Country he finished with 20 possessions, 11 marks, and a goal. His penetrating kicking, line-breaking ability and composure with ball in hand were all on display.

The no-nonsense defender produced another solid performance for the Sandgropers. Lined up on Josh Smith, Pasini only gathered seven possessions and took two marks, but restricted Smith to five possessions and no goals.

The runner-up in this year’s Larke Medal, Jackson showed why he is considered to be the best ruckman in this year’s draft pool. He accumulated 19 possessions, won 37 hitouts, five clearances, recorded five inside 50s, took three marks and laid two tackles to be one of the most influential players for Western Australia. His follow-up work and ability to cover the ground are elite for a ruckman his age.

The bottom-ager was excellent in defence for the Sandgropers, often thwarting many of Vic Country’s attacking forays. Stationed at centre half-back and opposed to Elijah Hollands, Grainger-Barras accumulated 13 possessions and took eight marks, while Hollands gathered 14 possessions but failed to kick a goal.