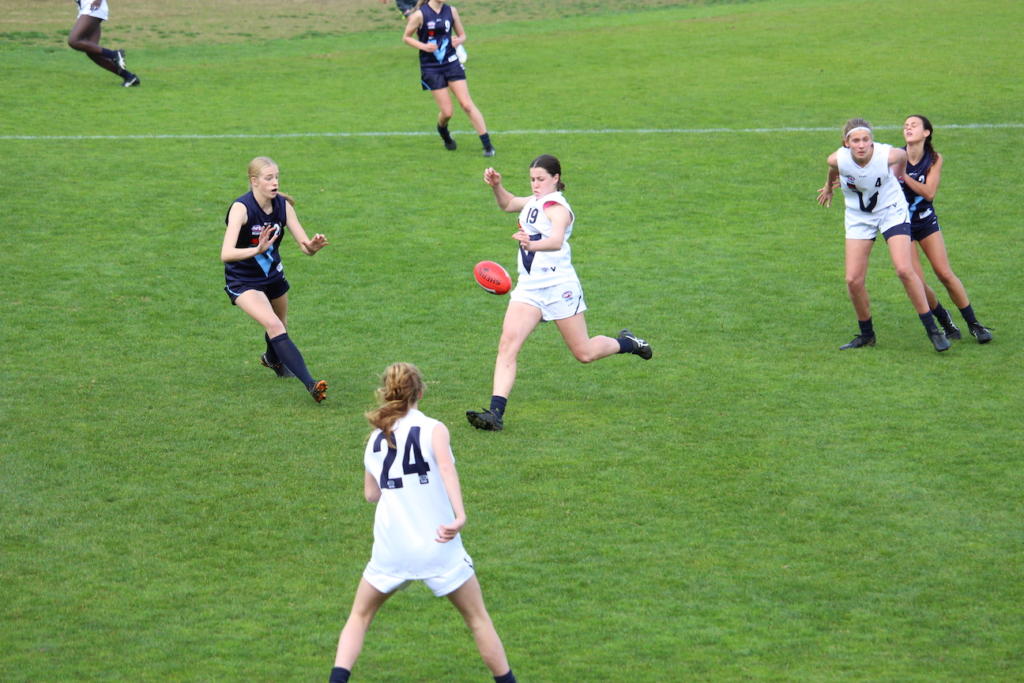 VIC Country’s Under-16 side has triumphed in the final game of the AFL Women’s Under 16 Championships, running over the top of a fast-starting Metro side with a final quarter burst. Murray Bushrangers’ Keeley Skepper starred, roaming around the ground and having an influence across four quarters, while Matilda Hardy and Emelia Yassir were equally impressive through the midfield for the Metro side.

Metro dominated the opening term but it was Geelong Falcons’ Analea McKee who hit the scoreboard first with great body position one-on-one to run onto a loose ball over the back and put her side on the board. It did not take long for Metro to apply the possession dominance to the scoreboard, with Sandringham Dragons’ Ebony Angelopoulos putting the Metro team back in front, followed by majors to Calder Cannons’ Tahlia Gillard and Northern Knights’ Maykaylah Appleby.

Trailing by 14 points at the first break, it was Country’s turn to control possession but not impact the scoreboard, until McKee slotted her second at a crucial time to pump up her side. Luckily for Country, Metro could only manage the one behind, as the likes of Geelong Falcons’ Elizabeth Dowling and Bendigo Pioneers’ Tara Slender were rebounding everything out of the back half, while Gippsland Power’s Macie Gilmour was strong around the ground, taking a huge mark late in the term, coming off worse for wear before returning after the long break.

When Sandringham Dragons’ Charli Murphy converted her set shot after a strong mark inside 50 early in the third, and Metro was looking dangerous, the signs were ominous for Country. Little did the crowd expect, Country was about to take complete control with the four last goals of the game. Murray Bushrangers’ small forward, Cassidy Mailer converted, as did Gippsland Power tall, Tyla Angwin to draw level by the final break.

With the game evenly poised, Country was the team that took the game on and Gilmour and Tahlia Meier both converted goals to put the result beyond doubt, holding Metro scoreless in the final term to run out 6.8 (44) to 4.6 (30) winners. Grace Matser‘s work in the ruck was impressive with the Gippsland Power tall having an influence around the ground, while Calder Cannons duo, Kasey Lennox and Peppa Poultney were also impressive across the four quarters.

The victory was well deserved for a Country side that controlled play after quarter time, booting five of the last six goals of the match to enjoy a victory over the short series of matches. While Metro could not take home the chocolates, they celebrated a win previously against NSW/ACT Rams, while Country went down to South Australia. For the Under-16 players, they now head back to their local clubs as they keep an eye on their Under-18 teammates on the Gold Coast, aspiring to be in their shoes in 12 and 24 months time.