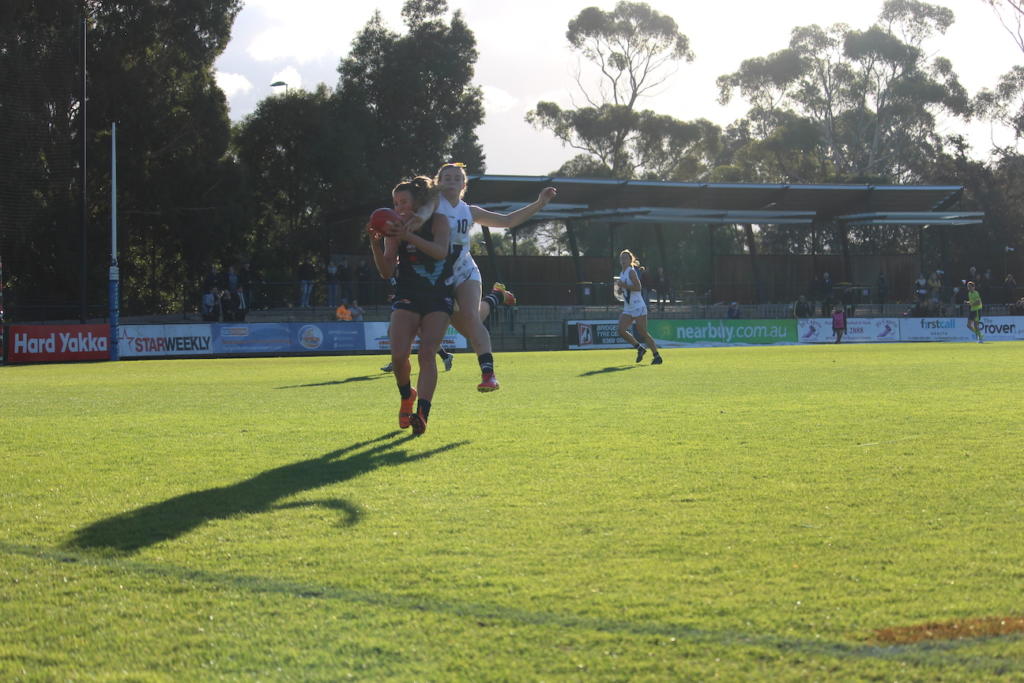 IN an impressive game of skill and pressure, Vic Metro got the better of Vic Country for the final Round 1 game of the AFL Women’s Under 18s Championships. Metro won by 44 points and now head up to Queensland full of confidence, while Country will be keen to follow last year’s lead and bounce back from the Metro loss to win against their three opponents up there. Below are Taylah Melki‘s opinion-based notes from the weekend’s match.

She worked hard throughout the game and won a heap of the footy over the four quarters. Really good mover across the field and showed good football knowledge to use the ball well and think her way through defence. Always seemed to be in the right positions at half-forward or on a wing for the quick kick out of defence by Country opponents. She would often use her composure to think her way through situations and hit-up targets going forward. Playing through the inside, Lagioia also showed a different element to her usual run-and-gun skilled game with some contested ball winning ability too.

Georgostathis impressed throughout the game winning the ball time and time again. She had good positioning in the forward 50 taking a clever mark but was unable to capitalise early in the first quarter missing to the side. She continued her hot form with a very impressive goal on the fly off a few steps and slotting it right through the middle early in the second quarter. She showcased her good hands in close and was clean off the deck. She applied good physical pressure with some crunching tackles throughout the match and attacked the ball hard to win the footy and dish it off to teammates.

McClelland was busy early on and did well to try and repel the forward forays that came her way. Good user of the footy to kick lace out through the middle of the ground and find a teammate in space. She was a real bull around the contest and used her physical pressure to try and out body her opponent. McClelland seemed comfortable behind the ball and was able to push up the ground and kick long when requited.

Bannan made her presence felt on the scoreboard for Vic Metro with a goal right on the siren in the opening term with the ball rolling through. She presented well up at the footy to take a strong mark on the lead but was unable to capitalise in front of goal in the third term. But she quickly made up for inaccuracy credit to some good body positioning and strong hands above her head to take a big mark just inside the goal square and nail her second goal. Bannan showcased some real attacking flair with a run along the wing, pushing off four opponents and working her way through traffic. She went for a bounce but the ball did not sit for her but worked hard to win the ball back. Nailed her third goal in the fourth quarter, highlighting her good movement in the forward 50 and cleanliness with ball in hand.

Really good around the contest, clever mover through traffic to keep her arms free and release the ball to a teammate. She applied good tackling pressure to bring her opponent to ground time and time again and showcased her strong hands under pressure. Patrikios displayed her ability to read the flight of the ball and take a couple of big grabs while also appearing to have plenty of time and space to make clever decisions with ball in hand.

Found plenty of the ball throughout the game appearing to have the ball on a string. She used the ball across the field and showcased her vision and intent to move the ball forward on multiple occasions. Used her nice long kick to penetrate through the opposition defence and took a couple of really strong marks credit to her ability to read the flight of the ball. Impressed with arguably one of the plays of the day streaming down wing and showcasing her speed with 5 bounces ending in the forward 50. McKenzie won plenty of the ball and was a real general across the ground dictating space and delivering the ball to her teammates well. Displayed all her skills and spatial awareness to run through the middle of the ground and just open up the forward 50 time and time again.

Hartwig had a day out down in defence and was a real general down back controlling the forward forays. She won plenty of ball and stood up time and time again in one-on-ones. It was easy to identify what she was doing as time and time again once she knew Metro had numbers covered at the stoppages, she would drop back a kick behind play in case Country cleared the ball out of the stoppage with a bomb on the boot. Taking plenty of intercept marks, she was also able to identify targets up the field, and if she did not mark it, she would spoil her direct opponent, or peel off and come across as a third player up. One of Metro’s best and used it well on the attack.

Good crumbing goal showcasing her goal sense and footy smarts to take a few steps around her opponent and then snap it straight through the middle after missing her first two shots at goal. Posed a dominant threat in the forward line kicking another goal in the third quarter after picking the ball up off the deck and using her body positioning to get around her opponent and slot it through the big sticks.

Grant took a big mark in the opening term and kicked the first goal of the game squeezing it through the big sticks to kick start Metro’s campaign. She took another solid mark in the first quarter and was awarded a double 50 metre free kick and kicked truly nailing her second goal of the game in the first quarter. She consistently presented well up at the footy causing havoc in the forward line and won another double 50 metre and scored from directly out the front

Newton had a hot start, involved in everything early. She showcased good composure to kick a perfectly weighted pass along the wing and found good space across the ground. She ran hard throughout the match to provide strong leads and options across the field. Was not afraid to get involved in the contest applying good tackling pressure and presented well up at the footy. Posed a threat in all areas of the ground offering strong leads in the forward 50 gathering the ball that popped out the back and banged it straight through the big sticks to kick her first for the game. Used her strong hands and good vision to punish the opposition.

Worked hard throughout the four quarters and particularly stepped up in the second half with the game slipping away from Country. Put her body on the line time and time again and ran hard to win touches through the middle and set up attacking plays. Applied great defensive pressure on the ball carrier throughout the match as well and was one of Country’s best in that area.

Relatively quiet day early given Metro’s forward half dominance, but left her mark on the game with a quick couple of steps and a goal midway through the final quarter once Country had a sniff going forward. She showed that she has what it takes to be an impact player slotting another goal in the final term credit to her goal sense and clean hands. Just finds space and is clever around goal.

Lesosky-Hay was busy early on winning a heap of the ball and working hard across the ground to get into damaging positions. She was not afraid to put her body on the line and contest for the ball both in the air and at ground level.

A key player down in defence, read the play really well and contested hard at every occasion. Locke took a heap of big contested marks and kept her feet. She used her strong hands to win the ball back for her side and dished off a couple of well weighted kicks to teammates. She showcased her good hands under pressure and covered the ground well to consistently impose herself on the contest winning her fair share of the ball.

Provided some trademark run off half-back and along the wing, trying to break the lines going forward. It was tough for her to get too much happening with the ball camped in the Metro’s defensive half, and with Metro’s defenders, such as Sarah Hartwig and Isabelle Pritchard so well set up forward of centre. She kept trying throughout the four quarters and did have a few nice plays across the game.

Molan was good in close and worked tirelessly around the contest to win the ball for Country. She showcased her strength in the air with a big contested grab and was strong overhead to go back with the flight and put the mitts up.

Brown had a blinder winning a heap of the footy and using it well. Really safe set of hands and played a solid role down in defence. She really controlled the defensive 50 and worked hard to try and nullify the influence of her opponents. Consistently showed good intent to move the ball forward and make her presence felt across the field. Brown highlighted her footy smarts reading the play well and floating into the right spots in the defensive 50 to regain possession for her side. She was careful and precise with ball in hand making the most of her possessions.

McEvoy led from the front all game accumulating plenty of the ball and using it efficiently. Lowered the eyes and used the ball well to kick the ball lace out to a teammate on the lead. She showcased her strength to take a big mark despite the oncoming contact and pressure and dropped into the holes taking a good intercept mark. She used her long booming kick to move the ball forward and create scoring opportunities. McEvoy positioned well across the ground and just consistently imposed herself on the contest, involved in everything. She pushed hard in the final term to try and create a spark. She moved forward and applied good pressure to try and create shots on goal but was unable to capitalise in the last quarter only registering a minor score.