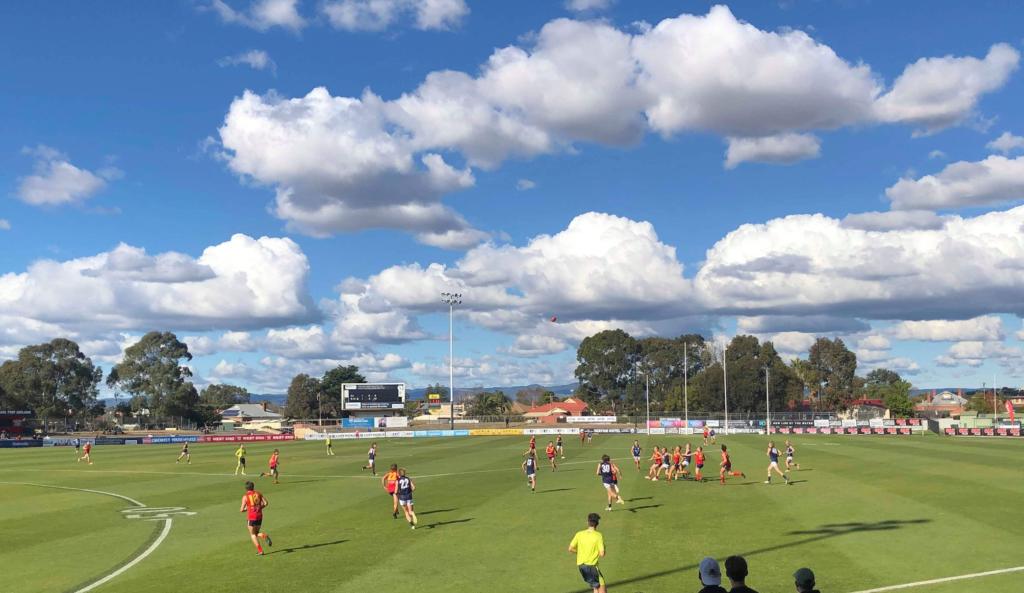 THE highly-fancied Vic Metro team finally got on the board with an impressive 17-point win over South Australia away from home. Tom Wyman was on hand to review the action, and take some opinion-based notes on the outstanding players.

Much like the first game, ‘Kossie’ showed glimpses of his brilliant talent but was unable to have a genuine influence on the game for long enough. He presented himself well, had sharp hands in-close and looked threatening when the ball was in his vicinity, but it was ultimately not his day with Metro on top.

The Norwood midfielder gathered 18 touches playing a typical inside/outside role in the South Australian midfield. However his ball use for much of the day was inaccurate with many leading to turnovers. Despite this, he worked hard all day, but will be looking to improve in the remaining two matches.

The South Australian wingman was amongst his side’s best on the day, collecting 19 disposals. He showcased excellent vision to pinpoint a kick inside-50, leading to a shot on goal in the final term, before following it up minutes later with a strong contested mark. There are a number of traits to like with Shute, who would have impressed a few on the day.

Day produced yet another strong performance in defence for the Croweaters. His athleticism and aerial ability are fast becoming trademarks of his game, with his intercept marking and ball use excellent for the majority of the afternoon. Although his light frame saw him taken to ground on multiple occasions, there is a reason why recruiters view Day as a high-potential pick once he is able to add size.

Woodville-West Torrens on-baller Harry Shoenberg was the leading possession winner on the ground, finishing with 29 disposals. Perhaps the Croweaters’ best performer in an otherwise uninspiring showing, Shoenberg was seemingly everywhere, with a strong tackle in the opening term leading to a holding the ball. His ability to find the ball at will should appeal to AFL recruiters.

Potential Port Adelaide father/son Jackson Mead was again effective through the middle for South Australia. Early in the first term he set the tempo with multiple clearances and a strong tackle. However, like many of his teammates, Mead wasted the ball on multiple occasions, with a momentum killing inside-50 turnover particularly standing out. Was strong in the contest throughout, however, opposed to a talented Metro midfield brigade.

Potential Crows father/son Luke Edwards showed why he should be included amongst the top prospects in the class of 2020. At 187cm he is a good size which allows him to compete strongly one-on-one against the top-aged boys. With 18 disposals, Edwards had no issues finding the football. He generally used it well, playing across half-back (at times stationing himself in ‘the hole’ in-front of the key forwards) and also in an inside midfield role. Dribbled home a goal in the third term in an attempt to kickstart SA after half-time. Certainly one to watch for next year.

North Adelaide on-baller Harrison Magor spent time on Metro stars Matthew Rowell and Noah Anderson at different stages throughout the day. He was particularly busy early on and finished the day with 18 disposals.

Searle did some handy things for South Australia, including nailing two shots and taking a strong mark, however his impact was admittedly limited until the final term with the game almost beyond doubt. Likely did enough to hold his position for the next game.

Gould was solid, if unspectacular, in the 17-point loss. Starting the day forward, he was unable to get going early on but returned to the backline soon enough, where he was able to get his hands on the football. With the likes of Karl Finlay and Dyson Hilder taking the key forwards, Gould was able to play his natural role as the ‘kicker’ out of half-back. He was composed and hit most of his targets by foot.

Full-back Karl Finlay stood up well despite his side conceding a multitude of inside-50’s. With his socks pulled up in typical fashion, Finlay reinforced his claim as one of the leading key defenders in the draft class.

Small forward/midfielder Jack Mahony was busy early and concluded the outing with 22 disposals with his pressure and intensity key features. A run-down tackle, backed up by an accurate set-shot got the Vics going in the second quarter.

Bianco was again impressive in his role as a small defender off half-back for Metro. He collected 25 disposals, with many of them providing meaningful damage from defence. His run and carry was crucial in driving his side forward.

It was another typical, workmanlike day at the office for star Matthew Rowell. His enormous work-rate was evident throughout the day as he battled hard, doing a high proportion of the grunt work for Metro. He finished the outing with 26 disposals, with his run and carry, strength overhead and efficient hands in-tight of particular note.

Anderson, skipper of the victorious Metro side, led from the front in what was likely a best on ground performance. Clearly a class above his opponents, Anderson nailed two goals for the visitors, with his sharp kicking (over long and short distances), vision and decision-making standing out. He collected a team-high 27 disposals and was also an aerial threat up forward, doing his pick one aspirations no harm.

The Sandringham Dragon defender was solid all throughout the contest, playing as a key defender. McAsey did some of his best work in the air, taking multiple big grabs and completing a series of intercepts. Despite SA being renowned for their backline, McAsey was arguably the best defender on the ground as his stocks continue to rise.

After booting four goals against WA the week before, Josh Worrell added another three to his tally. The tall utility was dangerous in attack all day, constantly posing a threat to the South Australian defence. After South Australia kicked the opening two goals of the second half and appeared to be gaining the upper hand, Worrell’s smother and goal from the square halted the surge and swung the momentum back in favour of the Vics. His overhead marking was also notable.

In his first game of the Championships, Western Jet Emerson Jeka presented well at full-forward for the Victorians. Jeka took numerous marks on the lead however he could well have made a greater impact on the scoreboard, missing multiple set-shots. He proved difficult to contain, despite South Australia’s strong key defensive options.