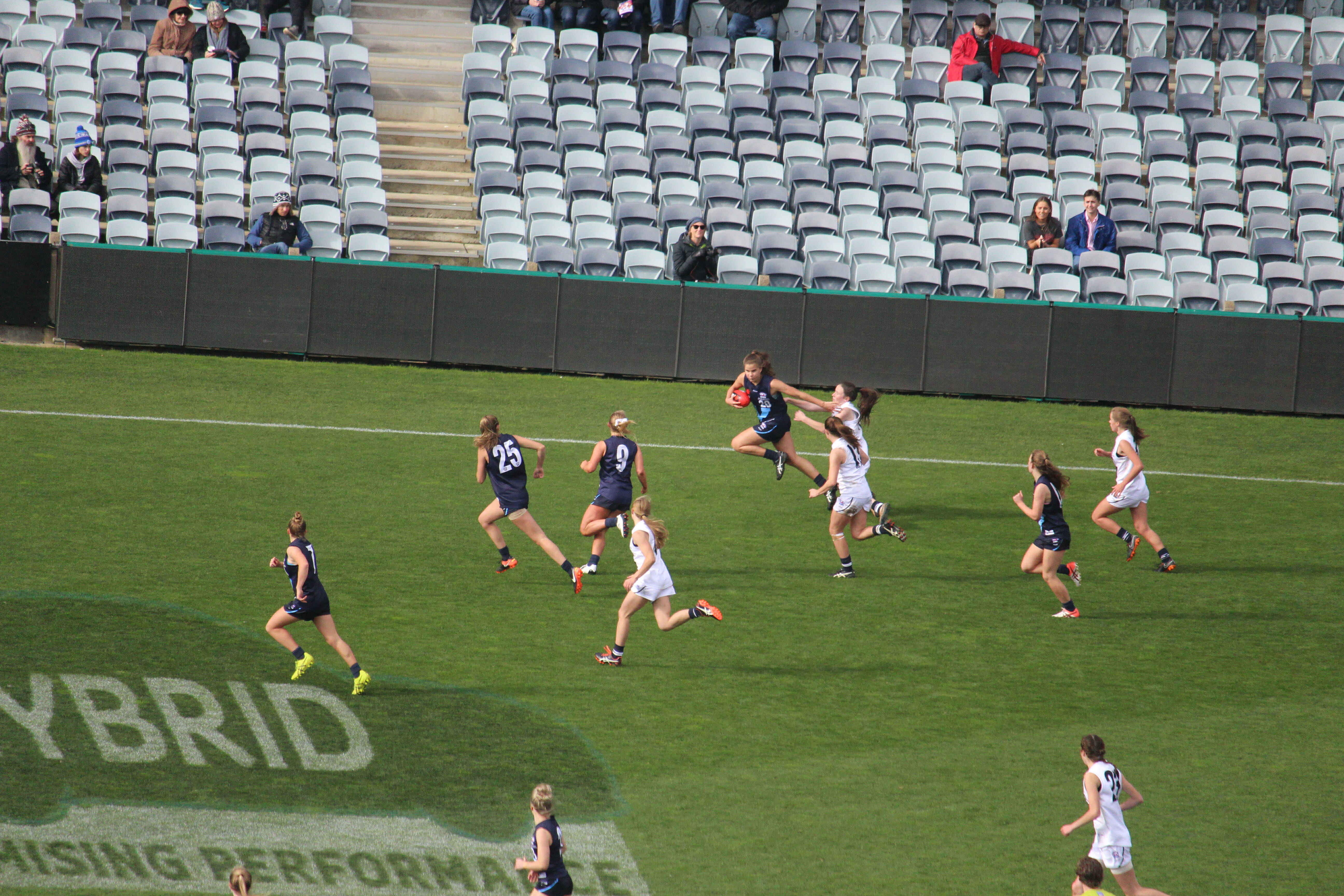 VICTORIA’S top under-age female footballers lock horns in the final game of the AFL Women’s Under 18 Championships Series One. Vic Country takes on Vic Metro at Avalon Airport Oval tomorrow, with both sides packed to the brim with talent. After facing off in the NAB League Girls competition all year, the best of the best now team up for state pride as they prepare for Series Two of the competition up on the Gold Coast in a fortnight. We take a look at both sides and analyse the key strengths of the teams.

Note: The game will be live streamed via the NAB League website with commentary from Under-18 and VFLW commentator Matthew Cocks, and Draft Central Chief Editor Peter Williams.

Vic Country is unsurprisingly packed with 2018 premiers and 2019 finalists, Geelong Falcons, with nine of the 24 players named in the Country squad from the Falcons team. Given exciting forward Mia Skinner is injured, their representation could well have reached double figures for the Aasta O’Connor-coached side. The aspects to like about Vic Country will be their defence, hardness at the ball and the X-factor up forward.

The Country side has two genuine lockdown talls who can also provide some rebound in Abbey Chapman and Kate Douglass, while Millie Brown – named at full-back is an offensive defender with a terrific set of hands and can push up into the midfield to provide support. Brooke Vernon was the best rebounding medium defender this year and having her at half-back will be an asset, while seeing Isabella Shannon named in the back half is a surprise, but just shows her versatility having played mostly through midfield and up forward. She does have the capacity to drop back into the hole in defence, and no doubt she will be required to do so with the tall Metro attack likely to stretch the defence. Sophie Locke will likely lock down on a smaller opponent – perhaps Nicola Xenos or Jess Fitzgerald when forward – while Daisy Smith can do the same, although she is more likely to play tall. Given the height and marking ability of the Metro side, they might need three talls in defence to counteract Metro’s strength in the air.

2. Hardness at the ball

If you look at the starting five midfield of Brooke Hards, Luka Lesosky-Hay, Tyanna Smith, Lucy McEvoy and Molly McDonald, the first thing that comes to mind is – you would not want to be an opposition midfielder. They attack the ball hard, and will rack up the contested ball and is an area they can exploit Metro. Smith has a point of difference with her pace, as does the outside run of Elise Vella coming off the bench, but the speed that Metro possesses will trouble the Country side. It is why winning it at the coalface is so important, and McEvoy, Hards and McDonald in particular will not take a backwards step, being captains and potential future captain of their respective NAB League girls clubs. With Maggie Caris in the ruck, the midfield will get first look at it more often than not, and that midfield also includes the likes of Sophie Molan and Laura Gardiner coming off the bench, as well as Paige Sheppard and Darcy Moloney who can rotate through there, as can Shannon and Brown.

The named Vic Country forward line is almost one to watch for 2020, with four of the six starting forwards not eligible to be drafted until next year. The two exceptions are Shanara Notman – an exciting key position player with a huge leap and terrific hands, who has spent time in defence this year for Gippsland Power after sitting out last year – and Paige Sheppard – who is one of the better kicks in the team, setting up forward plays with great precision kicking and vision. Otherwise, the remaining four still have plenty of time to develop, with Olivia Barber one of the most exciting key forwards coming through, able to make the right leads and clunk marks, just needing to iron out her set shots at times. Isabella Simmons is a tall prospect with good athleticism who roams up to the wing and can play tall or small at ground level, while Darcy Moloney and Renee Saulitis are clever forwards who if you give them an inch will take a mile. Moloney has spent time in the midfield for the Falcons this year, while Saulitis has also proven to be a more than capable defender, so versatility is something the Country side has in spades. The forward line has the nice balance of talls and smalls, and of course chuck in Renee Tierney and Georgia Howes off the bench – Howes will also share the ruck load with Caris – and there is plenty of scoring potential there.

Vic Metro will head into this game pretty confident following their win over Vic Country last year as arguable underdogs. This year they will likely go in as favourites, but it is predicted to be a tight contest. There are quite a few reasons for their favouritism, but the forward line marking ability is the number one aspect, while others include their speed, and intercept marking.

The Metro side has a dynamic forward line, with many incredibly athletic at ground level and can impress in the air or at ground level. The two that are the genuine key position players – Cleo-Saxon Jones and Nell Morris-Dalton – are arguably the two best contested marks in the competition this year, and throwing them into attack with Gabby Newton, Isabella Grant and Alyssa Bannan means the attack has a massive advantage for high balls coming in. The Vic Country defence will need to be on their guard with the forward line also capable of pushing up the ground and rotating through the midfield with any one of those five capable of playing as a key position player, while all have the possibility of giving a chop out in the ruck. Nicola Xenos is the sixth forward, who adds more speed at ground level and can also play out of defence or along the wing. Emma Horne, Jess Fitzgerald or Bella Eddey are all named on the bench, and the trio can add that smaller element to the forward mix, particularly Eddey who can play tall or small with plenty of X-factor.

Having already spoke about Vic Country’s advantage on the inside, Vic Metro’s advantage is on the outside, and particularly with speed. Most of the starting midfield has serious wheels, with Gemma Lagioia, Ellie McKenzie and Mimi Hill all capable to taking off on runs. Georgia Patrikios is the most agile player in the competition, so expect her to use her trademark sidestep to get around opponents, while Britney Gutknecht can also get herself out of trouble. While Country does have more hardness on the inside, McKenzie and Gutknecht will form the same bond they did in the Knights’ premiership side, looking to extract the ball out to their runners, or take the game on themselves. Fitzgerald is another who adds to the speed and is one of the best kicks in the side, while Marguerite Purcell also adds some outside run. Alana Barba was one of the most prolific tacklers in the NAB League Girls competition, so she will assists Gutknecht and McKenzie rotating off the bench, while Elisabeth Georgostathis will likely spend time through the midfield and rotate with Alice Burke off half-back. If the Vic Country midfield gets on top on the inside, do not be surprised to see Georgostathis and Burke thrown into the middle with Gutknecht or McKenzie to add some extra grunt. Molly Denahy Moloney will hope to counteract the leap of Caris, but does have her when it comes to around the ground, with Denahy Moloney one of the better athletes among the talls.

We talked about the strength in the air in attack, but the embarrassment of riches down back in terms of the three tall defenders is a luxury that Vic Metro has. Sarah Hartwig and Isabelle Pritchard are arguably the two best intercept markers – along with teammate Sarah Sansonetti and Country duo Brown and Chapman – and they will likely pick off anything that comes their way. They can all play as rebounding defenders or to shut down their opponent, with Sansonetti the top shutdown tall, while Hartwig is the top rebounding tall. The mix can be swapped around depending on how games play out at the championships, but to have the three – two of which are middle-age and will form the key defensive partnership next year – is something Metro coach Nathan Burke will love. With running machine Felicity Theodore and Alice Burke also back there, the Metro team have speed and defensive pressure that can run down forwards heading into goal. Laura McClelland is more often known for her ability in the forward half, but she can mark the ball and find space well, adding to the height in defence. As mentioned, Georgostathis is another player who might rotate through the defensive mix, while Barba is also known to drop back into defence at times, allowing for some versatility for the Metro coaching staff.