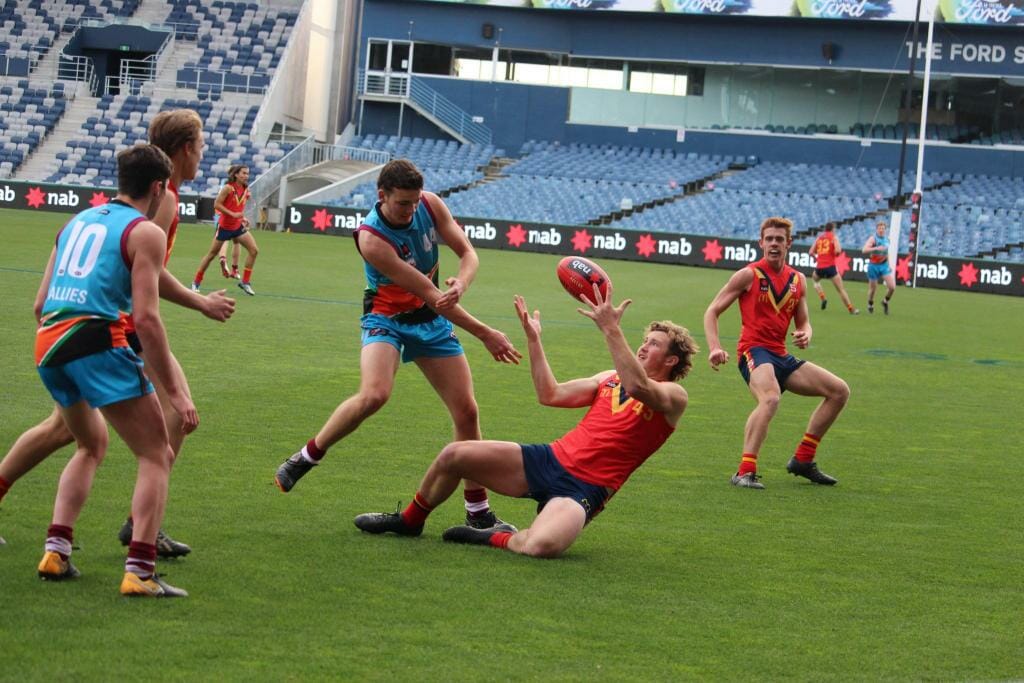 SOUTH Australia is primed to again be one of the leading teams at this year’s U18 National carnival, with a bunch of top-end prospects set to individually thrive among the talented squad. With some of those stars having broken into League and Reserve sides in the South Australia National Football League (SANFL), expect them to mix grunt with obvious x-factor.

A silky half-back who uses the ball well on both sides of his body. Has made a good return from injury for school side, Sacred Heart and is primed to make an impact over the championships. Look for him to link up with the likes of Jackson Mead if he remains on the outside, looking for clever ways forward.

The big-bodied defender often plays above his height on the back of his incredible physicality, but also has the traits to play smaller off half-back. Expect to see him play both roles during the championships through a mix of high marking and effective rebounds, with a stint in the midfield also possible should SA require some grunt. Has held his own at League level for Glenelg, and will be a real leader for his side.

One who can make a real difference on the outside with his skills and penetrating kick, Mead is the son of inaugural Port Adelaide best and fairest winner, Darren. Does not win massive amounts of ball, but has important touches and may even counter that with a move into the centre bounces. Is also capable of finding the goals, and looks most dangerous when given time and space going forward.

A classy mover and user who has broken into the Norwood senior side despite his light-on 70kg frame. While his SANFL League outings have mainly been spent on the outside, expect to see Stephens right in the thick of it for South Australia at the carnival as one of their prime movers through midfield. Has risen even higher in stocks of late to be touted as his state’s leading prospect.

Will look to follow in the footsteps of brother, Mihail by representing South Australia having enjoyed a solid start to the year with Rostevor and Sturt in the U18s and Reserves. Is a damaging type who can find the goals from further afield, but will likely feature off half-forward for SA. Lochowiak is already solidly built, and should make an impact that way in high pressure games.

Morris’ stocks have risen on the back booting a mammoth 27 goals in five games for the Eagles U18s, seeing him slot straight into the SA side to face WA. Does not see a huge amount of ball, but certainly makes an impact deep inside the forward 50 arc and will likely play one-out at times. Is one of the form players coming into the carnival, and should catch a few eyes with his pace and goal sense.

A true embodiment of X-factor, Pickett has already caught the eye on many an occasion this year. Standing at just 170cm, you cannot help but notice ‘Kozzie’ as he flies for high marks and shows his nous around goal. The nephew of 2004 Norm Smith Medallist, Byron, Pickett is a typical small forward with bucketloads of natural talent. Expect a few highlights out of him throughout the carnival.

A dynamic forward who can win games off off his own boot. Has gained senior experience at Norwood alongside teammate Dylan Stephens, making a real impression with 11 goals over three games – including a bag of five. Is the kind of player who can drift in and out of games, but has enough star power to suggest he’ll make a real difference for South Australia inside 50.

The 2018 Under-16 Division 1 Most Valuable Player (MVP )is rightly one of the leading bottom-age prospects around the country, and has broken into the Centrals Reserves side. Durdin is an absolute ball magnet, consistently winning over 20 disposals at Under 18 level and snaring his fair share of clearances. Also has the capacity to break forward and deliver inside 50 on top of finding goals himself, so may even spend time up forward given his 173cm/70kg frame.

The bottom-age midfield prospect who is right behind Durdin in terms of exploits, Edwards will be watched closely by Crows fans as a possible 2020 father-son. Is one who can provide some inside grunt to the SA midfield, with the added ability to move forward and find the goals. Does all the dirty work in terms of tackling and winning the hard ball, so should be an important part of the squad.

A zippy type who was ironically a standout for Western Australia  in last year’s Under-16 carnival. Has since relocated to South Australia and is yet another father-son prospect in this squad, tied to Port Adelaide as the son of 2004 Premiership player, Jarrad. Expect him to show flashes on the outside and forward of centre should he get the opportunity.

A mobile ruck who already has the size to compete with bigger bodies. Is terrific overhead and can also make an impact at either end, making him a dynamic prospect for his position. Finds the ball well as somewhat of a fourth midfielder and will cover a heap of ground. Also has a good athletic base having topped West Adelaide’s 2km time trial in the pre-season.

This year looks to be another fruitful year for the reigning champions, bolstered by a number of top-end talent. The likes of Dylan Stephens and Jackson Mead should get the chance to shine through midfield after already proving their outside capabilities, while dynamic forward types like Cameron Taheny and Josh Morris should provide a wealth of goals. Add Kysiah Pickett to that mix and you have some serious X-factor, with Will Gould and Will Day the most likely to impact down back. Bottom-age stocks should also prop up their leading top-age talent through midfield, completing a formidable unit. The advantage of some in experiencing senior SANFL football should also put them in good stead, adding to their obvious amount of class and damaging ball users.