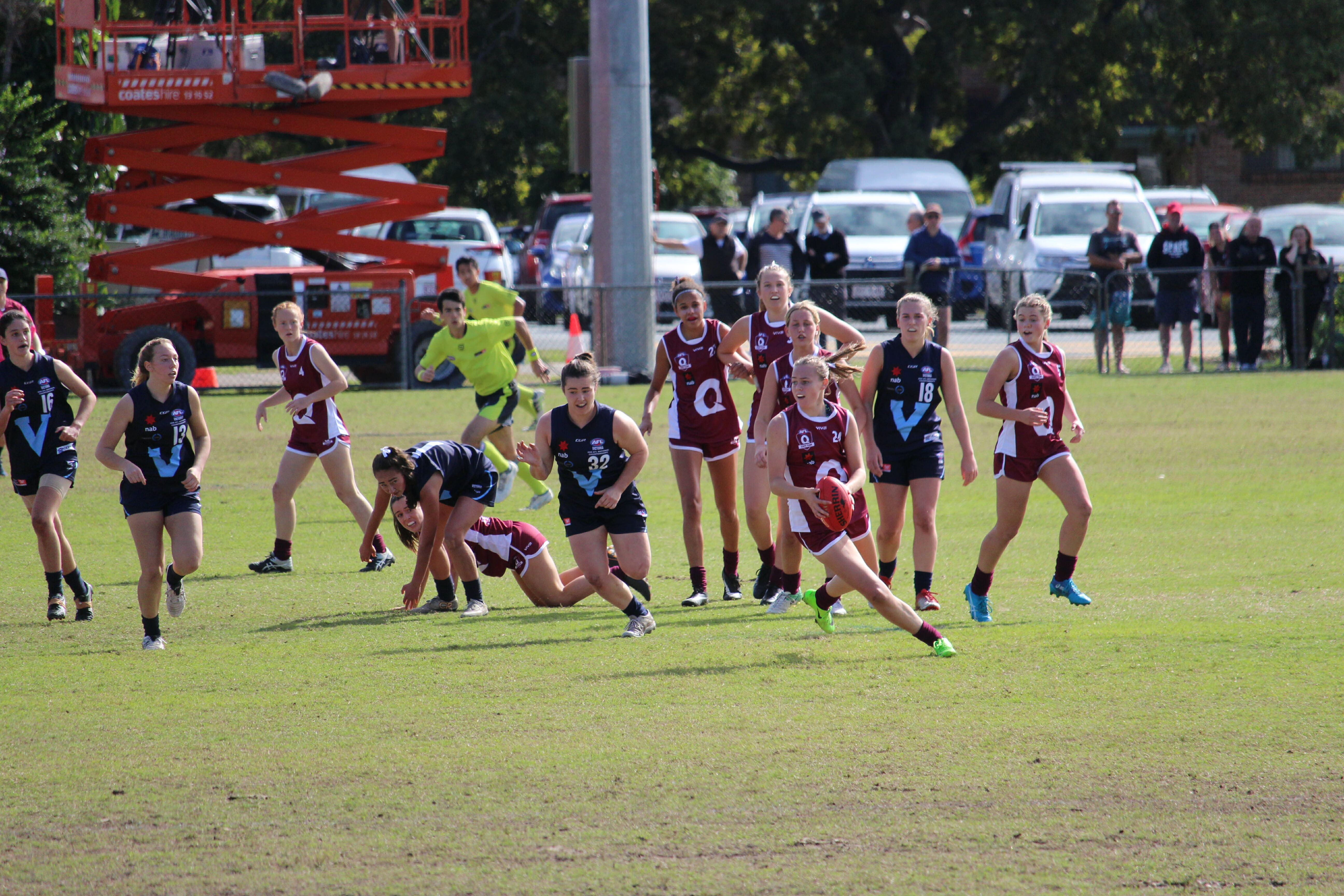 AHEAD of the two big clashes between Queensland and Western Australia for the AFL Women’s Under 18 Championships, we take a look at Queensland and how they are shaping up this year after an impressive effort at last year’s carnival. Below we take a look at some of the key players to watch – remarkably all of the below are AFL Women’s Academy members.

Still 12 months away from being eligible for drafting, Bradfield is a 172cm prospect in the AFL Women’s Academy, and another player from the highly successful Bond University team. Has overcome a long-term injury to return and will no doubt be a key player for the home side. She could well play up forward and be the tall target her teammates look to inside 50.

A member of the All-Australian side as a middle-ager last year, Dawes is a small forward who provides plenty of excitement inside 50 and can drift through the midfield to have an impact. She is a versatile mover and has X-factor galore, helping her get amongst the goal kickers. Dawes became a premiership player for Wilston Grange last year, matching it against bigger-bodied opponents. A fierce tackler as well, not allowing her opponents time and space.

One of three Gold Coast SUNS pre-listed players in the Queensland team, Farrar showed some exciting bursts off half-back before injuring herself early in the second game on the Gold Coast. She takes the game on, backs herself and can slice up the opposition with her offensive run. Likewise her defensive pressure and tackling ability is also something to watch, with her clean hands and strength to either apply or shrug off tackles another noticeable trait.

Despite turning 16 a couple of months earlier, Farquharson showed much promise last year at the AFLW Under 18 Championships as a bottom-ager. She played as a key forward, leading out and clunking grabs. For a taller player, Farquharson moves well and uses the ball well, and while consistency is what she will be looking for as she develops, she is genuinely a star when up and going and still has time to develop.

Another pre-listed player by the Gold Coast SUNS ahead of the 2020 season, Hammans played from defence to midfield and showed great strength and clean hands across the ground. She snuck forward at times as well and showed off her versatility, foot skills and vision, while her composure under pressure was also impressive and it was no surprise to see her pre-listed by the SUNS.

The third pre-listed Gold Coast SUNS player is the agile Hampson whose side-step became a trademark of the carnival last year. Not too dissimilar to Calder Cannons’ Georgia Patrikios, Hampson is able to evade opponents with ease and just steps through traffic like she is in uncontested areas of the ground. Hampson also has a long, penetrating kick that helps her hurt opposition teams and like the other two, it is no surprise to see Gold Coast keen to secure her on their list.

A consistent player last year, Heslop featured among the best on most occasions at the carnival and showed a high work ethic throughout the games. Heslop moved the ball quickly and well by hand or foot and played her role well for her side. While others won plenty of the ball, Heslop played a key role in the side and did not waste too many opportunities, showing off her class inside 50 when given the opportunity.

The standout player at last year’s carnival across series two, Postlethwaite is an exciting small midfielder who has nice skills and a hard-edge to also apply plenty of defensive pressure to her opponents. She has a penetrating kick and a great technical action, and sets up her teammates with scoring opportunities going forward. Named in the All-Australian side as a middle-ager last season, and it was no shock to anyone here that she was named captain of the Queensland side for the championships.

A reliable defender, Watson is a member of the Gold Coast SUNS Academy and was named in the back pocket of the All-Australian side last year. She is more of a rebounding defender who excites with her run and carry ability out of the defensive 50. She is calm and composed with ball in hand and has strong hands despite not being the biggest bodied player.

Made headlines from a young age by becoming the first female to play 100 games at her local club, Wynnum Vikings. White made the All-Australian squad as a bottom ager back in 2017, showing off her talent then. She followed that up with the Queensland Women’s AFL Rookie of the Year award and Harry Gordon Medal, for her high work ethic and natural leadership ability.