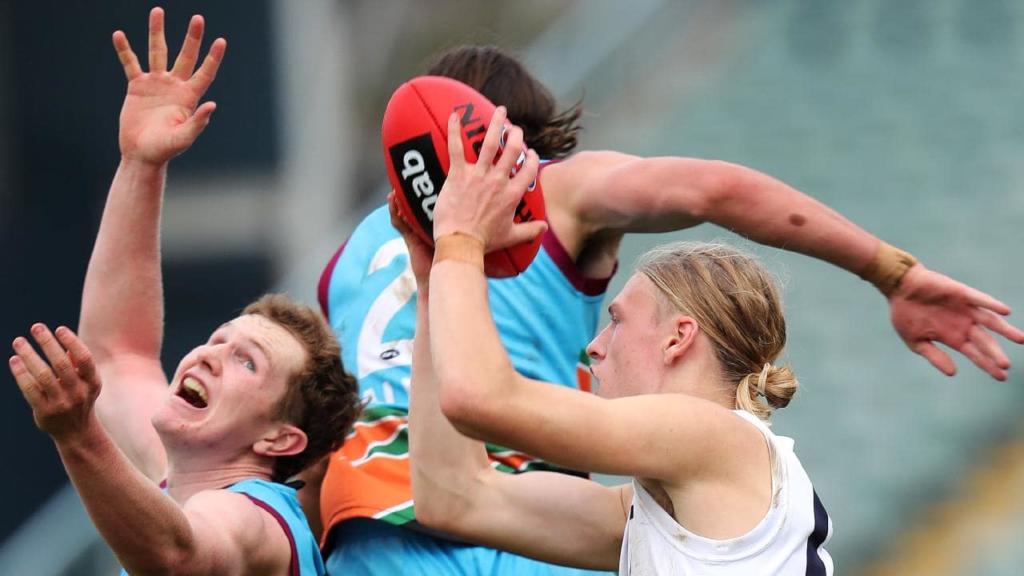 VIC Country continued its ominous start to the AFL Under 18 National Championships, backing up its Victorian derby win with a 18.8 (116) to 2.7 (19) trouncing of the Allies. Below were the standout players from either side.

Budarick started the game in defence, providing good run and loved to attack using his dash. He had a great bit of play in the second quarter intercepting at speed and kicking well on his opposite foot. Budarick was later moved into the midfield where he looked to have more impact, winning more of the ball and providing speed and toughness at stoppages. He showed his usual defensive capabilities with a great chase on Country speedster Brady Rowles, as well as his attacking game with a good burst away and dash on the wing. Budarick finished the game with 15 disposals and five tackles.

O’Neill was the standout player for the Allies with his run and creativity on the wing a real feature. O’Neill started the game quietly but really got going in the second half, starting the third quarter in great fashion – involved in a chain from half-back, winning three possessions with the final one a nice long kick inside 50. O’Neill also showed his courage in the last quarter sitting in the hole in defence and getting crunched from behind where he would win the free kick. The Tasmanian was fantastic on the wing with his composure, run and ball use, finishing the game with a team-high 26 disposals and eight marks.

Martyn was a busy player through the midfield winning the hard ball but also working hard on transition to either take marks or be a part of a chain of handballs through the middle. He showed good composure with ball in hand and had a good bit of play in the first quarter, showing his nice movement under pressure. He had a chance to hit the scoreboard but wouldn’t quite make the distance with a set shot at goal. Martyn finished the game with 16 disposals and five clearances.

Green was a real force at the stoppages, winning the ball at will. He attacked the ball at stoppages and was very clean getting his arms up quickly to ride the tackle and get a handball out, he had a great chain in the second quarter, winning a clearance and then getting the ball back in the handball chain and released a good long handball and this really showed his work rate in being able to continue attacking after winning a clearance. Green didn’t get a lot of the ball but played a lone hand as the Allies’ only big bodied inside midfielder. Green finished the game with 18 disposals and nine clearances, showing his dominance at stoppages.

Delahunty had a rough time as the Allies’ number one target up forward especially with the poor supply, but he worked into the game and still did some nice things – including a nice contested mark in the second quarter that would only lead to a behind. Delahunty looked at his best in the last quarter going for a nice run and showing his power, but would miss an opposite foot snap at goal on the run – although he would later set up a goal for his team with a nice handpass to teammate Noah Cumberland. Delahunty was moved to defence late in the game where he might find himself more often for the rest of the championships.

The Country co-skipper started on fire for the second week running, beginning at the centre bounces before moving forward. He was involved early around the contest and had a long set shot on goal that resulted in a goal to Weightman. When set inside 50, he took a brilliant one on one contested mark, before turning and kicking an excellent long range goal. He was involved again shortly after, taking an intercept mark inside 50 and making the Allies pay. He was clean around the ground and defensively relevant without the ball, highlighted by a holding the ball free kick in the defensive 50 which was uncharacteristically turned over on exit. Took a heavy head knock in a marking contest against Nick Murray in the last, which earned a 50 metre penalty and he converted a third goal. It was another productive outing, finishing with 22 disposals on top of the three goals.

After producing moments of brilliance against Metro at the MCG last week, his effort against the Allies was far more complete, ending the day as one of the most influential on the field. The performance started with a quality snapped finish in the first term and he continued winning the footy by presenting high on the lead, which included a spectacular diving effort. He earned a free kick in the second quarter which he converted, before finishing the day with two in the fourth quarter for a nice haul of four goals. Despite lacking some stature, his hands and exciting leap make him such a dangerous prospect aerially.

The inside midfielder has always been a ball magnet for Gippsland Power and he took his prolific ways to Tasmania on Sunday to be one of Vic Country’s best. He didn’t start at the opening centre bounces, but pushed up to the contest to lay a heavy tackle on Tom Green early. Once at the stoppages his hands were sharp and effective, but it was on the outside where he was consistently able to find space and provide an option on transition with an incredible 13 marks. What he lacks in acceleration, he makes up for with smarts and often buys himself time with evasive tricks. Baldi was the equal leading ball winner on the day, gathering 29 disposals.

Spent a majority of his time forward like last week and while he didn’t win huge numbers, Martin was good enough to take advantage of Vic Country’s dominance and hit the scoreboard. He has a real touch of class and doesn’t need the big disposal tallies, starting with a lovely set shot in the second term. His best moment came when he gathered a ball inside 50, spun in a tackle and dribble kicked a skilful goal. Another converted set shot saw him kick a third goal, a solid outing in anyone’s language.

With his co-captain Serong, Ash set the tone for a big day in the first term by collecting 12 disposals up to the first break. He basically did as he pleased behind the ball, intercepting, rebounding and the scoreboard soon offered flexibility for him to take on risky but demanding kicks to advantage. He had some smart defensive moments too, spoiling a one on one contest while out of position, before winning the ground ball and earning a free kick. He just took the game on whenever the opportunity presented and while he got a little cute on occasions, the good well and truly outweighed any turnovers. He finished with 29 class disposals to be in the best on ground discussions.

Many expected to see Kemp play as a big bodied midfielder during this competition, but with Vic Country lacking tall defensive options, the Geelong Grammar scholar has played defensive 50 in a position that is very familiar. He complemented Ash and Young perfectly, holding his position when required, but coming off his man and impacting the aerial contest when the opportunity presented. While he occasionally used a fist, by the end of the day he was reading the play so well that he was in position to take nearly every mark in his area. His hands and skills were good and he’d also take the game on when space opened up ahead.

Young wasn’t as prominent as against Metro the week before, but the intercepting half back was still very, very good. He got going in the second term with multiple intercept moments, highlighted by a one on one contest against the much bigger Conroy where he used his body to perfection to win the ball and begin an end to end chain that resulted in a goal. He flies for his marks and takes on his kicks, making him arguably the best offensive weapon in this year’s draft despite playing behind the footy.

I feel the Bendigo wingman is flying under the radar from a draft perspective. While he doesn’t win mountains of the ball, he is a metres gained footballer who has an electric turn of speed. He is a nice size at 188cm and capable of quickly getting the ball in dangerous positions. He had multiple carrying efforts against the Allies, the best coming in the second term when bouncing out of D50 at top speed to hit a target lace out up the ground. He is good overhead too, taking a strong one on one contested mark in the first term. He could tidy up his decision making on occasions, but I feel the attributes are there to create genuine interest.

The Rays’ utility did not get an opportunity to play on the MCG last week, but made the most of his chance in Tasmania with a strong performance on the wing. He looked calm and composed whenever the footy got in his hands, as shown when he converted a lovely set shot in the second term. Most of his footy was won on the outside, but he is certainly capable at the contest, especially aerially. He is one you always have to check twice on the team sheet, as he looks and plays taller than his 182cm, 76kg frame suggests. Williams finished the game as one of the highest ball winners with 20 possessions and looks to have cemented a spot in the side.