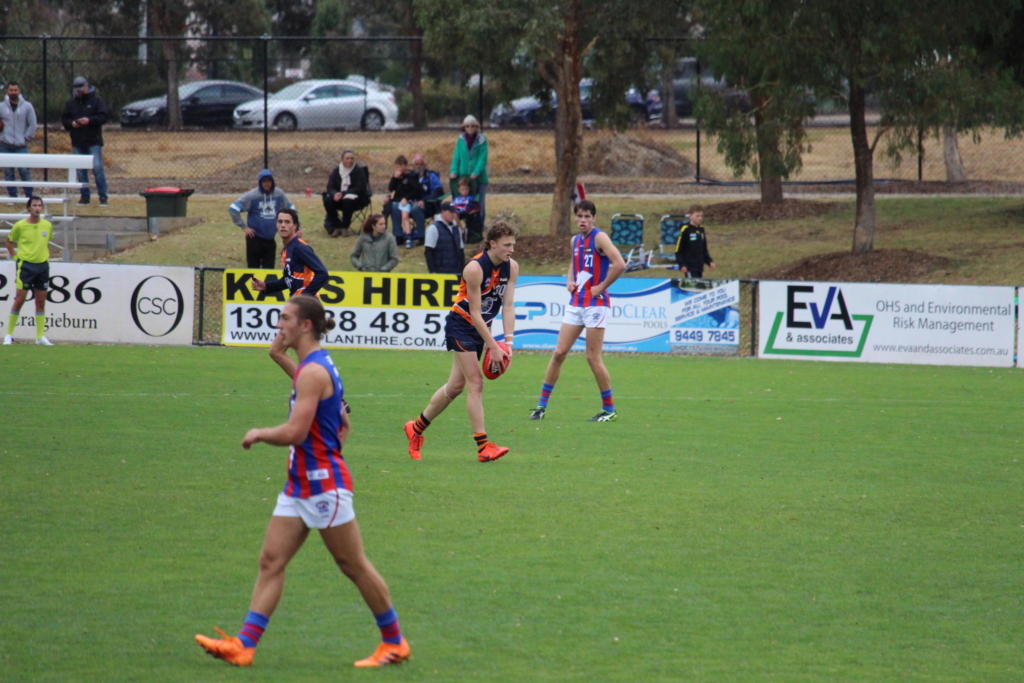 PLENTY happened in Round 10 of the NAB League Boys competition, with a new league-leader romping to a 100+ point win, while a final-minute thriller saw Sandringham claw onto second. Meanwhile, the likes of Oakleigh and Western are eying off a top four spot on the back of big wins. All that, and more in this week’s wash-up.

The Northern Knights took it to the Dandenong Stingrays this weekend with a 67-point thrashing at Shepley Oval, ending the reigning premiers’ undefeated start to the season. The match opened in the Knights’ favour, as they closed out the first quarter 29 to 7. Dandenong bounced back in the second, bringing the margin down to 12 heading into the main break. Despite the fight-back, the game was still very much Northern’s. The Knights went on to keep the Stingrays goalless in the third, adding four of their own. Dandenong managed one in the final term, but again, the Knights added four more, closing out the game 108 to 41. Key forward, Ben Major, was immense for the Knights with three goals from four disposals. Josh D’Intinosante also kicked multiple goals with two to accompany his 14 disposals, three marks and nine tackles, alongside Sam Philp who kicked two with 19 disposals and six tackles. Adam Carafa (24 disposals, five marks and four tackles) maintained his dominance through the centre, while Ewan Macpherson (21 disposals, three marks and five tackles) proved a pillar down back. For Dandenong, Ashton Williamson was the only multiple goal-scorer, kicking two with 15 disposals, four marks and two tackles. Jack Toner (18 disposals, five marks, five tackles and four rebounds), Corey Ellison (18 disposals, four marks and three tackles) and Jai Nanscawen (16 disposals and three tackles) all shared plenty of the pill and fought hard in the loss. Blake Kuipers also stood strong in the ruck with 24 hit-outs. After copping two consecutive losses, a win against the top side bodes well for the Northern Knights. Dandenong will look to bounce back against the bottom of the table, Murray Bushrangers, as they take them on next fortnight at home. Northern will face the Tasmania Devils across Bass Strait at the Kingston Twin Ovals in Round 11 in a hit-out for eight spot.

A game of two halves told the story as Sandringham Dragons ran over the top of the Geelong Falcons to edge them in a two-point thriller at Mars Stadium. The Falcons looked poised to set up just their second win of the year with a six goal to one opening half and control of general play. The Dragons remained a chance, though, with a dismal 1.7 in the first half meaning they still had only one less scoring shot despite the 25-point gap. Surer kicking in the third term meant they remained in the hunt heading into the last turn at 19 points down, but it looked as if the Dragons would be their own worst enemy as they missed a series of gettable chances early in the fourth quarter. Their 3.10 proved just enough though, with bottom-agers Archie Perkins and Jake Bowey putting the two winning points on the board in the final minute of the game. Despite coming up clutch with their scores, 23rd man Perkins and Bowey were a couple of the main culprits for inaccuracy in front of goal with 0.5 and 0.3 respectively, but both were amongst Sandringham’s best. Further afield, Angus Hanrahan and William Mackay were the Dragons’ leading ball winners, with Jackson Voss also influential through the middle and Jai Florent dangerous forward of centre. For Geelong, the dynamic forward pairing of Oliver Henry (2.1) and Charlie Sprague (3.1) combined for over half of their score, while Charlie Harris was their leading ball winner with some good work around the stoppages. Lachlan Smith was named the Falcons’ best for some exciting plays in the forward half, with bottom-ager Gennaro Bove also lively through the middle and Cameron Fleeton taking on responsibility in defensive 50. A second loss by under a goal sees Geelong remain the lowest-ranked Victorian side, and a meeting with Bendigo is next on the agenda. For second place Sandringham, another top-four clash against Eastern awaits in Round 11 – a chance to redeem its Round 7 loss to the Ranges.

The effects of Vic Country duties caught up with Gippsland Power for a second week running, as the Western Jets soared to an 18-point victory in Morwell. The visitors started strongest and never looked back, with a six goal to two opening half proving more than a definitive margin for the match. The Power hit back with a four-goal surge in the third quarter to set up a tense finish, heading into the final break just 10 points down. A comeback win was not to be though as Western held on for its sixth win of the season. Jonah Horo was named best for the winners for his all-round performance, with Lucas Rocci again their leading ball winner and the inclusion of tall pair Emerson Jeka and Will Kennedy proving more than handy. Josh Kellett joined Rocci as a key influencer in the back half, while bottom-ager Eddie Ford was lively up the other end. For Gippsland, Harvey Neocleous was named best as he booted over half of his side’s goals (four of seven), while Jake van der Plight and Leo Connolly won a heap of ball to join him as goal kickers to also be named among the best. With his brother, Riley staking his claim in Country colours, Trent Baldi was another to win his fair share of possessions in the loss. The third consecutive Jets win puts them level on points with fourth place Gippsland, and a meeting with 2-7 GWV awaits. Meanwhile, a third straight loss in Round 11 could see the Power relinquish their top four spot, as opponents Oakleigh join Western in the hunt for it.

New ladder-leaders Eastern Ranges consigned the Greater Western Victoria Rebels to the season’s first goalless score, trouncing them by 111 points at Mars Stadium. The Ranges piled on six goals in the second and fourth quarters while also keeping the home side scoreless in both to set up the big win, with the percentage boost putting them top of the NAB League ladder. While both sides had some key outs coming into the game on the back of Under 18 championship duties, Eastern simply had too much remaining firepower across the board. Jordan Jaworski was the main beneficiary, booting 7.1 in a break-out game for him, while Metro representative Connor Downie put his hand up for re-selection on the back of three goals, and fellow squad member Jamieson Rossiter matched his tally to return to the side with a bang. Zak Pretty again won a mountain of ball to lead the possession stakes, with Tyler Edwards and Wil Parker not far behind to also be named among Eastern’s best. On a tough day for the Rebels, bottom-ager Jack Tillig stood up with 31 disposals as his side’s best, while fellow ’02 birth Fraser Marris was the next best alongside Round 9 player of the week nominee, Riley Polkinghorne. The Rebels will have to wait a week until they can redeem their performance, with a tough encounter against Western up next, while Eastern has the chance to go 2-0 against fellow top four hopefuls, Sandringham in what will be a top of the table clash in Round 11.

Oakleigh continues its charge up the ladder an into form, accounting for the Calder Cannons by 69 points in the sides’ second meeting at RAMS Arena for 2019. While they won ugly in Rounds 6 and 8, the sixth place Chargers are now on par with the top four sides after wins by a combined 126 points in Rounds 9 and 10. While a 26-point half time buffer was more than handy, Oakleigh well and truly pulled away in the second half with nine goals to two in a more typical Chargers display. The inclusion of bottom-age stars Jamarra Ugle-Hagan and Will Phillips on the back of school football breaks proved telling, with the former booting five goals and the latter leading the possession count. Fellow bottom-agers Lochlan Jenkins and Fraser Elliot were not far behind Phillips in those stakes to continue their good form, while GWS Academy member Jeromy Lucas played a good hand with two goals. For the Cannons, who had previously won four of their last five, Ben Overman was named best, with Ned Gentile again among the votes alongside the likes of Jeremy O’Sullivan (two goals) and Sam Ramsay. Unable to rectify their Round 2 loss to the Chargers on the same ground, the Cannons now slip below their weekend opponents to seventh with a bye on the horizon. Meanwhile, Oakleigh will look to continue its hot form and break into the top four with a win against Gippsland in Round 11.

The Murray Bushrangers put a down fortnight behind them to claim their third win of the season, comfortably beating the Tasmania Devils by 38 points at UTAS Stadium. The game acted as a curtain raiser for the fixture that has seen much of the core of both sides stripped, with the Allies doing battle with Vic Country shortly after. Murray adjusted much better after a week without a raft of its stars, storming out of the blocks with a seven goal to one opening half. While the Devils tightened the screws to win the remaining two quarters by four points, the damage was already done and Murray cruised home to what may well be a breakthrough victory. Dylan Clarke was named best for the winners, with the likes of Cameron Wilson and Ben Kelly others the find the goals and also be named among the best. Kelly’s fellow over-ager Zane Barzen chimed in with two goals, joined by Ryley Bouker as the game’s only multiple goal kickers. While Tasmania’s Jackson Callow (0.4) did not find the goals, he was effective throughout, with ball winners Oliver Burrows-Cheng, Patrick Walker, and Will Peppin also thereabouts on a tough day for the home side. The Devils will look to bounce back in a consecutive home game against the Knights in Round 11, while Murray faces a tough ask in backing up against Dandenong after its first loss for the season.