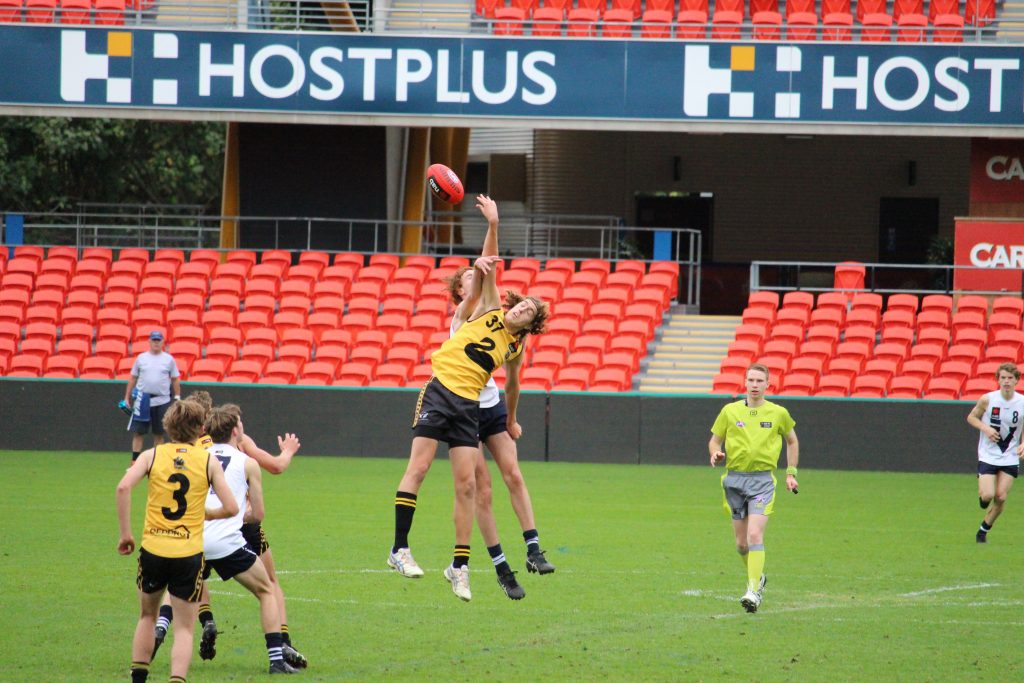 WESTERN Australia started its AFL U18 Championships campaign with a stirring 17-point victory over the highly-fancied Vic Metro at Lathlain Park. It is the first time since 2015 that the Sandgropers have secured victory over their Victorian counterparts.

Below were the best players from either side.

The WA Leadership group member produced a performance that highlighted his credentials as one of the best prospects from WA this year. Against the Big V, Garcia collected 21 possessions, won an equal team-high seven clearances, laid four tackles, recorded four inside 50s and took three marks to be one of the best players on the ground. His kicking skills in the wet conditions were elite for someone his age.

The WA Captain was inspirational for the Sandgropers, crashing his way through stoppages to win the ball for his team. He finished with a game-high 31 possessions, an equal team-high seven clearances, a team-high five rebound 50s, five marks, four inside 50s, and three tackles to be best afield. A highlight of his game was when he went back with the flight of the ball and took a courageous mark, before crashing into an opponent and team-mate.

The Fremantle Dockers NGA member was electrifying in the forward half for the Sandgropers, using his noted speed, dazzling agility and precise skills to provide an x-factor inside 50. He finished with 14 possessions, six tackles, four marks, four inside 50s and three goals in a dominant display. A highlight of his performance came in the second quarter, when he out-marked an opponent before playing on and drilling a goal from outside 50.

The 2018 AFL U18s All-Australian was dynamic on the wing for the Sandgropers, often using his pace and skill to carve up the defence of Vic Metro. He collected 20 possessions, took three marks and recorded two inside 50s to be one of the best players on the ground.

The electrifying forward showed why he is being labelled as a possible draft bolter, showing flashes of brilliance in the forward half. He finished with 13 possessions, three inside 50s, two marks, two tackles and two goals. The highlight of his game came in the fourth quarter, when he cleanly picked up the ball, darted around an opponent, shrugged off another opponent and snapped through a goal from about 50m out.

The key defender was exceptional in defence for the Sandgropers, winning many one-on-one contests, intercepting Vic Metro’s attacking forays and rebounding with class. The Swan Districts product finished with 10 possessions and six marks, while restricting Charlie Dean to just four possessions and a goal.

Stationed at centre half-back, Ruscoe proved why WA officials rate him highly, with a stunning performance playing primarily on Harrison Jones. Ruscoe finished with 18 possessions, seven marks, three tackles and three rebounding 50s in a pivotal performance for the Sandgropers.

The highly-touted ruckman produced a performance that indicated why he is considered to be a potential first-round pick. Up against Nick Bryan, Jackson gathered 12 possessions, won 35 hit-outs, won six clearances, laid three tackles, took two marks and recorded two inside 50s to stamp his authority on the game. His follow-up work around the ground has dramatically improved, making him an even more dangerous player.

A late addition to the WA U18s team, Bennell produced a performance that indicated he could be another bolter. The South Bunbury product finished with 11 possessions, five tackles, five inside 50s and a magnificent goal. Late in the second quarter, Vic Metro looked to rebound the ball out of defensive 50 via a number of handballs, but Bennell was able to steal it from them, weave his way past a couple of defenders and then drill through the goal from just inside 50.

The East Fremantle product was outstanding off the half-back line and through the midfield for the Sandgropers. Rivers gathered 22 possessions, took four marks, laid three tackles, recorded three rebound 50s and two inside 50s, and kicked a telling goal in the third quarter. His composure and skill-level when under duress is outstanding for someone his age.

The Oakleigh Chargers product showed why he is considered to be one of the best small rebounding defenders in this year’s draft pool. He finished with 17 possessions, six rebound 50s, four marks, four tackles, two inside 50s and a goal to be one of Vic Metro’s best. His run and carry, combined with his precise skills, make him a damaging player from the back half.

The much-fancied Rowell showed everyone why he is so highly touted. He gathered 24 possessions, won an equal game-high eight clearances, recorded six inside 50s, took four marks, laid four tackles and kicked a goal to be Victoria Metro’s best. His contested work around the stoppages was elite.

The Maribynong Park junior was outstanding in the midfield for the Big V, often putting his head over the ball to get it going forward. He accumulated an equal team-high 24 possessions, won an equal game-high eight clearances, took seven marks, recorded three inside 50s and three rebound 50s, and laid two tackles in a powerful performance.

Stationed on the half-back line, Butler was prominent for the visitors with 23 possessions, seven rebound 50s, and four marks in a classy and polished performance. In a tough outing for the Victorian defenders, Butler showed excellent composure under duress, intercepted a host of WA’s attacking forays and displayed his penetrating kicking skills.

The Victorian Captain tried to will his team through the middle with 16 possessions and seven clearances. His spread from the contest, work-rate, vision, decision-making and skill execution were all on display.

The Northern Knights player tried his heart out for Victoria with a solid performance in defence. He finished the game with 17 possessions, seven marks, five rebound 50s and two tackles. His defensive marking and spoiling were a feature of his game, as was his reading of the play.

Stationed a centre half-back, McAsey was rock solid in defence for the Vics, intercepting a host of WA’s attacking forays. He finished with 11 possessions, six tackles, four marks, and two rebound 50s to arguably be Victoria’s best defender.