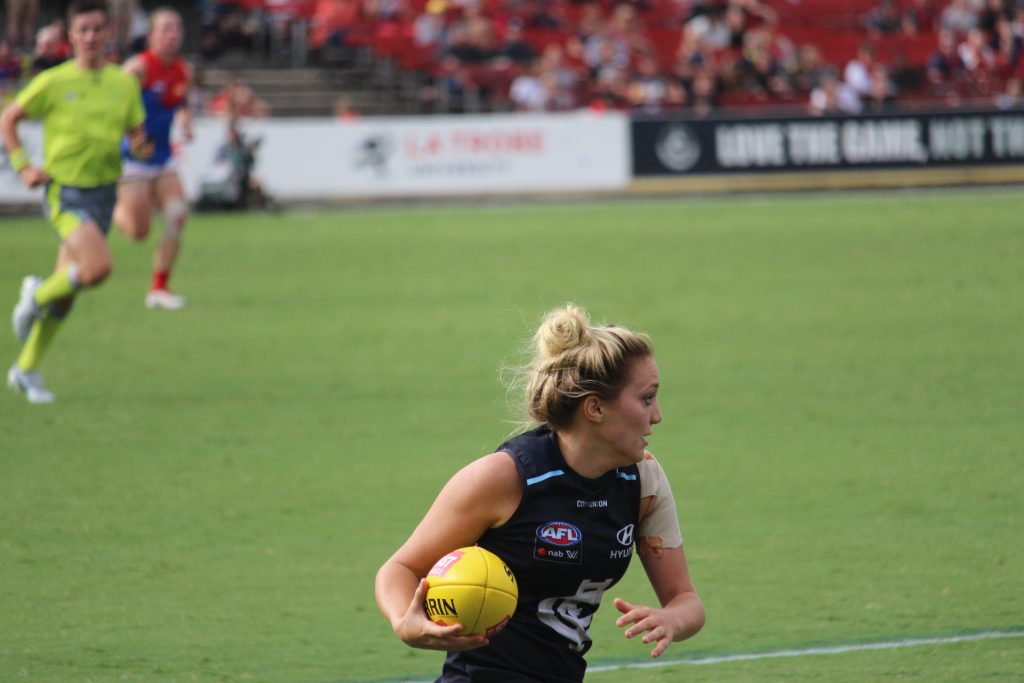 ROUND 5 of Victorian Football League (VFL) Women’s competition is up next, and after a massive ladder-changing round last week, sides will be firing on all cylinders to put themselves back up high on the ladder. From four rounds Collingwood and Melbourne Uni are leading most of the stats, making these two teams the ones to beat at this early stage. Three sides have byes this week, with Southern Saints, Essendon and Hawthorn sitting out over the long weekend.

Carlton will be hoping for an upset this round when they take on NT Thunder, who appeared to have limited structure across the field last round against Collingwood. That being said, the Blues are sitting toward the bottom of the ladder with no wins on the board, so will need a big team performance this week to run over the Thunder. Natalie Plane will hope for another big one after a solid performance across the board in the opening rounds, while Sarah and Jess Hosking will want to also back up their respective solid starts to the season. NT had a dominant start to the season with Chelsea Randall and Ebony Marinoff in their ranks, however have petered off after a bye in Round 3 and big loss last round to the Magpies. With only a handful of players who have taken the field for multiple games in a row, watch out for the likes of Angela Foley who can take the game on and dominate without warning.

This match will likely see Melbourne Uni prove far too good for the bottom side, with Uni being held to a loss last round but dominating the few rounds prior to be secure in the top half of the ladder. The Seagulls have not only been unable to get points on the board, but also struggled to contain sides as they enter the defensive 50, with their closest margin for the season being last round’s nine-point loss to Hawthorn. Uni are dominating the stats thanks to some dominant performers and solid form around the field, with Jasmine Garner sitting even in first for goals with eight on the board, while Kate Gillespie-Jones has been dynamic with an average of almost 25 touches per game (24.3), while also leading the tackle count with 36 from four rounds. Williamstown’s Mo Hope has put in the hard yards to try and rally her side into action to no avail, though small forward Sharnie Whiting has been promising in recent weeks.

Darebin may have had a week off with a bye last round, however will be lucky to come out of this matchup unscathed given the Bulldogs took top spot after a win over Geelong last week. Given the Dogs’ clinical ball use and skilled play around the grounds it will be a tough one for the Falcons, who have not necessarily struggled to get points on the board but have been unable to stop opposition sides from peppering the posts. The combination of Bonnie Toogood through the midfield and dominant ruck, Nicole McMahon will be difficult for the Falcs to stop, with Toogood leading the marking tally for the competition with 23 (averaging 7.7), while McMahon has averaged 32 hitouts per match. The Falcons have so far put up some good performances against the higher ranked sides and getting goals on the board, so will hope to continue in that vein against the Dogs and lift in form this week.

Richmond have had a strong start to the season thanks to some dominant performers week in and week out, with the likes of Katie Brennan able to take the game on while Tayla Stahl – though having missed eight behinds from three matches – has kicked eight goals to be even with Garner on the goalkicking leaderboard. Meanwhile, Alice Edmonds heads the hit-out tally with 99 for the season so far at an average of 33 per match. Geelong have had a number of strong performers, but haven’t been able to string consistency with only one win on the board. Amy McDonald and Jordan Ivey have been two of Geelong’s stronger performers, averaging 18 and 15 touches and five tackles respectively. Richmond will hope to follow on from their strong start to the season with another win on the board this week, with Geelong’s side likely unable to penetrate Richmond’s pressing defence and intensity moving the ball up the field.

This match will be a big test for Casey, who won their first three matches at the top of the ladder without a hitch but were seriously challenged last round, seeing them drop to fourth. The Magpies had a solid win last round over NT Thunder, keeping the side to only one goal as the Magpies kicked away for a dominant win. The likes of Jaimee Lambert will be the one to watch in this match, leading the disposal count from four rounds and averaging more than 25 touches per game as a dominant performer across the field. Casey’s midfield will need to fire on all cylinders to slow the Magpies’ movement, while the likes of Bianca Jacobsson will need to step up this round after a quiet week on the track. The Dees will also want to up the ante in the ruck, after losing out on possession through the midfield from the centre bounce. Look for a close contest between fourth and fifth on the ladder, with the Demons hoping to bounce back and regain a higher spot on the ladder, while the Pies will be looking to continue their good form.