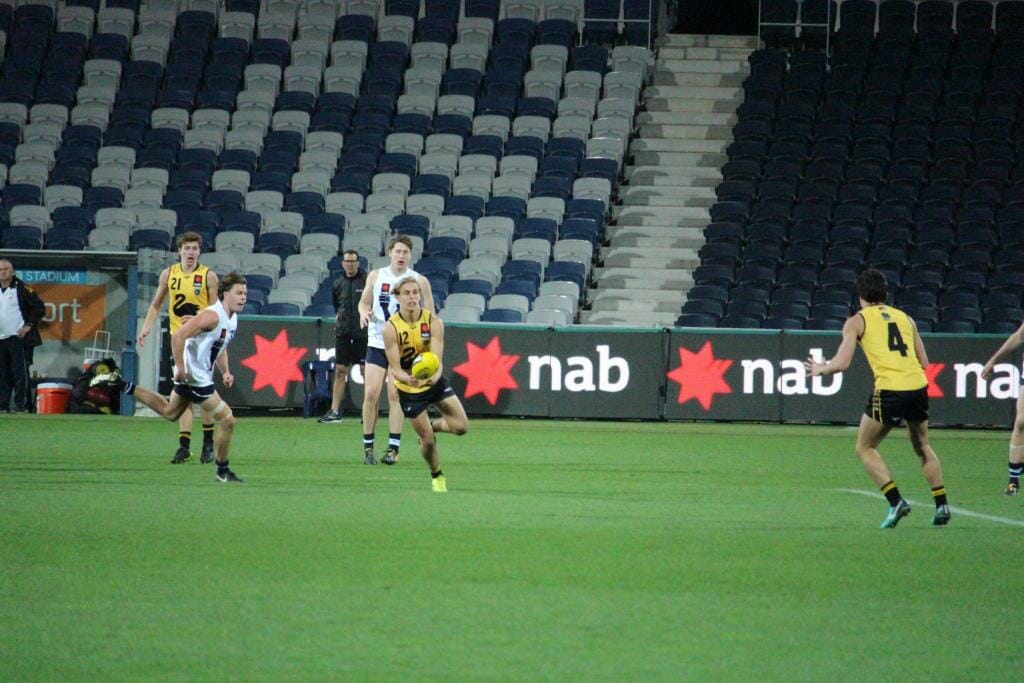 THE 2019 West Australian Under-18 representative side is stacked with exciting prospects, with plenty who will catch the eye and rise in stocks during the carnival. A crop of East Fremantle talents will be a key feature, with a balanced midfield, some damaging outside types, and a certain leading ruck prospect forming the base of the squad. With five players named in last year’s U16 All Australian side, there will no doubt be a handful of bottom-agers to make a mark, too.

Playing in defence, Buller held up well at last year’s championships and then went into the ruck to cause headaches for opposition sides, replacing Luke Jackson once he had basketball commitments. He reads the ball well in the air and can set up attacking plays, as well as take crucial one-on-one marks. He is a player who can drift forward and act as a leading target inside the forward 50. Wherever he plays over the next month, expect him to play a role and really nullify an opposition tall.

A highly talked up ruck prospect, Jackson and his counterpart this weekend, Nick Bryan are subscribed by many as the top two ruck prospects in the draft crop. Jackson is an athletic tall who has represented Australia at basketball, but has now chosen football and looms as a key in the West Australian side. He is a high-volume ruck who can win possessions around the ground, drift forward and have an impact, or drop back and take a crucial mark. His game against South Australia last year at the championships – 25 disposals, seven marks and a goal – was as impressive as any performance during the carnival.

Captain of East Fremantle, Rivers is potentially the leading draft candidate for Western Australia this year along with Jeremy Sharp and Luke Jackson. Rivers is an inside midfielder who can play off half-back, attacking the ball fiercely and handing it off to his running teammates, while also creating plays off half-back. He is a consistent performer and has shown that this season in 2019, constantly finding the ball and laying plenty of tackles. A leader on the inside or outside, Rivers is a player Western Australia can rely upon to get the job done.

Named captain of the West Australian side, Robertson is a crucial member of the inside midfield, and has been a natural-born leader throughout the journey. He attacks the contest with vigour and does not take a backwards step. One of a number of West Australians who were able to taste the atmosphere of the Under 18 Championships, averaging 14 disposals, seven tackles, two inside 50s and two marks. He is a huge ball winner at WAFL Colts level and will be a key midfielder in the state side.

Burst onto the scene at the championships, especially at Marvel Stadium, where Sharp looked a class above against the Allies, roaming from half-back to midfield alongside Jordan Clark. Sharp earned a spot in the 2018 Under-18 All Australian team for his performances, and has already been a member of the East Fremantle WAFL League side this season, holding his own against senior bodies. A good size at 187cm and 79kg, Sharp is a player that his teammates can rely upon with ball in hand.

The exciting outside midfielder has huge upside and is a player who could have a pretty handy highlights package at the championships. A member of the Fremantle Next Generation Academy, Henry is very light at just 62kg and 179cm, but is someone who is versatile, damaging and provides as much defensive pressure as offensive nous in the forward half. Henry has had a ripping start to the season, averaging 22 disposals, six marks and five tackles in the WAFL Colts competition already this year.

Another club captain who has made the state side, Pina is a clever defender who uses the ball well out of the back half, but can also be tasked with defensive roles to nullify dangerous opposing forwards. An overager, Pina missed out last year on being drafted, but his improvement in 2019 – averaging 22 disposals, five marks and seven tackles – including a 32-disposal game against West Perth in the opening round – has him on recruiters minds, so much so he was invited for an AFL Mid-Season Draft medical last month.

Prior is likely to be one of the more damaging prospects for Western Australia, and one who can set up plays coming out of defence. At 188cm and 79kg, Prior is a readymade defender who is able to not only intercept the ball, but has superb vision, skills and decision making. While other defenders are able to lock down, Prior is able to be creative in defence to hurt opposition zones.

Grainger-Barras is one who will sure up the Black Swans’ defence, bringing high level reading of the play and solid marking to the table. The Swans product is still quite slight at 77kg, and while he has shown his ability to play as a key defender, Grainger-Barras will likely provide lockdown roles on the back of his rounded defensive game and can get the ball moving forward.

The dynamic Perth forward grabbed attention with a stunning Under 16 national championships last year, including a six-goal haul against Vic Metro. Has not been selected to face them this weekend, but should get a crack with his mix of lead-up overhead marking and ground level work rate. Finds goals at will, which is a valuable commodity.

One of five selected bottom-agers to have made the Under 16 All-Australian team last year, O’Driscoll is a defender who finds plenty of the ball. Has only played two games for Perth in the Colts this year, but averages more than 25 disposals over the last two seasons. Also has the ability to intercept and push up the ground.

The solidly-built midfielder thrives in the contest and is a terrific ball winner. Averages 29 disposals for the Swan Districts at Colts level, including a season-high 40, and should add some grunt to the WA engine room. Is a good exponent of handballs out of traffic, and possesses rare vision which adds finesse to his aggression and tackling pressure.

The 2020 Fremantle NGA prospect is an exciting half-back with fantastic skills by foot and apt decision making. Marks well for his size but stands out most with his ability to rebound effectively and do so at pace – so expect him to catch the eye if he gets a chance.

The zippy Claremont small forward is coming into some form, having picked up a season-high 27 disposals in his latest Colts outing. Is another tied to the Fremantle NGA, and should provide some spark inside 50 for the Black Swans. Also possesses good goal sense, and is a menace to defenders.

The current crop of top-agers took out their Under-16 carnival two years ago, so should give it a good crack once again. It is always hard to get an early gauge on how the West Australians will fare, but we should get a better read of their talents in their upcoming meeting with the highly-fancied Vic Metro side. The likes of Luke Jackson in the ruck and Jeremy Sharp on the outside are some of the leading prospects in their positions, with Trent Rivers and Deven Robertson set to provide real grunt in the midfield. A strong defence will also be a feature, with dynamic tall prospects, good intercepters, and effective rebounders all at their disposal. Watch for some of their better bottom-agers to also make an impact across the carnival, with a couple tied to the Fremantle Next Generation Academy.