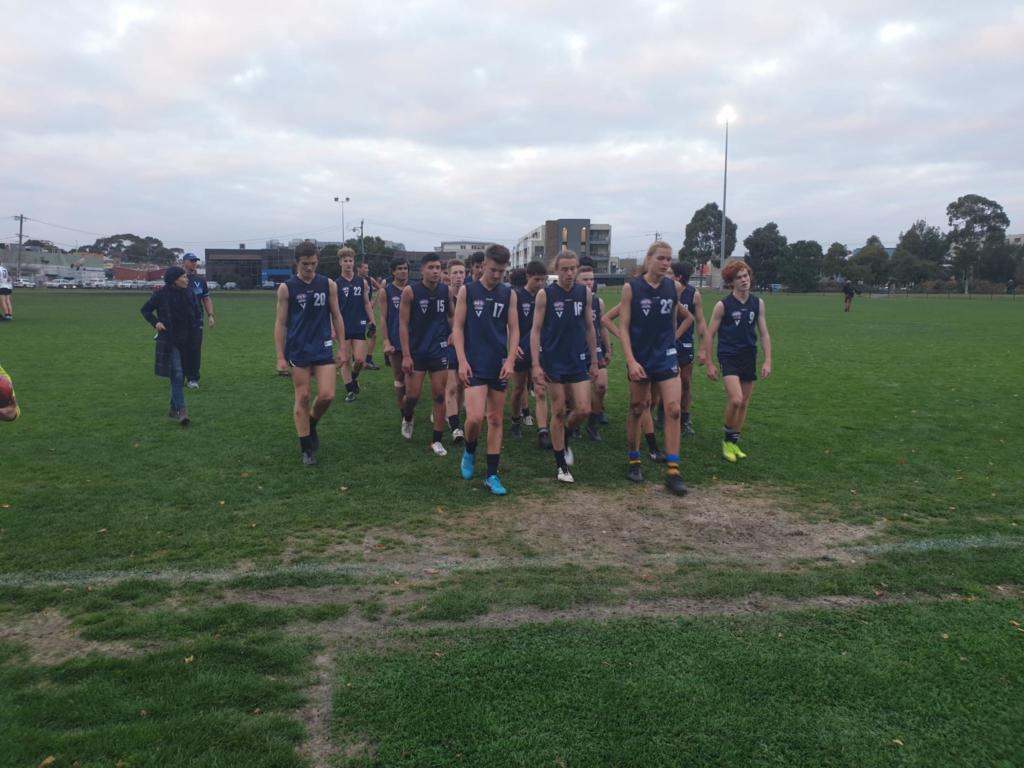 THE all-Victorian representative action continued on Saturday at Preston City Oval, with the Country and Metro sides battling it out in their final trial game before they meet again in Round 1 of the Under 16 National Championships on June 16. Metro won the day 12.7 (79) to 7.3 (45) and Michael Alvaro was on hand to cast an eye on the match, with notes on outstanding players from either side.

Hobbs was again one of the better players for Country with his bulldog-like approach in midfield. Starting slowly, Hobbs built into the game well with some neat contributions by foot as he began to accumulate, but really came into his own after a big overhead intercept grab in the second term. The Rebels product swept up quickly at ground level and provided good pressure when he wasn’t on the ball, with all of his 75kg frame felt in the contest. Hobbs kicked a nice set shot goal in the third term to add to a solid day at the stoppages, and should be an important inside cog in the Country engine room.

Gippsland’s Green started the game in ideal fashion, winning a holding the ball free kick and converting the resultant set shot for the first goal of the game. His impact would then shift to the contested ball with a move into the middle, with Green showing his strength to stand up in tackles and fight his way out of them. Looks a definite inside sort despite not having the biggest build, and seems to attract the ball at the coalface – flicking out handballs to his runners.

The Country skipper oozes class and x-factor, making an impact in both the midfield and forward 50. Rachele is clean and agile at the stoppages, and was seen continually weaving his way through traffic to find space and drive his side forward. The Murray excitement machine has great footy smarts, and showed it with clever positioning around the arc to intercept and find shots on goal. A set shot from one of those marks fell short, but Rachele followed up to win the ball back and snap an important goal on the half time siren. He was a little quieter in the second half but has great star power and is dangerous wherever he plays. Will likely start forward and be a wildcard for Country through the midfield when they need a spark. Does not mind a bit of niggle either.

Much will be made of how similarly he plays to his brother, Darcy, but Indy looks primed to make his own impact. Parish rotated between the midfield and flanks at both ends, winning a decent amount of ball and finding the goals with a middle-splitting set shot in the third term. He looked most lively when breaking forward, with a neat kick to Josh Rentsch inside 50 at full speed catching the eye. Is already a good size and was hardly tackled at this level, while also making his presence felt with some heavy pressure around the ball. Another solid outing, and looks a classy prospect to watch.

Davies was a solid target at centre half-forward, leading up and attacking the ball hard at full flight. He found the ball at ground level early and wheeled around to deliver inside 50, but was most damaging as the game wore on with his physicality inside 50. Attracted a holding free kick deep inside the arc which he converted in the second term, and missed another set shot chance in the fourth quarter. Davies is already a good size at 197cm and 92kg, and it showed as he outmuscled his opponent for a clutch one-on-one overhead mark in the middle of the ground late on. Also spent some time in the ruck, and could rip some games apart on the back of his sheer size at this age. Could form a formidable tall pairing with Stingrays teammate Patrick Gerdan in the years to come.

Another who already boasts a solid frame, Rentsch formed a dangerous forward partnership with Justin Davies – particularly in the first half. Made an ideal start as he converted a free kick inside 50, and has a fluent kicking action. Showed more of the same in the second term with a strong mark on the lead and second set shot conversion, and looks to have natural forward capabilities. Also showed a bit on the move when he evaded a couple of opponents, but was eventually caught holding the ball as he bit off a little too much. Faded out of the game as it wore on, but otherwise showed good signs.

Dib stood out even before the first bounce with some of the best hair you are likely to see. It did not take long for the Chargers product to prove that his talents extended further than just his locks, with some lively play forward of centre and in the midfield. Dib provided excitement from the off with explosive forward running and delivery inside forward 50, but ended up moving into the centre bounces and having an impact there with his clearance game. Dib had three big bursts from stoppages in the third term which really caught the eye, and he attracted the ball well inside. A lot of his possessions in the second half were contested and it showed with far less efficiency by foot, even in front of goal – which are areas he may have to sharpen if he is to spend more time forward as a small.

Another lively small midfielder/forward, Taylor is a zippy ball winner who excels when the ball drops to ground level. He used his pace well to burst away with a couple of clearances in the first term, finding Scott Beilby inside 50 to finish off one of them. Taylor’s distribution by hand was neat and efficient, often dishing to teammates on the run to create shots on goal. Taylor was thrust into the forward line in the second half to good effect, converting two set shots in the final quarter to cap off a good day. Both finishes were clinical from tight angles, with one coming after a terrific one-handed mark going back with the flight. Lots of promise.

Jacobsen was initially sighted in the back half as he looked to provide some run and carry out of defence. The Western Jet put in repeat efforts to follow up his kicks from deep and receive a second disposal, moving quickly up the field while also showing an aptitude for keeping his hands up in the clinches. Looked a solid mover across half-back but was moved into the midfield later on where he was a touch quieter. Jacobsen still had another nice disposal chain as he followed up a kick to deliver inside 50, and he was one of the more effective users by foot.

Jacobsen’s Jets’ teammate really came to life late on with some silky movement out of defence after being relatively quiet beforehand. Curtis looked clean at ground level and was smooth across the turf, but also provided a couple of surprisingly hard tackles despite his slight figure. His rebound was effective despite a couple of shaky kicks, and he did well to find a good amount of ball. Has also played forward, so could be a handy versatile wildcard for Metro.

Rankin is another clean outside user, and he spend most of his time off half-back before shifting onto the wing. While playing in defence, Rankin was entrusted with kick-in duties and looked an effective designated user by foot. Standing at 181cm, Rankin was also deceptively strong overhead, leaping well for an eye-catching mark in the first term, while intercepting for another in the third. The Oakleigh Charger ended up accumulating at a good rate on the wing, driving forward well to enter the attacking 50 and flicking off a clever handball to Brock Jacobsen to hand him a shot on goal.

Newitt was one who drifted in and out of the game, but absolutely knew when he was around the ball. The Cannons product is a terrific judge of the ball in flight, and showed as much with a well timed mark as the ball came over his shoulder in the second term, finishing it off with a set shot goal. While he spent time forward early, Newitt would eventually make his mark down back with outstanding aerial intercept marking. His hands are just sticky, and it proved more than handy as he flew for repeated pack marks inside defensive 50 in the final term and managed to hold on. Stands out in his flashy blue boots, and proved effective at either end.

The Knights and Metro forward has a handy knack of finding the goals, and he did so on a game-high four occasions. Rossimel booted three of his four during the first half; the first came off the back of a contested mark leading out, the second was another set shot conversion, and the third was an opportunistic snap out of nothing. He looks a real dynamic forward type at 188cm, able to mark well and become dangerous at ground level with good natural instincts. Rossimel would go on to add another major in the final term after somewhat drifting out of the game, and he flew for a couple of athletic marks late in the piece while missing the chance to finish with a bag of five. One to watch.