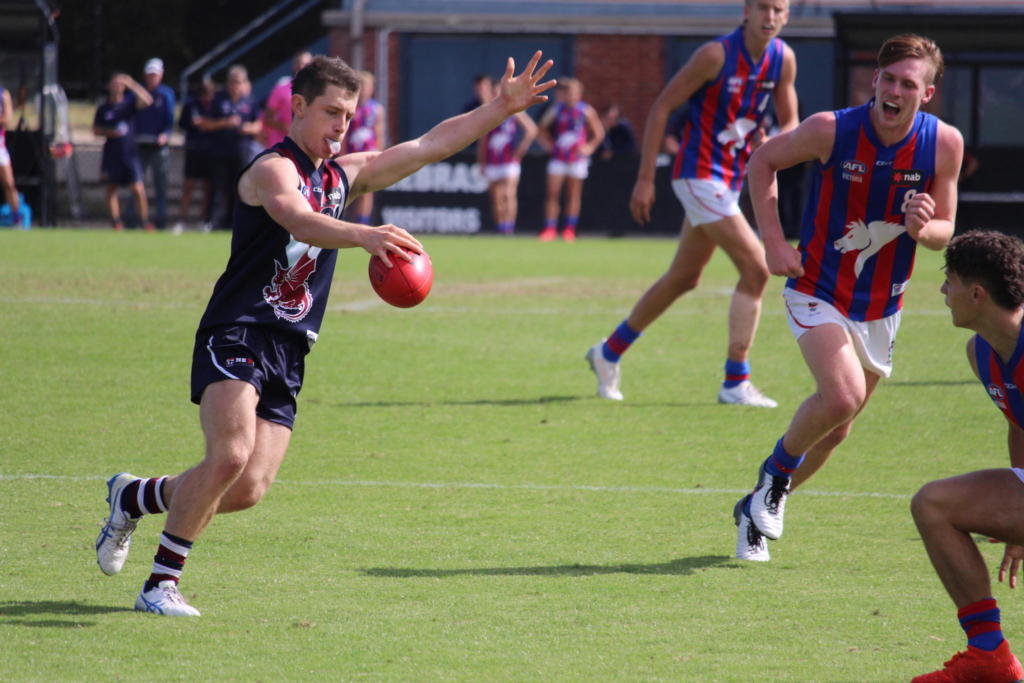 ROUND 9 NAB League results see each top four side sit pretty on six wins as ladder-leaders Dandenong had the week off, with Sandringham getting the better of Gippsland and Eastern getting up convincingly against Geelong. Despite missing around half of its best 22 to Vic Metro commitments, Oakleigh was another big winner – solidifying a top eight spot with the largest margin of the weekend.

Blustery conditions made for a scrappy affair at MARS Stadium on Saturday morning, with the Devils running out eventual victors by 32 points. With inaccuracy being the headline of the day, it was the Devils’ quick and efficient ball movement that saw them claim the four points ahead of the Rebels. With both teams being incredibly fumbly and wasteful with ball in hand, the game lacked class at times in tough conditions. Jackson Callow was outstanding with a four-goal haul for the Devils, whilst Oliver Davis and Will Peppin starred. Defensive pair Matt McGuinness and Sam Collins were a force to be reckoned with for the Devils, combining for a whopping 18 rebound 50s and 15 marks. Riley Polkinghorne amassed a whopping 39 touches for the Rebels, with Matty Lloyd and under-ager Jack Tillig working hard alongside him in the middle.

Calder Cannons are back on a winning run after edging the Northern Knights by nine points in tough conditions. The match marked a return to Preston City Oval for the Knights, but the home ground advantage proved a minor factor as Calder adjusted better to the wet conditions after an opening quarter deadlock. An efficient showing in front of goal proved the difference, especially in the second term when Calder converted four-straight goals to build a match-defining 17-point lead – helping them over the line despite having one less scoring shot. Ned Gentile continues to impress for Calder, notching up another best-afield nod on the back of 21 disposals, six clearances and five inside 50s, while Jeremy O’Sullivan caught the eye with an equal game-high three goals from 17 touches. Max Simpson was the leading disposal-getter on the ground with 27, working admirably around the ground to also clock up 12 marks, six rebound 50s and five inside 50s, with Curtis Brown also finding plenty of the ball (23 disposals, four rebound 50s). For the Knights, over-ager Ayce Taylor was named best for his 23-disposal effort, just in front of leading ball-winners Sam Philp (25 disposals, five clearances) and skipper, Jackson Davies (22 disposals, six rebound 50s). James Lucente was their only multiple goal kicker with 3.1, but bottom-age key forward Ben Major was also dangerous forward of centre. The loss is a second-straight for Northern after it won three consecutively, set to back it up with a clash against ladder-leaders, Dandenong. Meanwhile, Calder will hope to extend its hot streak next week against fellow Round 9 winners, Oakleigh in what should be a cracking game.

Oakleigh Chargers made it three wins on the trot as they comfortably accounted for the Murray Bushrangers by 57 points, consolidating their top eight standing. After scraping over the line by under a goal in each of their last two outings, the Chargers emphatically returned to form on the back of huge second and third quarters where they piled on 11 goals to three to establish dominance. Goals came in droves for the winners, with five of their six goal kickers claiming multiples – led by bottom-ager Connor Stone and Nicholas Staphopoulos, who each bagged five majors. Both were named amongst the best, with the bottom-aged midfield pairing of Fraser Elliot (26 disposals, six inside 50s) and Lochlan Jenkins (24 disposals, eight clearances) again right in the thick of it, and Vincent Zugari (17 disposals, seven rebound 50s) also solid. Jimmy Boyer was the clear best for Murray on a tough day, amassing an equal game-high 27 disposals and nine rebound 50s, with Vic Country squad member Cam Wild (20 disposals, 2.3) also good. Hudson Kaak joined Wild as the only other Murray multiple goal kicker (three), with over-ager Will Christie (12 disposals, nine tackles, 26 hitouts) working well around the ground. Murray’s search for a third win heads to Tasmania next week as they ready themselves to do battle with the Devils, while Oakleigh hosts and in-form Calder side with both teams looking to stretch their win streaks.

Eastern Ranges consigned the Geelong Falcons to a third-straight loss despite some troubles in front of goal, claiming victory by 40 points to jump into third. The Ranges kept their opponents goalless in the second and fourth quarters, while taking full advantage of the one-way breeze to boot three majors in each of those terms – which proved more than enough. The result could have been blown out far worse had Eastern converted its 25 scoring shots better, but the Box Hill City Oval conditions hardly ever make for pretty football. Mitch Mellis responded to being left out of the Vic Metro side well, collecting a monster 39 disposals, 10 clearances and seven inside 50s in yet another best-afield performance for Eastern. Zak Pretty was next best in the ball-winning stakes with 28 disposals, with skipper James Ross (13 disposals, six marks) solid in defence, Mihaele Zalac (19 disposals, eight inside 50s) showing signs, and Jonte Duffy busy with three goals. Sam Bourke continues to put his hand up for Geelong despite the side’s down form, named best for his 21-disposal effort off half back. Chas Karpala was not far behind with his team-high 24 touches and nine marks, while bottom-ager Cameron Fleeton was impressive alongside Bourke in the back half with 15 disposals and six rebound 50s. Not being massively depleted by the national carnival worked to the Ranges’ favour as they fielded a near full strength side in the face of Geelong missing both of its co-captains. Both sides are set to take part in a MARS Stadium double-header next Saturday, with Geelong opening the show against Sandringham while Eastern clashes with GWV.

Bendigo Pioneers suffered its sixth-straight loss, held goalless in the second half to go down by an even seven goals to the Western Jets. The Pioneers have suffered massively on the back of losing their star players to school football and now, Vic Country commitments, and this game highlighted that. The low score broke Bendigo’s two-game run of putting 74 points on the board, with Western booting four goals each in the third and fourth terms to build its winning margin. Bottom-ager Samuel Clifford booted a game-high four goals for the Jets, joined by over-ager Daniel Pantalleresco and Luke Heaney with multiple goals. But it was Lucas Rocci who impressed most, racking up 34 disposals (29 kicks), 12 marks, and 12 rebound 50s to be the winner’s clear best performer, while Eddie Ford‘s 22 disposals was the next highest. Leading Bendigo ball-winner Logan Fitzgerald (29 disposals, five clearances) was named best in a losing effort, with Sam Conforti (27 disposals) Braydon Vaz (21, seven marks) solid, and Aaron Gundry (19 disposals, 28 hitouts) the only Pioneers goal kicker to also be named amongst the best. While Bendigo can enjoy a week off, Western faces a tough task in backing up its win against the surging Gippsland Power in Round 10.

The Sandringham Dragons overcame massive outs and a half-time deficit to get the better of fellow top four fancies Gippsland Power in a 25-point victory to see out Round 9. The Dragons clicked into gear after being held well in a deadlocked first half, kicking away with seven goals to three over the third and fourth terms to snap up a sixth win. Kyle Yorke found his way back onto the scoresheet in emphatic fashion with 5.2 as the game’s only multiple goal kicker and Sandringham’s best afield. Potential St Kilda father-son pair Jackson Voss (27 disposals, seven tackles) and Tyson Milne (25 disposals, eight marks, seven rebound 50) benefitted from greater midfield minutes as other Dragons to impress, while Lachlan Lamble and Blake O’Leary matched Voss’ game-high haul of 27 touches. Luke Williams was the only Power player to find the goals and be named in the best, with Jake van der Plight (20 disposals, 11 tackles) and Leo Connolly (20 disposals, one goal) leading the possession stakes. Tye Hourigan was named Gippsland’s best though on the back of 17 disposals and five marks, but it wasn’t enough to help the Power cover for the heavy losses they suffered due to Vic Country selection. Sandringham’s form without many of its stars proved the difference, with Gippsland hardly experiencing the same test to its depth before this outing. The Power have the chance to rectify the loss against Western next week, while Sandringham travels to face Geelong at MARS Stadium.