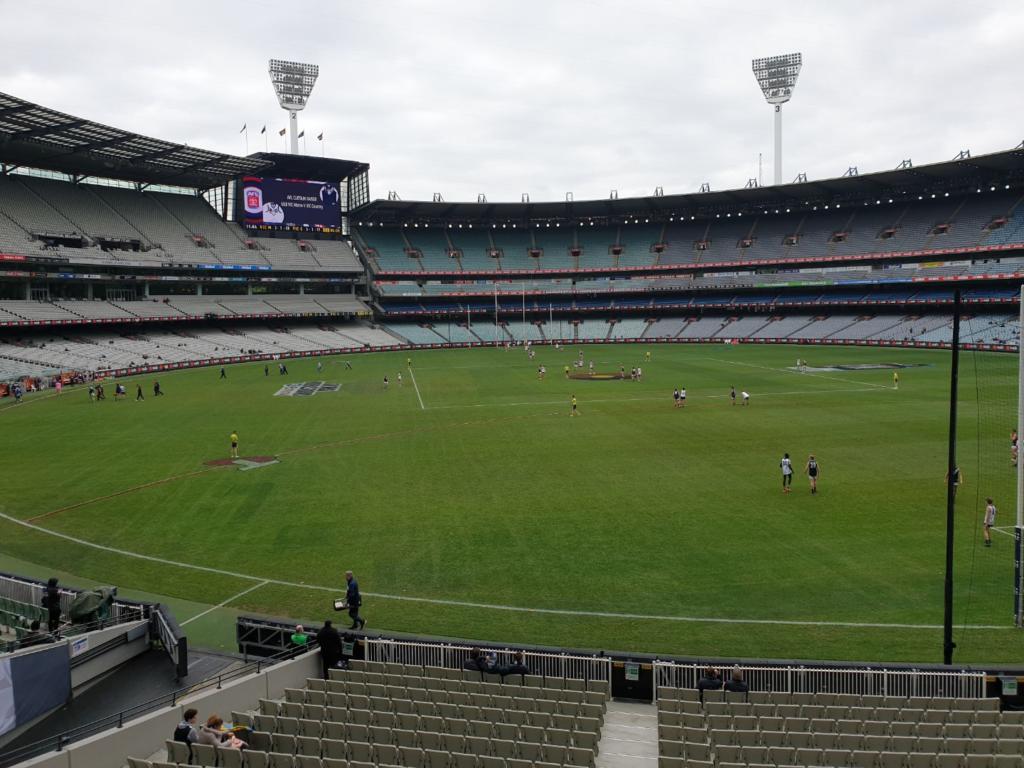 VIC Country has upstaged its highly fancied Victorian rivals, defeating Vic Metro with maniac pressure and four quarter consistency. While Metro started strongly and had a patch early in the second term, it was mostly a game that belonged to Country with the defensive work of the back six, and elite kicking from Hayden Young and Lachlan Ash ensuring that the Country came away with the 9.10 (64) to 7.9 (51) win. Gippsland Power’s Josh Smith booted three first half goals, while Ned Cahill managed two, while Metro had seven individual goalkickers for the game, as Matt Rowell and Noah Anderson were the losing side’s best.

After Country started with all the attacking, it was Josh Honey who slotted the first major courtesy of a perfect pass inside 50 from Western Jets’ teammate, Darcy Cassar. Rowell and Anderson were going head-to-head with Sam Flanders and Thomson Dow in the midfield, with the latter getting the job done. Young was clearly the standout player on the ground in the first term, racking up 10 disposals, three marks, two inside 50s and three rebounds, with Josh Smith capitalising in the quarter with two majors, while fellow Gippsland Power tall Charlie Comben also made life difficult for the undersized Brodie Newman, booting a third Country goal. Metro was still on top though having converted majors through Harrison Jones and Cassar. Serong and Dow finished the term with eight touches and three clearances each, while for Metro, Cassar and Sandringham Dragons’ Jack Mahony were working hard for a team-high five touches.

The second term saw Country take control, capitalising on a couple of Metro misses to boot the only the two goals of the term. Cody Weightman and Fraser Phillips missed opportunities, but it was Elijah Hollands who conjured something out of nothing from just inside 50 to boot a terrific goal roving Comben. When Josh Smith booted his third for the game, Country were on top. Despite the best efforts of Anderson (10 disposals in quarter two) and Rowell (nine disposals) who took over the leading ball winners for the Metro side, it was country who would head in 12 points ahead after Comben missed a chance after the siren to go in further in front. Dow had the most that term for Country with seven touches to lead everyone on the field with 15 at the break, while Young, Ash and Jay Rantall all headed into half-time with 14 disposals each.

Metro made the start they needed early in the third term with Fischer McAsey booting a goal in the opening few minutes to gut the deficit to six points. Moments later, a nice quick ball movement starting with Rowell on the defensive side of the wing ended with Lachlan Potter hitting up Mahony having a set shot which unfortunately for him drifted to the left and fell short for country to regroup. It did not take long for the dominance of Anderson – who surpassed 20 touches midway through the term – and Rowell to start paying dividends. Rowell himself managed to get on the end of one, snapping a goal from point-blank range. With all the momentum in Metro’s favour, it took a terrific crumbing goal from Cahill who dribbled it home to put Country back in front. Mitch Martin then put in a terrific effort from the boundary but was touched on the line, but Country’s forward pressure forced a turnover and Comben found Sam Flanders, but also missed the chance, hitting the post. Both sides were making errors going forward under the pressure. Young’s kicking was a delight with a perfect non-preferred side kick in-board which led to another chance for Country but Weightman’s snap just missed. Weightman quickly made up for the miss with a great kick inside 50 to Smith who like his Power teammate Flanders, hit the post. While Metro dominated the term early, the recovery by Country in the second half had them nine points up at the final break, with narrow misses potentially damaging for the Country side.

The first goal in the final term was vital, and it was a team effort from Country who found the major through Flanders. The work from midfield seeing Ash find a target inside 50 of Cahill, before the Dandenong Stingrays talent hit-up Flanders who made no mistake. Just as it looked like Country would be taking control, a nice play from Metro set up a running Finn Maginness who made no mistake from point-blank. The next eight minutes was all Country with many inside 50s as Fischer McAsey did his best with some huge intercept grabs, but the overwhelming run of Country was telling as Rantall set up a goal to Mitch Martin who stretched the lead to 14 points with 12 minutes left. When Cahill read the stoppage play perfectly, he ran through a couple of players, grabbed a one-touch ball and kicked quickly off the boot to put it straight through the middle for his second. Country now led by 20 points with just nine and a half minutes left in the game. Flanders had a chance to put the icing on the cake with just over five minutes remaining but it missed to the left and Metro had the slightest of chances. But for every Metro forward foray, the Country side had answers with Brodie Kemp, Sam De Koning, Young and Ash holding up perfectly. Hugo Ralphsmith booted a late goal with 10 seconds remaining, but it was just a consolation goal with Country victorious over their state rivals.

Young finished the game as best on ground with 29 disposals, seven marks – two contested, seven rebounds and two inside 50s, while Serong was terrific in midfield with 22 disposals, two marks, five clearances, four inside 50s and seven tackles. Ash, Flanders and Rantall all had 21 disposals win the win, while Kemp held up in defence with Young, recoding six rebounds to go with his 16 disposals and four marks. For Metro, Rowell had 28 disposals, eight marks, five tackles, three clearances, three inside 50s and a goal, while partner-in-crime Anderson had 25 touches, five marks, eight tackles and five clearances. Louis Butler (24 touches) found plenty of the ball, while Newman and McAsey were strong in defence, taking 13 marks between them.