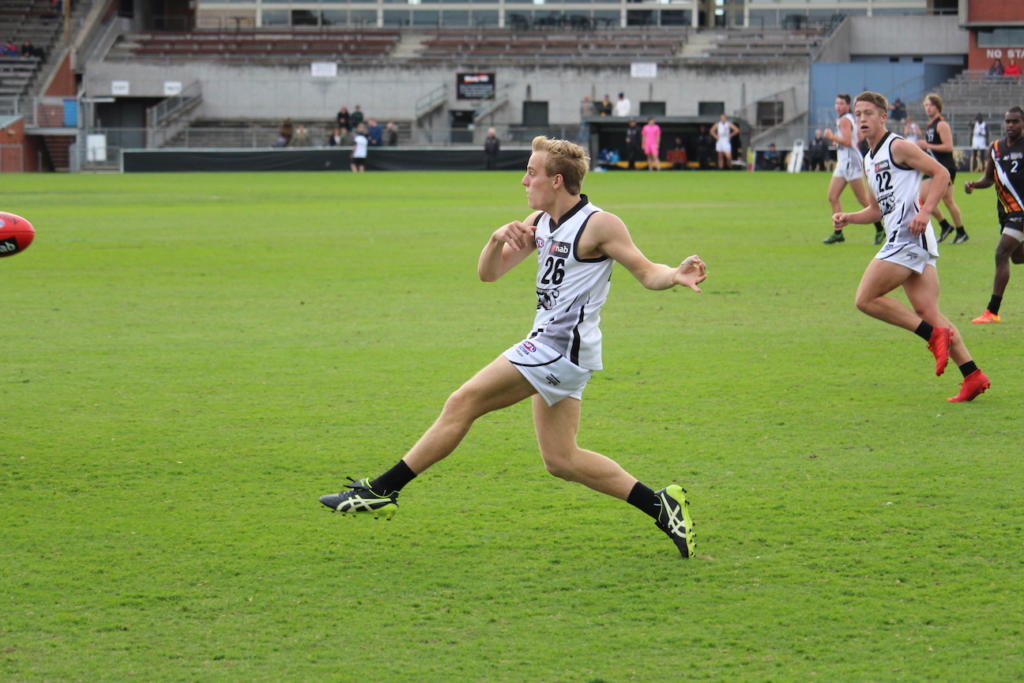 SOME sides will be heavily depleted heading into Round 9 of the NAB League Boys competition as Vic Country and Vic Metro the National Championships on Saturday, but there will still be plenty of talent running around with games spread evenly over Saturday and Sunday, and between Metro and Country grounds.

The Greater Western Victoria (GWV) Rebels will be looking to snap a three-game slide when they host Tasmania Devils in Ballarat to open Round 9. The Rebels’ only two wins thus far have come against sides with just six collective ladder points, but they have remained a relatively competitive side nonetheless – going down by less than 14 points thrice. Another usually competitive side has been their weekend opponents, Tasmania, with the Devils scrounging three impressive wins while also unluckily going down by under a goal twice in the last three rounds. The Rebels will have to search for some pretty significant cover with much of their midfield set to earn Vic Country selection in Saturday’s MCG hit-out, and should have the means to do so to an extent. The Devils, meanwhile, will have no such issues coming into the game with the Allies’ first game still a week away. A development weekend should see both sides come in nice and fresh, despite a few players having participated in the recent Allies-Victorian trial games. Expect a close one, with the Rebels usually good at home and Tasmania set to jump at the opportunity to post another win.

NAB League football returns to Preston City Oval this week as Northern Knights host Calder Cannons in the round’s sole all-metro clash. Much of the Northern and Calder playing groups spend their development weekend either cheering on the girl’s side in their premiership tilt on Saturday, or suiting up for Vic Metro in the final set of trial games against the Allies on Sunday. Looking to take a leaf out of the girls’ book, the Knights will hope to return to the winners list here after Oakleigh snapped their previous three-game winning run last time out. A fourth win for the season will be a tough ask against an in-form Calder though, with the Cannons winning four of their last five games as they build nicely into the year. While both sides will be hit to an extent by the National Championships opener on Saturday, the likes of Northern’s Josh D’Intinosante and Calder’s Sam Ramsay should still line up in this game after missing out on selection. Expect another tight one as some of either sides’ better talent remains available for selection, and with a mid-table bottleneck emerging early on.

Murray will continue its search for form when it hosts the Oakleigh Chargers in Wangaratta to see out Saturday’s proceedings. The Bushrangers have shown good signs and found themselves in winning positions throughout the first eight rounds, but are languishing as the second-worst placed Victorian side at 2-5 as it stands. They certainly have the talent to have bettered their disappointing start, and it showed with three of their losses coming by under two goals. Their clear-worst loss came last week against Calder by 50 points, so the Bushies should come out hot early on in an attempt to rectify their previous effort. On the other hand, Oakleigh have shown less than what their potential would have suggested coming into the year, with their depth seriously tested as school football and representative commitments has stripped the core of their side. Still, they sit at the bottom of the top eight as one of five teams with four wins, with their last coming in a six-point thriller against Northern. Aside from two losses in excess of 70 points, the Chargers have done well in their last two outings to hang in there with key players out. There is plenty on the line for either side, and it should look very even on paper with stars from both teams set to miss.

The Eastern Ranges will hope to continue their consistent season and get back on a winning streak when they face a lowly Geelong Falcons side on Sunday. A surprise packet to this point, the Ranges have proven their worth thus far with some massive wins (three by over 59 points) and by toppling fellow top-four contender, Sandringham in their last outing. The Ranges also did well to stick with second-place Gippsland the week before that and have managed their 5-2 record on the back of even team performances. Geelong has had a much tougher time of it on the back of some back luck on and off the field, holding two heartbreaking losses and a draw which could easily have gone their way, and having star player Cooper Stephens out injured. Inaccuracy in front of goal hurt them last time out as they returned 2.10 in a 28-point loss to Western, so they will be looking to improve on that. Both sides have five players selected in the initial Victoria Country and Metro squads, but could well have some of them available through the National Championships and in this game. With both teams coming in relatively unaffected and following a week off for most, expect them to hit the ground running early on.

Western Jets will be hoping to cling onto its top eight spot with a win against the Bendigo Pioneers when they do battle in windy Williamstown on Sunday. The Jets have done well to notch up four wins thus far to sit in a traditional finals spot, albeit with their wins coming against opposition no higher than tenth. With their record as it shows, the Jets should consider themselves a good chance in this one against the 2-5, twelfth place Pioneers. Despite only three of their stars being picked for Vic Metro duties, they may still struggle with most of their better performances coming with all three in the line-up. On the other hand, Bendigo will be without the likes of Thomson Dow and Brodie Kemp as part of five possible Country representatives, but have competed without said players for most of the year and may adjust better. Having said that, the Pioneers have not added to their two wins without Dow and Kemp, but have gone down by a combined total of just 23 points over the last three weeks – with one loss coming after the siren. This should be a competitive one, with both line-ups shaping as being relatively consistent with what they have fielded all year.

The final fixture for Round 9 shapes as the best of the lot, with Gippsland Power hosting the Sandringham Dragons in a top-four clash at Morwell Recreational Reserve. The Power have surged up the ladder after a Round 2 hiccup against Dandenong, with the undefeated Stingrays remaining the only side to have toppled Gippsland to this point. The Dragons suffered both of their two losses in the last three rounds, with the most recent blemish on their record coming to fellow top-four side, Eastern. The strength of either side shows beyond ladder position, with both the Power and Dragons among the heaviest hit by National Championship selection, with nine and thirteen players picked respectively. The depth of both sides will be stretched heavily as a result, but they still have their own reasons to come into the clash with a bout of confidence. Gippsland have been competitive in each game and have scored no less than 65 points this year – with a high of 98 coming last week. Meanwhile, Sandringham has already competed without much of its top-end talent due to the school football season, and has managed to stay well within the top four hunt. Expect a cracker despite the absence of absolute top-end talent, with the top four close to being shaken up by five sides sitting just one game out.