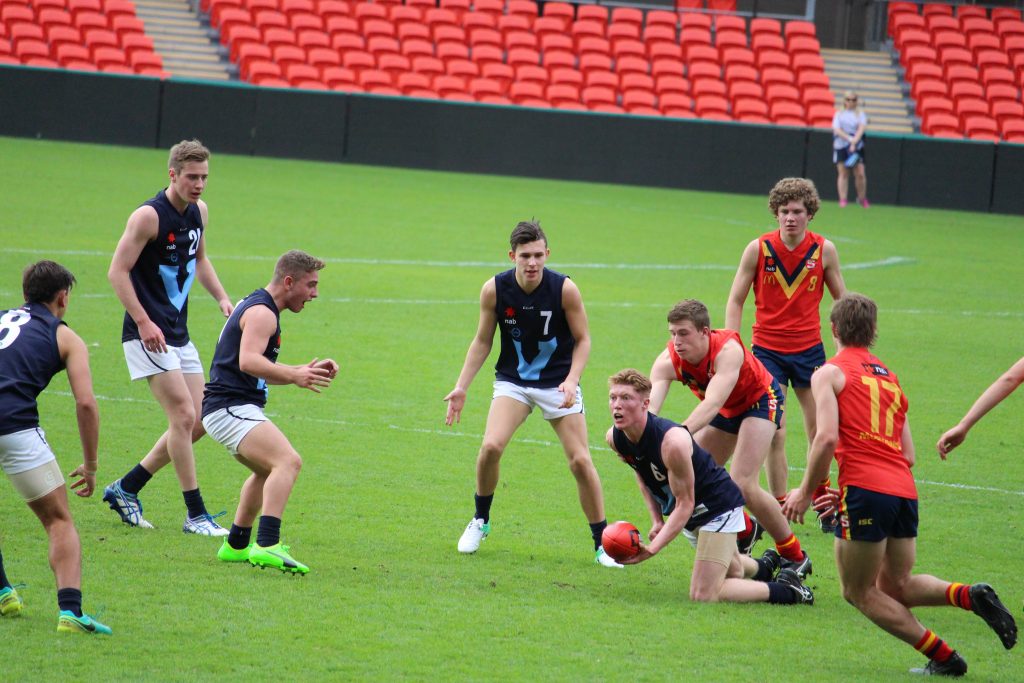 VIC Metro’s top-end talent is again something that will hold it in good stead this season, with quite possibly the top two picks in this year’s draft – Matt Rowell and Noah Anderson – as well as a host of skilful types, strong marking talls and speedy smalls. If they are not the team to beat, then Metro will be fairly close with South Australia, as the two sides that have been the top two sides the last couple of seasons will again lock horns in what could be a huge clash.

A prototype inside midfielder/forward who is strong in the contest and above his head, Anderson is readymade for senior football, and it was all about ironing out the inconsistency in his game. In 2019, Anderson has not put a foot wrong with some massive ball-winning efforts, and as we saw in his bottom-age year championships, he is capable of kicking a bag on the big stage – he booted four goals against Western Australia in Perth. Will be in a familiar setting in the midfield with good friend and teammate, Matt Rowell, as well as Oakleigh ruck Nick Bryan.

After being a half-forward/wing in his bottom-age year, Cassar has transformed into a defender with great effect in 2019. He has been a prolific ball-winner – having as many as 41 touches in a game this season – as well as a dominant rebounding force. He is a player who could force his way into the first round with a good season, and while most of the talk is around the boys from Oakleigh, Cassar has been nicely developing and could be a sneaky chance to come away from the carnival as one of Metro’s best. He has been named forward for the first game against Country which will be interesting to see how he fares after playing back this season.

The standout key position forward in this year’s draft, Dean is a clean marker who works up the ground and is able to be in sync with his teammates. The Dragons forward could fill out further, but his work rate and long ranging leads make him a dangerous prospect, as does his reliable set-shot goalkicking. Before he left to play school football, Dean was leading the NAB League Boys goalkicking, and is one of a number of chances to take out the goalkicking for the championships if he can seize his opportunities.

Not much left to be said about Rowell, who seems to have just about done everything right since he stepped onto the scene as a 16-year-old for Vic Metro. He has been a standout at all the national championships, he was the best player in Oakleigh’s losing Grand Final, the All-Stars game and against Casey Demons both at the MCG. Every time he sets foot on the hallowed turf he stands up, and expect him to do the same again. The clear standout player in the draft, and most consistent with very few holes in his game.

Despite standing at 195cm, Worrell is more of a rebounding defender than a key position defender, mostly due to his light frame of 74kg. He uses the ball well and is able to intercept mark and project it forward, something that will no doubt be of use in Metro’s defence over the carnival. Given his height, Worrell can be flexible in his opponent and play against taller opposition if one of the other defenders is losing his battle. Metro will be keen to use his rebounding as a way of setting up scoring opportunities down the field.

One of the best kicks in the draft, the lightly built defender/midfielder has come along rapidly over the past 18 months. So much so he is very much in the conversation for top 10 despite his smaller stature. He thrives on winning the ball and running with it, using pinpoint kicks coming out of the back 50 and making good decisions with ball-in-hand. With the likes of Country having so many dangerous forwards, Bianco becomes an important player with his composure under pressure.

The fastest player in the draft crop has lightning acceleration and while he is arguably the lightest player in the draft crop, can burn off just about anybody once he gets time and space in front of him. He draws opponents with his long bouncing runs, and he can play off half-back or on a wing, looking to break up play. Still has areas of his game to build upon, but in terms of X-factor, he certainly has that special ability to make things happen with his speed.

The talented forward is the epitome of X-factor given he has the capability of taking a game away from the opposition in a quarter. He can be basically unsighted for most of the game, then arrive with three or four goals in a quarter and has everyone excited for when he puts together a four-quarter performance. One of the most talented players in this group, Williams has been trialled down back this year to build his defensive pressure, but he is at his most damaging when he can play forward given his strength in one-on-ones, and then pinch-hit in the midfield.

The standout ruck from Victoria has a case to be the standout ruck across the country. Along with Western Australia’s Luke Jackson, Bryan has been a rapid developer of his craft, coming from nowhere to burst on the scene as a genuine top 20 chance. Athletic with elite acceleration for a player of more than 200cm and 87kg, Bryan will be a handful for opposition sides. Expect him to push forward and potentially hit the scoreboard as well.

Newman was strong last year, but his numbers this year suggest he has gone to another level again. He provides leadership and direction in the Cannons defence, and positions himself well in the back 50. Newman has become an intercepting machine, and teams have tried to avoid him when kicking inside 50. Has had a number of big games in the NAB League Boys competition this year, and Vic Metro selectors have shown faith in him taking a taller opponent despite his 191cm frame, as he is built to take on taller players.

As mentioned off the top, Vic Metro is a side that has the potential to take back the National Under 18 Championships from South Australia. After looking impressive last year, Metro was comprehensively beaten by the Croweaters in the finale at Etihad Stadium, and now Metro will travel to take them on in South Australia. They should have the measure of Vic Country and the Allies, with Western Australia the great unknown – the Sandgropers have top-end talent, but it is always the next tier that announce themselves at the national championships. It was in fact the Sandgropers who won the corresponding Under 16 championships with this group, but so many Metro players have developed since then. The likes of Darcy Cassar, Daniel Mott, Jamieson Rossiter and Josh Honey will benefit from the amount of inside midfielders who will feed them in the forward half. All are capable of having big games and use the ball well which makes them the ones to go through when going forward. The depth in the Metro line-up might not be the same as last year, but the top-end talent is once again impressive, and unlike last year, they are all fit and ready to go. The midfield is superb and the talls are the best across the carnival, while they have enough X-factor to create opportunities at ground level. Metro starts their campaign tomorrow and all things going well should kick off their championships with a win.