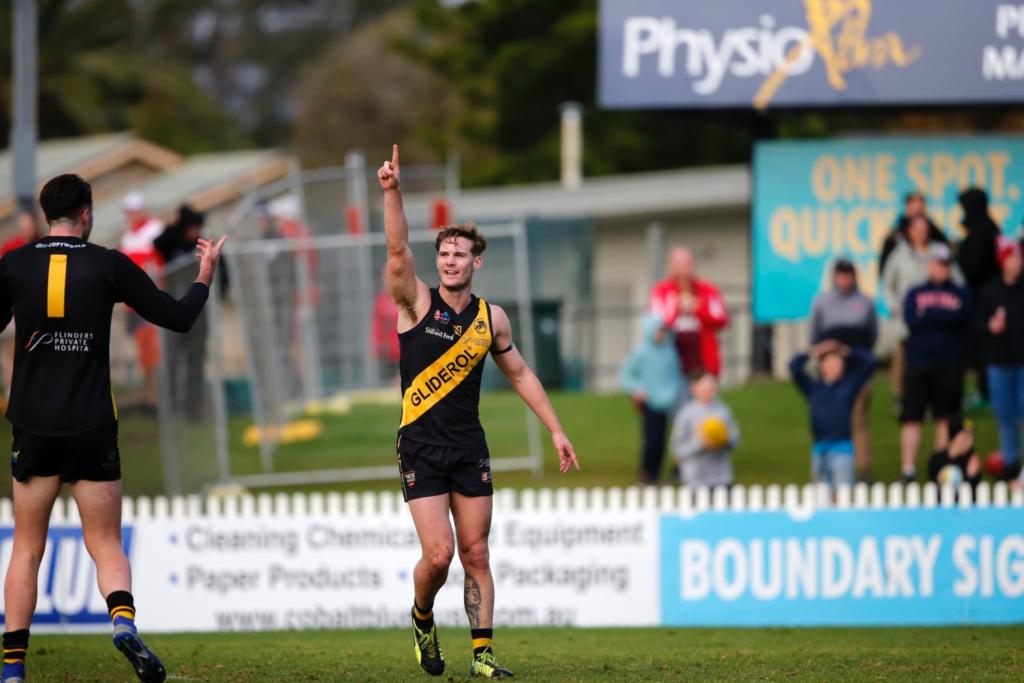 IT was a quiet week for the South Australian National Football League (SANFL), with the sole game as part of a split round, and some top-end Under 16s, Under 17s, Under 18s talent and South Australian squad members away from their clubs with trial games as part of National Championships preparation. It was a significant week off-field for the SANFL competition with the mid-season AFL draft impacting the League with five South Australian players drafted. Jamie Morgan and Tom Wyman take a look at what made news in South Australia the past week.

Glenelg consolidated its grasp of top spot with a 49-point victory over Port Adelaide in wet conditions at the bay. Defying early inaccuracy, the high-flying Tigers controlled much of the game against their AFL-listed counterparts, before a stellar third-term put the game all but beyond the Magpies grasp. The slippery conditions meant contested ball was key, and Glenelg’s engine room was strong all day, led by young duo Luke Partington (34 disposals, six marks, six tackles, six clearances) and Jonty Scharenberg (23 disposals, five marks, seven tackles and two clearances). Fellow onballers Marlon Motlop and Matthew Snook helped overcome a Magpie onball brigade led by prolific 2016 draftees Joe Atley (31 disposals, four clearances) and Willem Drew (31 disposals, nine tackles, nine clearances), who battled hard through all four quarters. Glenelg defenders Chris Curran and Aaron Joseph controlled the play in the backline, whilst up forward, Liam McBean booted four and was supplemented well by Luke Reynolds‘ pair. Also chipping in with two was medium forward Lachlan Hosie, who was recently drafted by North Melbourne in the AFL’s Mid-Season Rookie Draft. Jack Trengrove was slightly down on his usual output, managing 21 disposals and seven tackles, however Sam Mayes, Kai Pudney and Riley Bonner all won their fair share of the ball.

South Australian Under-18 squad member Will Gould showed his defensive flexibility, manning the 198cm Todd Marshall and 195cm Dallas Hill, before rolling onto the medium-sized Aidyn Johnson, Mitchell Mead and Tobin Cox, at times. Gould spent the entire game on-field, testament to his strong endurance base, and was rarely beaten one-on-one. Additionally, he was able to zone off and take several intercept marks (seven marks in total), often playing as the last man back and filling ‘the hole’ in the defensive-50 to good effect. He was extremely clean by foot, granted most kicks were short, but provided rebound when necessary. Arguably his best moment of the day was a contested, overhead mark deep in defence to save a shot at goal in the first half. His third-man up spoil, which killed the contest and flew 20 metres out of bounds, into the neighbouring cricket nets, further demonstrating the rare talent he possesses. He finished with 17 disposals, seven marks and five rebounds.

SANFL clubs were impacted this week, with a drafting of some talent from the competition and putting some SANFL sides into a tough position.

Players drafted from SANFL were:

SANFL remained firm in its opposition to the mid-season draft despite the competition producing top end talent, the impact on the competition for the remainder of the year for these clubs affected will be detrimental according to SANFL CEO Jake Parkinson’s statement.

With Glenelg losing leading goalkicker Lachlan Hosie, the impact on their forward line will be a watch as they also lost other key forward Josh Scott to injury earlier in the year. West Adelaide lose their two key ball getters and prime midfielders which will make their season harder from here on in.

Sacred Heart held off arch-rivals Rostrevor by ten points on home soil to remain undefeated, four games in to the Messenger Shield competition. Both sides were without arguably their best players, with state representatives Will Day (SHC) and Cameron Taheny (Rostrevor) both sitting out. For the Hearts, captain Beau Macrae was again excellent in the middle and at half-back, as were South Adelaide duo Zach Dumesny (SA squad) and Marcus Lippett. For Rostrevor, Anzac Lochowiak was solid without being at his damaging best. Sacred Heart now sit as the only undefeated side for the year and look to launch into the second half of the season

In other games, PAC narrowly escaped a scare against Westminster holding on by seven points, whilst PAC were missing some of their top talent in particular Kossie Pickett and Karl Finlay. St Peters accounted for Trinity by 74 points, while Immanuel defeated Scotch by 33 points.