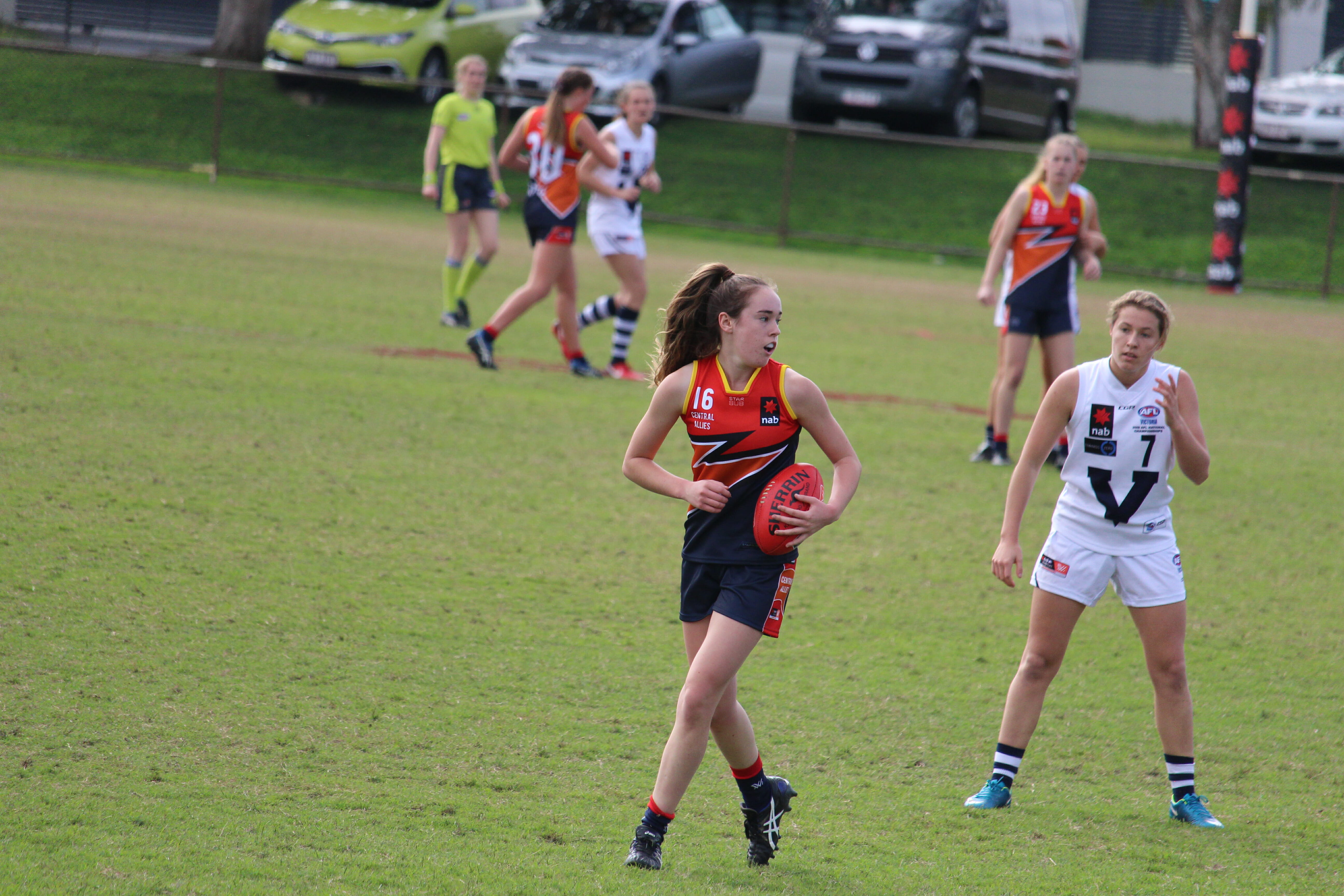 IN the second of two previews ahead of the first round of the AFL Women’s Under 18 Championships, we take a look at South Australia and Northern Territory who clash tomorrow and Sunday in their two games which will help determine the final Central Allies squad. The Central Allies then fly to Queensland to take on the Eastern Allies, Western Australia and Queensland from July 8-12. Below we take a look at some of the key players to watch.

The talented bottom-ager was identified as one to watch from last year, and despite her smaller size of 159cm, the 17 year-old showed no signs of being outmuscled by bigger opponents in season 2019. In the SANFL Women’s competition, Ballard averaged 16.1 disposals, 4.1 clearances and a massive 5.4 tackles in her 10 games, becoming a defensive barometer for the Bloods. In every game, Ballard laid at least four tackles, and laid six or more on four occasions. She will likely rotate through the midfield laying some bone-crunching tackles and applying serious defensive pressure to the opposition.

A talented player from a young age, Breed stormed to a massive win in the NTFL Under 18 Girls Best and Fairest award in 2016/17, polling 30 votes to run away with the medal. In case anyone thought that might have been a one-off, she backed it up with a second medal win a year later with another dominant season. She could well have won a third consecutive medal had she not been finally called up to the Buffettes Premier League side in the 2018/19 season, leading after eight rounds despite not playing since Round 5. She ended up playing 10 consecutive matches for the senior side and will get her chance to shine here.

The co-captain of Northern Territory has been a driven individual and one who is capable of juggling multiple sports, coming with a basketball background. She won two premiership at Under 18s level in the Northern Territory Football League (NTFL) and stepped up to play seven matches for the Buffettes in season 2018/19.

Still a middle-ager and with a year in the system to go, Charlton really stepped up in the SANFL Women’s competition for South Adelaide. Charlton started the season as a dynamic forward, and eventually pushed up into the midfield, booting 11 goals in 12 games and averaging 15.8 disposals per match. Eight of her goals came in three games, including two bags of three, while she might have had even more against Norwood, booting 0.5 in Round 9. Named as the competition’s Breakthrough Player for 2019, Charlton remarkably made the Team of the Year as a 17-year-old and slotted into the forward pocket.

The Northern Territory co-captain is a player with good skill and composure, and one who will bring the experience of playing in the Women’s Premier League 2018/19 Grand Final. She was described by Academy Manager Heidi Thompson as one who is an excellent role model with a high work ethic. While merging states together to form a team will always be tough, expect Clarke to be able to slot into the side for a second straight year after being named in the Central Allies in 2018.

The centre half-back enjoyed a terrific season for the Bulldogs in a two-win year. Holding down a key post in defence, Fry was not a huge disposal winner (9.3 per game), but her hard work and defensive pressure was a standout. Fry averaged 3.8 tackles per game and became known for her clean spoiling, earning her a place in the SANFL Women’s Team of the Year at centre half-back alongside Jaimi Tabb, Madison Newman and Amber Ward in defence.

The overager is one of the few from Northern Territory with AFL Women’s Under 18 Championships experience, having played last year. While unsuccessful in her quest to find an AFL Women’s home, Gault put the disappointment aside to be one of the best players at Waratah, finishing second in the league best and fairest for the club behind Lisa Roberts – who was runner-up overall. Gault is a tough midfielder who was noted by us last year as playing a vital role in defence.

The AFL Women’s Academy ruck is the standout ruck prospect in this year’s draft, and stood tall at last year’s championships against a number of eventually drafted ruck choices in Rene Caris (Geelong) and Lauren Bella (Brisbane). McKinnon has progressed into the South Adelaide senior side this year and has been a standout performer across the season, and is known for her ability to work around the ground. She not only impacts in the ruck, but wins clearances, lays tackles and can drift forward and kick goals. Not only will she likely be the one to watch in terms of rucks, but will be key to giving her midfielders first use.

Another player who stood out in Coffs Harbour in the matches against New South Wales/Australian Capital Territory, Miskin-Ripia is one to watch against South Australia as an exciting player with good composure and ball use. Like many of the Northern Territory players, she has not been able to test herself against some of the best players in the country yet, but is an identified talent who could stand up here.

The South Adelaide midfielder has a nice combination of athleticism and hardness at the ball, dominating at the South Australian pre-season testing event – finishing top three in every athletic test – and then bringing that form into the season. In a stacked Panthers midfield, Munyard managed 16.3 disposals at 75 per cent efficiency, as well as 2.5 marks, 2.7 clearances and three inside 50s, often pumping the ball long from midfield to forward and creating chances inside 50. A high endurance base makes her hard to stop, and Munyard was named on the wing in the SANFL Women’s Team of the Year.

The most elite kick in the team, Newman averaged 18.7 disposals at 99 per cent efficiency in the SANFL Women’s competition. No that is not a typo – 99 per cent efficiency – coming out of the back half for the Bloods. Of those 18.7 disposals, 17.3 were kicks, while also having 5.9 rebounds and 2.7 inside 50s. Along with Amber Ward, will provide plenty of rebound for South Australia and the Central Allies, and be a player teammates look to get the ball in the hands of regularly. Unsurprisingly, her terrific work out of defence saw Newman earn a spot in the SANFL Women’s Team of the Year in the back pocket.

The other AFL Women’s Academy member along with McKinnon is a player who has been a strong leader in a winless side in the SANFL Women’s competition this year. She plays between midfield and defence, and can be an instrumental onballer who finds plenty of it. Averaged 14.6 disposals at 79 per cent efficiency, while laying a massive 5.4 tackles and recording 3.1 clearances in 2019. Having played last year, Tabb is another South Australian with experience at the championships. Despite managing just seven of a possible 10 games, Tabb was named in the SANFL Women’s Team of the Year on the half-back flank.

The teenager was a revelation for the youthful and exciting premiers, standing up on the biggest stage to win the Best on Ground in the 2019 SANFL Women’s Grand Final. Tahau booted eight goals in her 12 games, but saved her best until last with 20 disposals, five tackles, six inside 50s, three hitouts and two goals in the Panthers’ triumphant grand final win over North Adelaide. At 180cm and still a middle-ager, expect there to be plenty of development left in Tahau.

Ward became a key player in North Adelaide’s defence, and a rebounding machine all season, averaging 4.6 rebounds to go with her 12.5 disposals. Named in the SANFL Women’s Team of the Year at full-back, Ward is another defender along with Newman who uses the ball well – 82 per cent efficiency – and is strong when not in possession. Ward is rarely beaten one-on-one and will be another to watch at the championships for her ability to both shut down an opponent and drive the ball forward.

The lightning runner is still a middle-ager and a year to go in the system, but has already shown some nice highlights in the NTFL. Williams won the 100m Sprint Race just over 12 months ago at half-time in the Women’s Premier League Grand Final. She has been an important player for the Buffettes in their back-to-back premierships at Under 18s level.