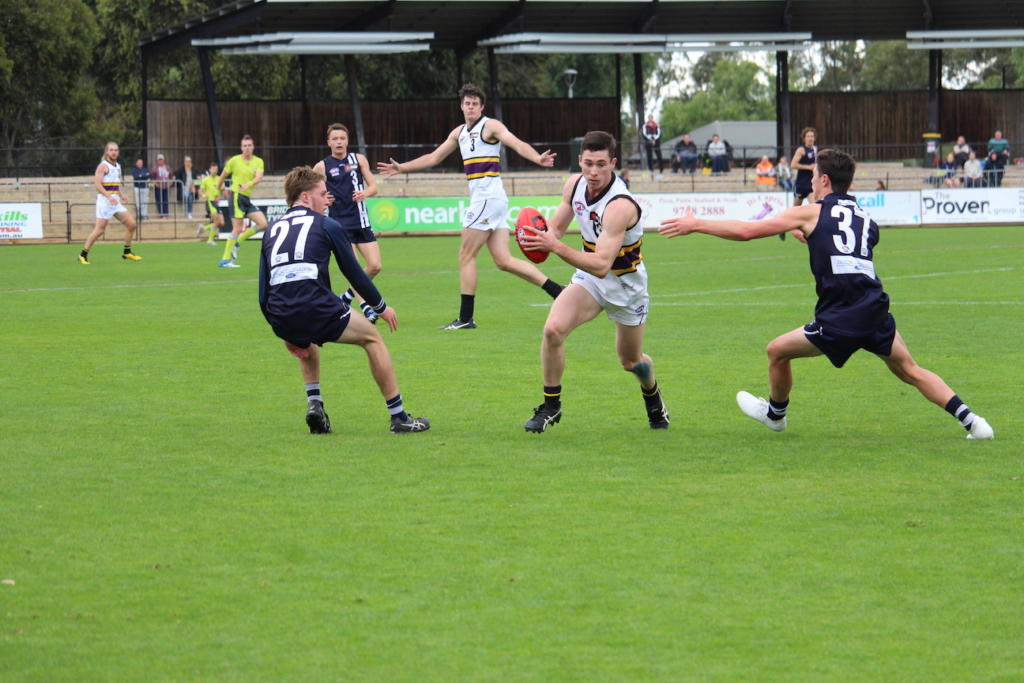 VIC Country heads into the first game of the National Under 18 Championships with plenty of question marks given it has been hit with a number of injuries which forces new coach Leigh Brown to shuffle the magnets around. In what will be a tough start to the campaign, they face cross-state rivals Vic Metro who are considered one of the teams to beat this year given the strength of the midfield. With limited talls available for Country, they will rely on their host of top-end talented defenders and medium forwards, while some players will be crucial in standing up and filling a void for the side in the absence of others.

The rebounding defender is a dominant intercept force who has an elite, penetrating kick that can travel more than 50m, and also be used with 45-degree daggers inboard. One of the most eye-catching players in the Vic Country squad, Ash can also play further up the ground if required, pushing up to a wing or half-forward, but his best role is at half-back. Ash does not rely on handball receives like a lot of rebounding defenders, and similar to Hayden Young, is more of an intercept player who wins a lot of his possessions through marking.

The inside midfielder/forward is a player who will have an impact anywhere he plays, and has a special nous for knowing where the goals are when forward. He often starts forward for Gippsland then after kicking an early goal spends the rest of the time in the midfield until late, using his quick hands and long kicking ability to effect. He is so clean at ground level and shovels the ball out quickly to teammates who are waiting on the outside. He will have an important role as one of the key inside midfielders for Vic Country given the loss of Cooper Stephens.

Kemp can play just about anywhere from midfield to attack and in defence. This year he has played inside midfield in his few games for Bendigo Pioneers. Unlike the other midfielders at Country, Kemp has that bigger frame of 192cm and 82kg who can match it with the taller midfielders, and therefore will be crucial on the inside. Given the injuries to Country’s midfield, Kemp is one who can extract the ball out, and will often choose to kick long inside 50. However he was named in defence for the game against Metro, which might be a sign of where he will play when the opposition has taller forwards.

Despite his size, Serong will not take a backwards step and will apply pressure anywhere on the ground with his determination and willingness to hunt the football. He is deceptively strong overhead and uses the ball well going forward. He can play inside or outside, or as a pressure forward. Serong will likely mix between all those roles, and could be one who stands up when the chips are down because of his natural leadership. Already had experience at the championships, and will be even better this year.

Another penetrating kick of the football, Young is a huge interceptor as he showed the last time he ran out on the MCG against Casey Demons. Young is great overhead, but is the most dominant when unleashing his long, penetrating kick, often marking at full pace and kicking long to a dangerous position. When his team is in control, Young often pushes up to half-forward, intercepts a quick kick out of defence and unloads from long range. He is a player capable of assisting in an inside role, but is most potent when at half-back and will combine well with Lachlan Ash in defence.

One of the top prospects for next year, Hollands is just so exciting whenever the ball goes in his general direction. He is equally adaptable to win the ball in the air or at ground level, and is especially damaging with ball in hand on the run with his sights on the goals. At 188cm, Hollands is tall enough to play a third tall role, something he might be called upon to do despite being a bottom-ager. He can open up a game in a quarter, so if he gets confidence up and on a roll, opposition defenders need to watch out.

Similar to Hollands but with a different way of winning the ball – often long searching leads or double-up leads deep inside 50, Phillips knows where the goals are and usually has plenty of opportunities. He has a long left foot kick and can often do the miraculous, but just needs to iron out his inconsistencies. He is capable of a 20-plus disposal and three-plus goal game playing as a high half-forward, and also sets up opportunities for teammates inside 50. The championships are a perfect time for him to shine in the bright lights which he has promised teammates to do.

As one can see there is no shortage of exciting forwards for Vic Country, and Weightman is a third type of forward who once the ball hits the ground just has some magical traits. He might be small and has a few areas to work on, but he can pump the ball long and put it straight through the middle, or just get separation on his opponent and mark in space. He could be a candidate to play up the ground at times, but if he, Hollands and Phillips are all in the forward 50, Vic Country has some serious X-factor.

The rebounding defender is a player who will likely have to play tall in the Vic Country defence, with Dandenong Stingrays pair, Sam De Koning and Bigua Nyuon the other two keys. With Nyoun also likely to spend some time in the ruck, Clark may be opposed to a taller opponent. He is still solid one-on-one, but his forte is rebounding out of the back half with composure, and like a lot of the Vic Country defenders, is able to intercept a lot of ball coming inside 50. Clark has had a great start to the NAB League Boys season and will be keen to continue that form at the championships.

The biggest improver in the NAB League Boys competition would have to be Rantall. Representing Australia in basketball, Rantall has an elite endurance base which has allowed him to pick up 30-plus disposals time and time again in the NAB League Boys. He stepped up in the trial games for Country and has looked as solid there as in the Rebels’ midfield, and will play inside, but can spread to the outside and have an impact there. He can also find the goals when drifting forward, and it is just about building on his kicking efficiency to take him to the next level.

Vic Country will need everything to go right to stage a challenge in this year’s National Championships given the losses to its midfield through Cooper Stephens and Flynn Perez, while Darcy Chirgwin and Tanner Bruhn have also not played so far this season. Country has a lot of talented small-medium players up both ends, but will rely on some of them to play taller roles in this year’s National Under 18 Championships. Against teams with monster key forwards, a lot will be left to Sam De Koning in defence, while Brock Smith and Jesse Clark will likely have to match up on opponents outside their height and weight division, while Bigoa Nyuon saw time in defence in the Vic Country trial game and will likely play back there. Their mix of forward talent is very dangerous, and if they can get the ball inside 50, the amount of X-factor in there will worry opponents. Country will rely on speed and accurate disposal to win games given its shortage of talls, but with potential top 10 picks, Hayden Young and Lachlan Ash coming off half-back, you know there will be plenty of rebound out of the back 50 to keep opposition players on their toes.