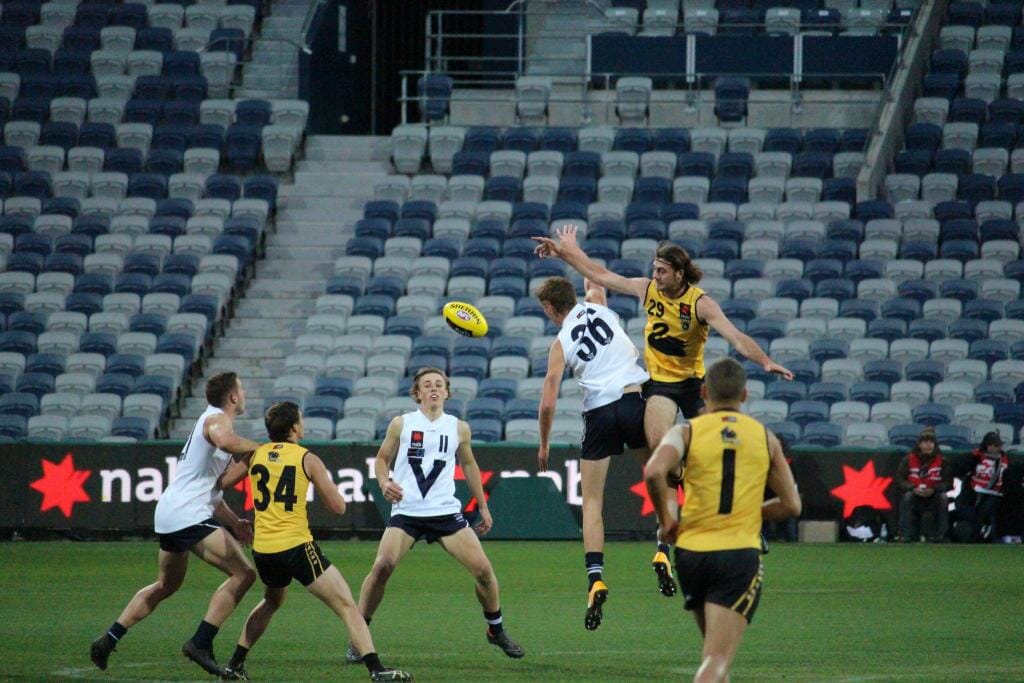 LAST night saw the first AFL Mid-Season Draft in 25 years, with 13 players previously overlooked in last year’s AFL Draft – and many more for some – finding homes, including four former AFL-listed players. We review each pick and take a look at who your club picked up.

The former Fremantle player received a second chance when the Blues called out his name first in the draft. Since returning to the West Australian Football League (WAFL) Deluca has become a premier midfielder, winning the Simpson Medal for Best on Ground in the WAFL’s clash with the SANFL earlier in the month. Deluca adds a stronger body to Carlton’s midfield and is one player that could slot in almost immediately to the side, also having speed in his repertoire which will provide nice highlights for Carlton fans, and also great support for Patrick Cripps.

The Dandenong Stingrays premiership co-captain gets his chance after an injury-riddled 2018 year. Riordan came back as an overager for the Stingrays in 2019, and has averaged 19.7 disposals, 3.5 marks and 4.7 tackles per game – all career best in the NAB League. His six games in 2019 already matched his total from last year, and he is more readymade than many 19-year-old prospects would be, joining premiership teammate Sam Fletcher at the SUNS who was also picked up post-draft. For SUNS fans, Riordan has elite agility clocking up 7.93 seconds in the agility test at the NAB League Fitness Testing Day.

Much like Riordan, Kyle Dunkley returned to the NAB League as an overager following an injury-riddled top-age year for Oakleigh Chargers. Hailing from Gippsland, Dunkley returned to the Power without school commitments now, and immediately made an impact as the clear standout 19-year-old prospect. His average disposal count rose from 13.0 to 18.5, and laid almost four more tackles per game this year. More importantly, Dunkley has played a key role in the midfield rather than as a medium forward, and has nice power in the way that he plays. He joins brother Josh in the AFL, and like Riordan is more of a readymade prospect than other 19-year-olds.

The premier ruckman outside the AFL arguably in the entire country, Michael Knoll was a surprise selection by the Swans considering the amount of pure rucks they have on their list. But with Sam Naismith injured and Callum Sinclair needing support, Knoll fills a need as a readymade ruck who the Swans can call upon if needed. The unlucky Panthers lose their ruck after also losing Keegan Brooksby and then Hayden McLean – who was recruited to replace Brooksby – to the AFL system. Another readymade player.

It takes a special player to be leading the South Australian National Football League (SANFL) goalkicking tally, and that is exactly what Lachlan Hosie has done so far this season. The 22-year-old 189cm forward has booted 21 goals in eight games so far in 2019, averaging 2.6 goals per game. North Melbourne has been craving an extra marking forward, with Kangaroos fans likely to be pleased with the selection. Along with his goals, Hosie has averaged 14.5 disposals and 5.6 marks, while also getting up the ground and producing 2.5 inside 50s per game.

The key position utility has been impressive in his Victorian Football League (VFL) stint with Footscray this year, earning a second chance at the top level after a brief chance with Geelong as a teenager. Still only 21, Gardner has plenty of football left in him, and showed at state level he can play up either end. At AFL level, Gardner has been touted as a Tom Boyd replacement, and given he has already been a part of the Bulldogs’ system, he will not need to adjust to any game plans or tactics like at other clubs.

Essendon were touted to pick up Michael Knoll given they lost Sam Draper and Joe Daniher to long-term injuries, but with Knoll off the board, they opted for fellow South Australian Will Snelling who fills the hole left by the injured Devon Smith. Snelling, like Gardner and Deluca, has also had a stint at AFL level, playing one game with Port Adelaide before being delisted last year. In his seven games thus far, Snelling has averaged 29.7 disposals – ranked in the top 10 in the SANFL League competition – as well as 9.6 tackles, 5.7 marks and 2.7 inside 50s.

One of the more unlucky players to miss out last year on being drafted, the WAFL Colts leading goalkicker has been one of the more dominant goalkickers in Western Australia over the journey. Mayo missed out on playing National Under 18 Championships, but booted 50 goals across 21 games in the Colts competition and has since transitioned between Reserves and Seniors this year in a strong Subiaco side. He has still managed to average two goals per game at Reserves level, and with Paddy McCartin now out long-term, Mayo provides another forward option for the Saints. In terms of his athletic traits, Mayo has elite speed for a tall (2.95 seconds) and elite vertical jump (84cm running jump) which he recorded at last year’s Western Australia state combine.

Cam Sutcliffe became the fourth former AFL player to receive a lifeline in the Mid-Season Draft, and the second to be plucked out by the side he spent time in the Reserves with this year. After being delisted by Fremantle at the end of last year following 104 games and 18 goals, the 27-year-old offers another readymade option for the Power. In 2019, Sutcliffe has averaged 18.7 disposals at an elite disposal efficiency of 88 per cent, as well as 3.7 clearances and 3.5 tackles, more than enough for Port Adelaide to throw him an AFL lifeline.

The son of former Docker, Blue and Cat Stephen, Dillon O’Reilly was a key position player for Western Australia at the National Under 18 Championships, playing forward and through the ruck for the Sandgropers. In 2017 he booted 46 goals as a bottom-ager in the WAFL Colts, making his debut for the East Fremantle League side last year, booting three goals in two games. He has managed two games at League level so far this season, and is a tall option who can play anywhere Fremantle require him to in the future. Like Mayo, was one of a number of tall prospects overlooked last year, but has finally grabbed his chance and will now be able to follow in his dad’s footsteps.

A broken finger that will keep Marlion Pickett out for a couple of months did not deter Richmond from reading out his name at the Mid-Season Draft. The Tigers were keen to add an extra midfielder to their list, and Pickett is considered one of the top state league talents running around. He has only managed the two games this year, including the weekend’s match where he re-injured his finger, but last year managed 21.8 disposals as well as just under five marks and five tackles per game. He has that hard inside edge as well as class, and while he is 27 years old, Pickett will step into the line-up once fit. A great selection for a team in its premiership window.

Collingwood also picked up a readymade midfielder, that being South Australia’s John Noble, who was one of the best in the SANFL’s win over the WAFL earlier this year. Noble possesses a rare combination of speed and endurance which attracted the Pies to the 22-year-old, and while the choice of a midfielder would have surprised plenty of Pies fans, Noble provides extra depth for a side that has been tested with injuries this year. More importantly, being 22, Noble is a player who is a late bloomer with plenty of development left. Expect him to be one who catches the eye for Collingwood’s VFL side until he is set to challenge for a role in the AFL side.

The king of agility earned a place on Sydney’s list as the last pick in the Mid-Season Draft. Despite missing almost an entire season through injury, Hirst did not lose his agility at the Rookie Me Combine last year, breaking Stephen Hill’s AFL record twice – consecutively. After being a pressure forward previously, Hirst moved up to a wing this season and the role paid dividends, winning more of the ball and being able to use his athletic traits to hurt opposition sides in transition. He is one of the more long-term prospects, weighing in at barely 70kg, but he has the athleticism and versatility to make a strong go of the top level.