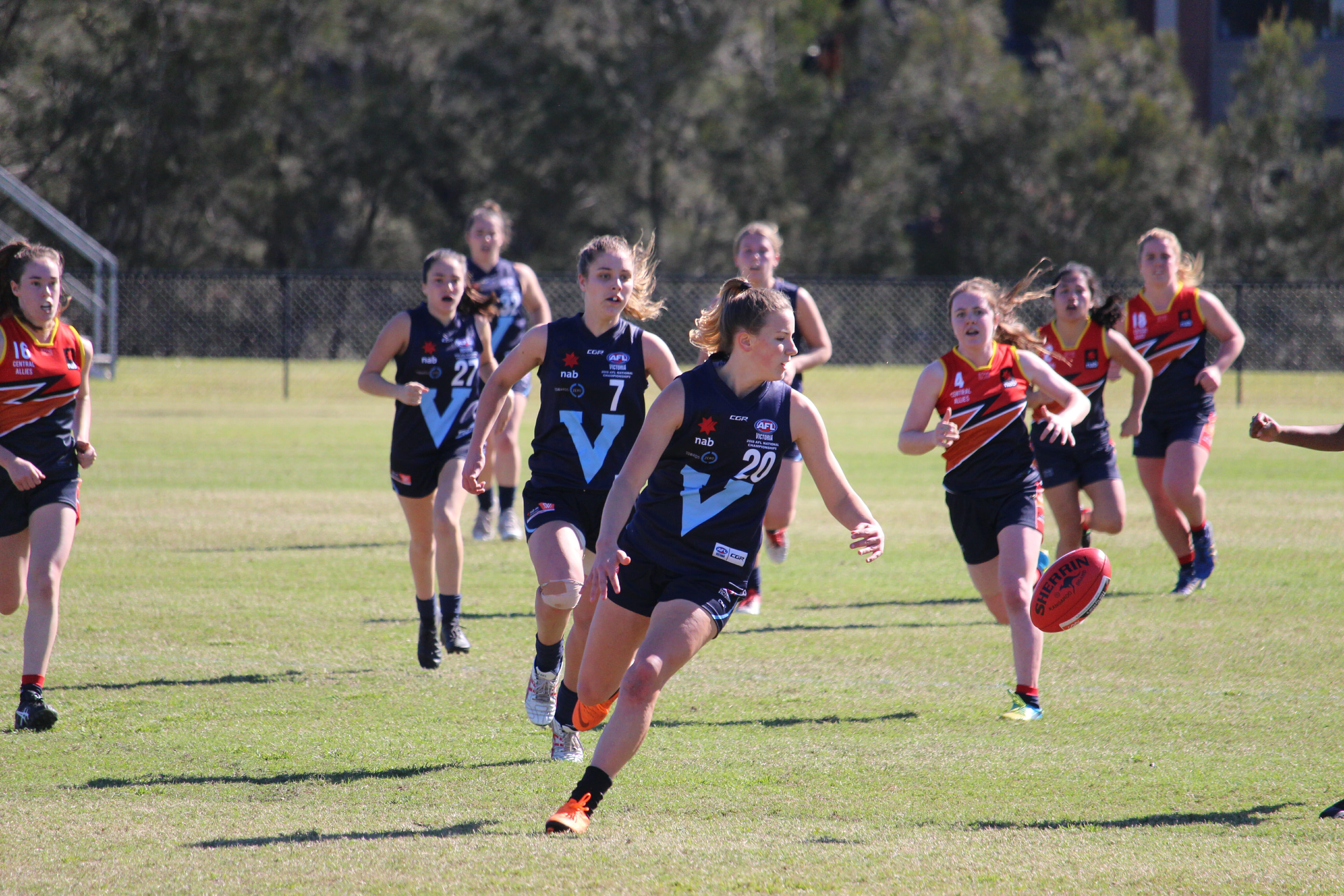 THE final Victoria Metropolitan squad for the Under 18 National Championships has been named, with a number of strong top-age prospects set to lead the charge from some exciting middle-age guns. After looking in-depth at the Vic Country squad last week, we take a look at how each player has stacked up statistically in this year’s NAB League season, as well as what they may bring to the Metro side come game time.

The zippy midfielder is as tough as they come and mixes her line-breaking speed with clearance-winning ability. Put in an exceptional Preliminary Final performance against the Knights and while she does not always accumulate the biggest numbers, Meagher can find the goals and may feature forward of centre if given an opportunity.

The reliable Cannon is one who can play a role at either end inside the arcs, rebounding well from defence and looking dangerous around goal up forward. Will be an asset at ground level and sweeps up well under the talls.

A classy ball user, Lagioia is often a joy to watch. Has all the makings of a neat outside player, employed on just about every line – with time at half-forward, half-back, and through the middle. Accumulated over 15 disposals in six of her nine games.

Another who has spent time at either end, Xenos mixes a pressure game with ball-winning well – averaging 15.4 disposals and 5.4 tackles, while breaking each arc around two times per her eight NAB League games.

The Western Jets skipper most often plays as a classic rebounding half-back, finding a high amount of ball and bringing it out of the back half with line-breaking speed. She may find a home there at the Championships, but can also move into the midfield and provide pressure around the ball while also winning it herself.

The small defender has made her mark as a pressure player, averaging almost five tackles across her nine NAB League games. Not always a high disposal winner, but disposes by foot more often than not and can rebound well.

A tackle-happy small forward who found the goals in three of her nine NAB League games for Oakleigh, including a Round 1 haul of two. Delivered the ball inside 50 at least twice in her average of just over 11 disposals, and rarely falls below double-figures.

A zippy outside player who finds plenty of the ball, making for busy work in between the arcs. Does just about everything in between delivering the ball to and from each 50, and had less than 15 disposals just twice this NAB League season.

Only featured in five NAB League games this season, but the middle-ager showed enough to warrant selection. Can go inside 50 well and averages just below a dozen disposals per game, with one of her best being a successful return effort against GWV (13 disposals, one goal).

A tough inside midfielder who compliments her fellow Calder midfield stars well with some grunt. Has played every game for the Cannons this year, and while she can fall well below 10 disposals in some games, is more than capable of collecting over 20 in others.

The 2020 Collingwood father-daughter prospect has more than shown her worth for Eastern this season, proving to be a consistent and balanced ball winner. Has class, but is not afraid to also do the hard work as well.

The durable Dragon has been a picture of consistency through the engine room, hardly straying from her average disposal count of 16.5 – with a high of 20 and a low of 13. A typical inside midfielder who also tackles hard, and wins the ball at stoppages all over the ground.

Gutknecht has adapted well to a move into the midfield, while also reminding us of her obvious forward talents when called upon – including a four-goal haul against Murray. Is a good reader of taps and attracts the ball, but may well revert back to a forward game at the championships.

McClelland can play above her height, leading up from half-forward and providing a good link to the forward 50. Only found the goals in three of her nine games, but gets involved and only fell below 10 disposals thrice.

The Knights forward is dangerous inside 50 with good goal sense and positioning. Only failed to boot a goal in one of her eight games, while claiming multiples on five occassions. Had a day out against Bendigo with 18 disposals and three goals, and is dyamic when running over the back.

The strong Oakleigh utility has played on every line this season, but looks most effective forward of centre having booted 13 goals this NAB League season – including four against Gippsland. Is a bullocking type through midfield, and her versatility could prove handy if required.

While the classy Calder leader has long been a standout, Patrikios has been in a partiularly rich vein of form at the back end of the year. Stands up in big games and has the ability to hit the scoreboard from midfield. Watch for her efficient short kicking, elite agility and speedy ball carrying throughout the championships.

Has been a regular in the Eastern midfield, with only a couple of outliers bringing her usually steady disposal average down. Only fell below 10 disposals twice, and had more than 15 on six occassions – with a 28-disposal effort against Gippsland her clear best return.

A dangerous ball winner on the outside, Purcell has made the wing her own for Sandringham. Has had one outlying game either way in an otherwise linear run of disposals, and can deliver the ball inside 50 well.

Sansonetti has thrived latter half of the season against some top opposition, holding her own in aeriel contests and with the ball in dispute. Is not the tallest key position player, so is ultra competitive at ground level and tackles hard. Likely to take the opposition’s best forward.

The dynamic middle-ager would have a decent highlight reel to date, and is so dangerous when positoned one-out at full forward. Stands out with her clean hands and composure, and seems to always be thereabouts. Arguably as damaging as any player to take the field at the championships.

Another middle-ager who is sure to play a key part for Metro. Hartwig is a terrific overhead marker and has played in key positions at either end, but looks more comfortable down back. Is a composed user from defence to boot and is one to keep an eye on.

Has been enormous for the Knights at times this year, and found the goals in six of her last seven games. Dragged her side over the line with four Preliminary Final goals last week and looks to be coming into form at the right time. Usually efficient inside 50 on her left boot, and brings others into the game.

The Bulldogs father-daughter prospect only featured in six games this season, but proved her worth in the forward half and through midfield. Marks well and can find the ball at will, with her best game a 25-disposal, five-mark effort against GWV. Can penetrate both arcs.

Merrett has proven to be a useful outlet at both ends, while also contesting in the ruck when called upon. Is not a huge disposal-getter but plays whichever role is asked of her and has plenty of upside on the back of her versatility.

Right up there with the best of the best, Newton will be a key player for Metro. Has played almost exclusively in the midfield this year but has the hops to ruck and also moves forward well, while playing a key role behind the ball with her overhead marking. Is composed in possession and finds it with ease, with her leadership qualities also evident.

Has not been a huge year for the Sandringham product over her five NAB League games, but she is a ruck who can win the hitouts and follow up with hard tackles at ground level. Not a high disposal winner, but makes her presence felt and can also spend time forward.

Collects her fair share of ball as a taller prospect, not falling below 10 touches across her seven games. Does not drop many marks and provides safe rebound out of the back half, so could be part of a solid Metro back six as a middle-ager.

A physical centre half-forward, Saxon-Jones finds her way up the ground well to impact the contest and provide a link into the forward half. Has a knack for taking strong contested marks and may even pinch-hit in the ruck.

The only over-ager prospect on the Metro list, Peck has earned her spot as a standout ruck. Averages almost 12 hitouts per game and just under 10 disposals, while also being able to move forward when required having at least scored in three games.