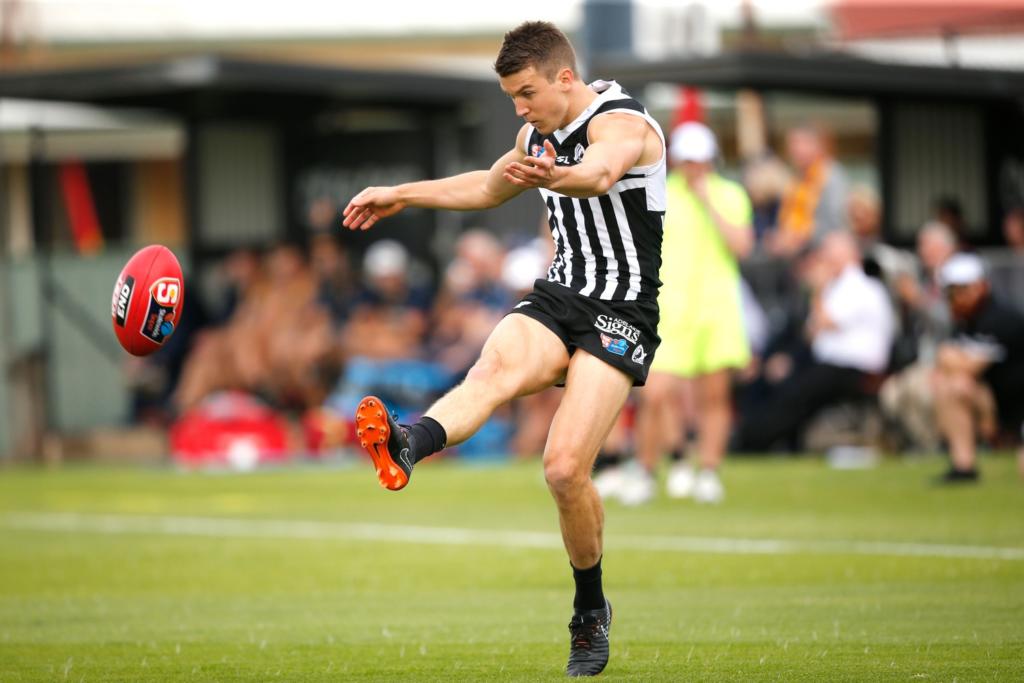 SOUTH Australia’s talented youngsters were back into full swing last week with a full round of South Australian National Football League (SANFL) and College games to get into. The addition of the mid-season draft as well has added more focus to those in SANFL League sides and looking for an opportunity at AFL level. Jamie Morgan, Tom Wyman and Damon Mattiazzo all took a look at what has been happening in the SANFL.

Glenelg’s reserves side secured an unexpected first win of the season over top placed Centrals in a sold win. Experienced players helped the Tigers, along with U18 SA members Declan Carmody with 26 disposals and two goals, along with Brady Searle who finished with eight marks secure the win away from home. Centrals’ Oliver Shaw was good for the Bulldogs with 15 disposals in the losing side.

Under-18 Glenelg talent Reid Kuller was rewarded with an Under 18s Most Valuable Player (MVP) nomination after a huge game with 32 disposals, six tackles and 10 clearances to be best afield.

Sturt has continued its resurgence and find themselves back in the top five after an impressive away against West Adelaide. They were led by captain Zane Kirkwood who had a best-on-ground performance with 35 disposals and six clearances. Sam Colquhoun – nominee for the Mid-Season Rookie Draft- was prolific once more recording 33 disposals and 10 marks across the half back line and wing. Midfield bulls and former Crows James Battersby and Aidan Riley were dominant throughout gathering 29 and 23 disposals respectively. Rookie Draft nominee Josh Hone kicked two goals and is starting to find his rhythm in the senior side after an early season layoff with fellow nominee and former SA U18 forward Hugo Munn struggling to make an impact with only three touches for the game. For West Adelaide, former Power-listed player Will Snelling is continuing his wonderful season so far with another 33 touches and 16 tackles. Former Crow Jono Beech kicked another four goals for the third week running, as Rookie Draft nominee John Noble was solid contributing with 16 disposals.

It was a tight win for the Blues, and again their young players Josh Shute with 28 disposals and 11 marks along with Jed McEntee 18 disposals and eight tackles led the way.

An inspired display from co-captain Joel Cross and a four goal breakout game from Kyle Emery sealed a comfortable victory away to premiers North Adelaide. All eyes were on in-demand ruckman and Fos Williams medallist Michael Knoll, contributing 38 hit-outs and 10 disposals, backing up his best on ground performance in the State game. Mid-Season Rookie-Draft nominee and state representative Joe Haines had another superb outing with 28 disposals and 10 rebound 50s for the Panthers. South leaders Nick Liddle gathered 31 disposals and five clearances, as co-captain Matt Rose contributed 25 disposals and six inside 50s. Liam Fitt and former U18 South Australian championship winner Hayden Sampson were solid with 17 and 14 disposals respectively. North Adelaide continued their struggles so far this season, but were aided by Jarred Allmond who racked up 30 disposals with 11 marks. Midfield duo Tom Schwarz and Aidan Tropiano dug deep, with 25 and 24 disposals respectively for the Roosters. U18 talent Dyson Hilder featured with nine disposals and will be better for the opportunity at senior level.

North dominated the Reserves game in a massive win, with goal sneak Liam Verity finishing with another five goals for the Roosters, while Coby Helyar and Luke Bogle were best for South. South U18 forward Daniel Sladojevic finished with 0.4 on the day while fellow SA member Darnell Tucker had one goal in the big loss

It was a clean sweep for the Eagles over Norwood, and a consistent team effort for Sam Lonergan’s Eagles side in securing their win over the league-leaders. The Eagles midfielders in Jordan Foote and Jesse Lonergan stood up along with ruckman Jarrad Redden. Norwood youngster Cam Taheny was amongst Norwood’s best and was very good at the highest level finishing with three goals, seven marks and 13 disposals, while Dylan Stephens was solid as well with 17 disposals. It was an important win for the Eagles league side who have taken time to settle in season 2019.

In the Reserves win by the Eagles, Jake Comitogianni continued his good form for the season finishing with 27 disposals and a goal and U18 SA member Jackson Mead just backs up again with another solid reliable game of 26 disposals and five clearances.

Sacred Heart welcomed back state representative Will Day with open arms in a big win over Pembroke on Saturday afternoon. The talented utility showed glimpses of his potential playing across half-back. Fellow SA squad member Zac Dumesny was consistent throughout the four-quarters, whilst full-forward Lachie Stoddard again proved a handful. The side will look to make it four from four against arch-rivals Rostrevor next weekend.

Standout performance from PAC draft talent and captain Karl Finlay along with future prospect James Borlase (son of Daryl) were highlights for PAC on the weekend. Rostrevor was without its big names in Taheny and Anzac Lochowiak.
Both Sacred Heart and Rostrevor meet as undefeated this week, but will be a close tussle with some of their stars missing due to SA state commitments.