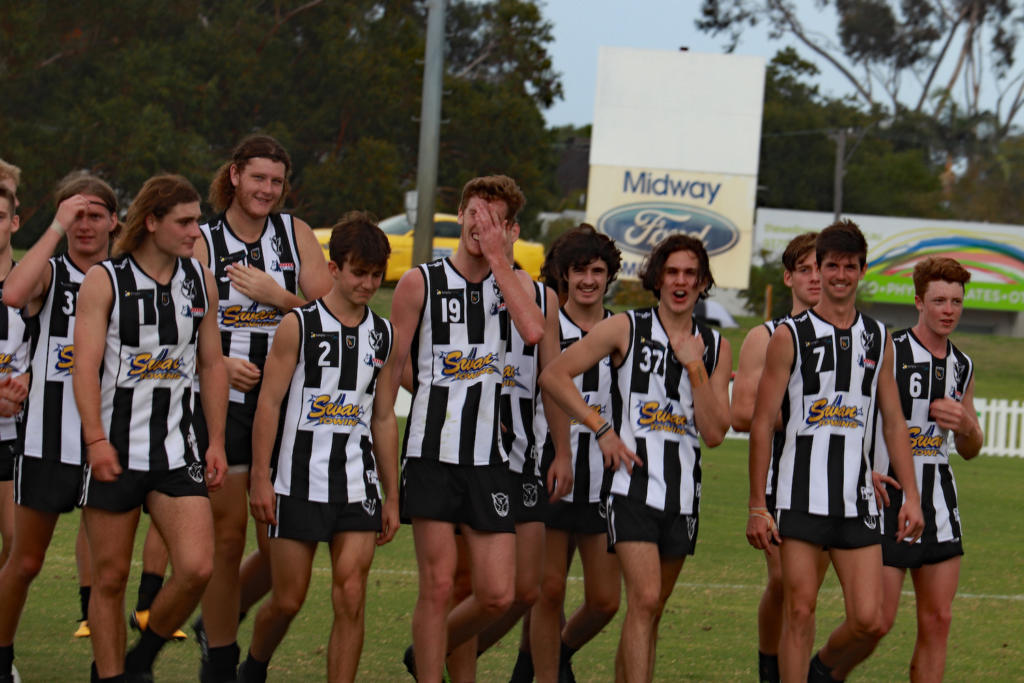 AFTER a bye for the state game, the youngsters were greeted with a taste of winter chill with the temperatures around five degrees at bounce-down on Saturday morning. Which teams did not miss a beat on their return to competitive action and who slipped up?

Read on to find out.

Swan Districts confirmed its status as the team to beat in the 2019 WAFL Colts competition as it ruthlessly disposed of East Fremantle to the tune of 66 points at Steel Blue Oval on Saturday morning.

The top of the table side made a dominant start to proceedings with nine inside 50s and five scoring shots inside the first fifteen minutes. The Sharks were lucky to be down by no more than 22 points at quarter time, such was the performance of the Black and Whites. That pattern continued in the second term with Atem Deng proving a lively focal point with two first half goals. It was slim pickings for East Fremantle’s forwards but Tyrone Papertalk was able to make his only disposal for the first half count kicking the Sharks’ first goal of the game. Swan Districts had close to fifty more possessions than their opponents during the first two quarters and restricted the Sharks to just seven inside 50s, which was a terrific effort.

Swans were firmly in control of proceedings in the third term and while not as fluent in an attacking sense, were still keeping their opponents completely at bay. A late goal by Ryan Letessier pushed the lead beyond eight goals and the premiership favourites were set for another boost to their already impressive percentage.

East Fremantle started to show some life in an attacking sense during the final quarter with Michael Wright kicking two goals in quick succession. However, Swan Districts responded in kind through Ashley Brockbernd, Bodhi Nordahl and Kade Wallrodt to regain their eight goal margin. Benjamin Taylor then kicked two goals in three minutes and Walldrot pushed the lead beyond eleven goals, putting an exclamation point on their most complete performance of the season. The dominance of Swan Districts was not only seen on the scoreboard as they had 103 more disposals (328-225), marks (73-46) and inside 50s (46-25). They also had a even number of contributors across the board.

Walldrot, just like he is most weeks, was at the forefront with 28 disposals, seven inside 50s, five tackles and three goals. Ruck-forward Letessier had impact all over the ground with 18-hit-outs to go with 15 disposals and two goals while Denver Grainger-Barras marshalled the back six superbly with 11 disposals and three marks. For the Sharks, Wright was a tireless worker throughout the four quarters with 23 disposals and nine tackles.

The Tigers’ defensive unit stood strong withstanding 14 inside 50s by Peel to lead by eight points at quarter time. However, the weight of numbers eventually told in the second term with Peel scoring four goals to one to lead by 13 points at the long break. Peel were certainly outworking their opponents with pressure around the ground, amassing 17 more tackles (51-34) and their midfield gave the forwards consistent opportunities with 26 inside 50s to just 11 by the Tigers.

Killian Rawson gave Peel their biggest lead of the game of 19 points, and they extended it soon after when Kyle Penny kicked his first goal of the game. Like they had done all game, the Tigers hung tough and went into three-quarter time still a chance, trailing by 18 points. A early goal by Jonathon Ietto seemed to ease any nerves in the Thunder camp, however the Tigers came storming back by kicking four goals in five minutes to suddenly level the scores at 8.7 a piece and suddenly it was game on again.

Luke Knight then gave Claremont their first lead since the second quarter when he kicked his second for the game. The mobile ruck-forward then kicked his second of the final term to complete a remarkable and stirring fight back as the Tigers recorded their second win of the season. Meanwhile, Peel fell one game behind Swan Districts at the top of the ladder.

WA Under 18 squad member Ronin O’Connor was a tireless worker with 10 tackles, six inside 50s to go along with 15 disposals, while ruck-forward Luke Knight was influential with the game on the line amassing 18 hit-outs, 11 disposals and three goals. Thomas Baldwin also was a fine contributor with 22 disposals and six tackles.

Peel will look back at this game as a major opportunity lost having been in control of the contest for a large part of the game. Zachary Rankin was the best for the Thunder with 22 disposals and six inside 50 while bottom ager Jonathon Ietto was a real presence in and around the forward 50 with two goals and 18 disposals.

Reigning premiers Subiaco finally got off the mark for season 2019 with a 12-point victory over fellow strugglers South Fremantle at Leederville Oval on Saturday morning.

South Fremantle scored the only goal of the first quarter through Toby McQuilkin with the Lions held scoreless. The Lions edged back into the contest in the second quarter by kicking three goals to one and only trailed by two points at the long break. Ben Golding and Abraham Clinch were catalysts for the impressive reversal in fortunes combining for 43 disposals while Chayse Grabe-Paparone kicked two goals in the second term.

In this low-scoring, tight affair, goals were worth their weight in gold. The home team kicked three goals to one in the third term courtesy of 16-year-old Matthew Johnson, Golding and Trey Kennedy to push the lead out to 12 points with one quarter to play. In keeping with the pattern of the contest, the last term was tense and tight with both sides looking to claim the victory which could kick start their season. Each team could only muster one goal each in the final 25 minutes but that was more than enough for Subiaco as they outlasted their gallant opponents.

Subiaco had close to 400 disposals for the game with one player ticking over the 40 mark and three players who fell just short, a rare feat indeed. Abraham Clinch collected 43 disposals and six tackles, Ben Golding was elite with 39 disposals, six inside 50s, five tackles and one goal, Noah Ash had 38 disposals and eight marks while Jacob Peletier had 38 and 10 tackles. The individual stats weren’t as eye watering on the South Fremantle side of things, but Jack Musika was impactful in his own way with 26 disposals and six marks.

West Perth remains on the heels of the the top two after recording its fourth win for the season, defeating Perth by 24 points at Mineral Resources Park.

West Perth was well worth its 13-point lead at quarter time and the visitors were able to spread the load with four individual goalkickers in the first 25 minutes. Perth responded in the second quarter kicking three goals to one and trailing only by one point at the long break.

The Falcons, who were trying to keep pace with the top two set up their victory in the third term kicking four goals to three behinds to head for home with a 24 point lead. Each team kicked three goals in the final quarter and while the Demons narrowed the gap to 12 points with seven minutes remaining, bottom age talents Cooper Blackburn and Corey Rundle finished off the job and moved the Falcons to within half a game of Peel Thunder in second place.

The Falcons were tireless in their pressure efforts with 80 tackles and Callum Johnson led the way with nine tackles to go along with 24 disposals, five inside 50s and three marks. Tyron Hindmarsh topped the disposal charts with 33 and four tackles while Cooper Blackburn was very lively with 15 disposals, seven inside 50s, seven marks and two goals. For the Demons, Simon Hayward was prominent with 31 disposals, seven tackles and four inside 50s.