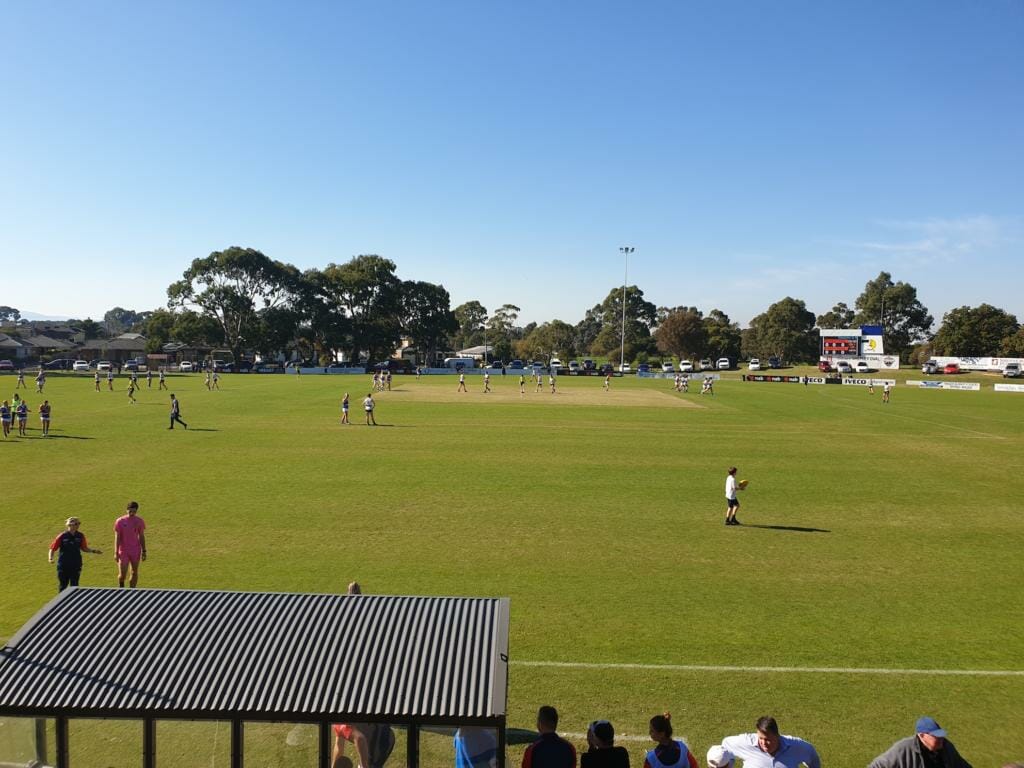 THE NAB League season finale is set, with the unbeaten Northern Knights qualifying first, and the Calder Cannons securing their spot with a massive upset win over reigning premiers, Geelong at Shepley Oval on Saturday.

Northern Knights became the first team to qualify for the 2019 NAB League Grand Final, but were made to work for it by the Eastern Ranges in a tense Preliminary Final at Shepley Oval. The sides went goal for goal in the opening term after Northern middle-ager Ellie McKenzie snapped truly to first trouble the scorers. The Knights looked like breaking away in the second stanza as Maykaylah Appleby backed up Nell Morris-Dalton‘s second goal with another major, but the Ranges would hit back with two goals of their own through midfield stars Tess Flintoff and Olivia Meagher to trail by just three points at half time. When Madeline Di Cosmo kicked the Ranges’ third-straight goal to snatch the lead at the start of the third term, an upset loomed large – right up until Morris-Dalton had her say. Two quick goals from the Knights’ forward saw Northern reclaim the lead, and an Alyssa Bannan goal ensured they would go into the final break with a 15-point buffer. Despite a late Eastern charge with two goals to nil over the quarter, and the margin cut to six points with over two minutes left, the Knights held on to remain undefeated and scrape into a second-straight Grand Final. McKenzie was outstanding in the closing stages for the winners, thrown into the midfield and contributing some vital touches when the heat was on. Her midfield partner and skipper, Gabby Newton also played a big hand, while the goals of Morris-Dalton ultimately proved the difference. Sarah Sansonetti had her hands full down back but stood tall, with Maeve Chaplin another defender to be named amongst the best. Meagher led the charge through midfield for the combative Eastern side, with Flintoff proving her partner in crime. The likes of Serena Gibbs and Tahlia Merrett caused headaches with their height and versatility, while Di Cosmo provided the scoring pressure with her two majors. Eastern showed plenty of promise and really took it to Northern at times when other sides could have given in, but the Knights proved too strong and rightly cemented their spot in the competition decider.

The Calder Cannons saved arguably their best performance for just the right occasion, scoring one of the upsets of the season as they toppled Geelong Falcons by 35 points to book a spot in the Grand Final. The underdogs came out hard, pouring the pressure on Geelong and hitting the scoreboard early to open up a three-goal quarter time lead. In a similar fashion to how their game against Northern went, the Falcons came out hard in the second term and looked to mount a comeback as Mia Skinner bagged their first goal. But when Georgie Prespakis nailed a set shot in reply, it looked more and more unlikely with the Cannons taking a 19-point lead into the main break. A Zoe Hardiman goal in the opening two minutes of the third stanza all but put the result beyond doubt, as the Cannons kept their foot on the gas with unrelenting pressure to keep the game locked up, and Geelong goalless for another quarter. Two more goals in the final term, including Hardiman’s second, cemented the win as the Falcons again could only manage a behind, with the Calder crowd in raptures on the back of their side’s big-time display. Bottom-agers Emelia Yassir and Kasey Lennox played out of their skin at either end, while fellow ’03 birth Prespakis was again phenomenal with every touch of the ball. Georgia Patrikios led the Cannons from the front with her mix of flair and toughness, with fellow midfielder Alana Barba starting well to find the goals and Alisa Magri joining Hardiman with two goals. Skinner finished as Geelong’s sole goal kicker, while skipper Lucy McEvoy a beacon of light in the tough loss through midfield and in the ruck. Abbey Chapman provided a calm head in the beaten Falcons back six, with fellow defender Liz Dowling standing up as an impressive bottom-ager alongside Poppy Schapp. Renee Tierney spent time on each line to good effect, with Luka Lesosky-Hay putting in her usual combative shift. The loss saw Geelong end its season with just one win from their last three tries after previously going unbeaten in their premiership defence, and it would be a hard one to take given they had beaten Calder just three weeks ago. Meanwhile, the Cannons look to be peaking at the right time and move on to the decider, sure to give Northern a hell of a test if this game is anything to go by.