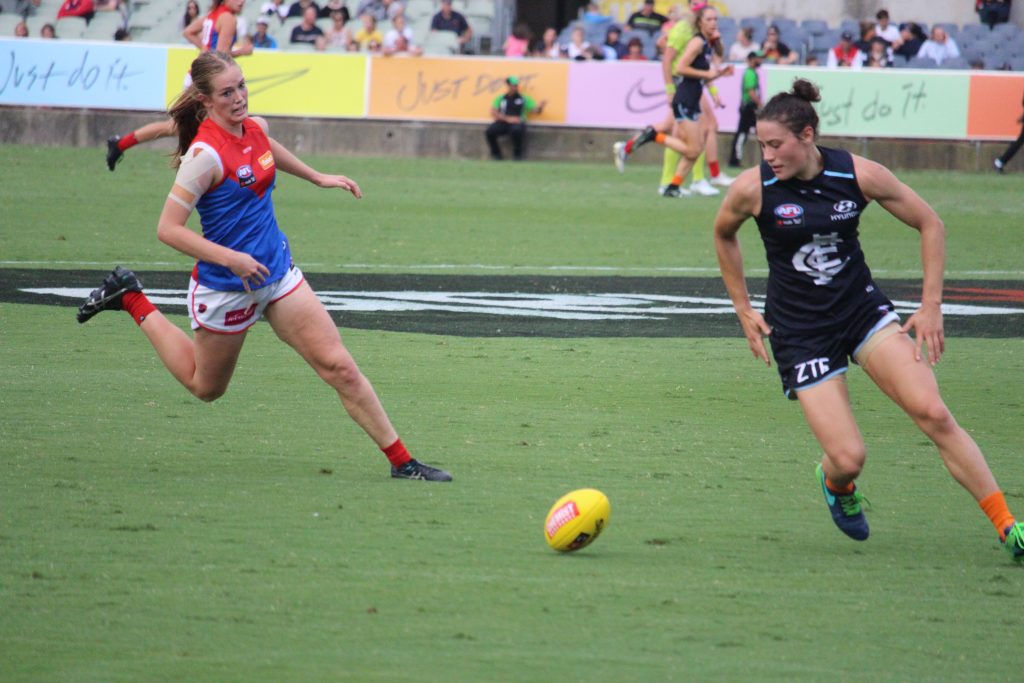 CARLTON, Western Bulldogs and Williamstown all begin their campaigns this week coming off byes, while Richmond has a break from the VFL Women’s competition to test themselves against GWS GIANTS in an invitational match. With plenty of entertaining contests across the weekend, expect some great clashes.

In the opening game down at Casey Fields, Carlton comes into the 2019 VFL Women’s season for the first time, meeting a relieved Casey Demons outfit who just got over the top of last year’s wooden spooners Essendon last week. Maddy Guerin played her best game in the red and blue with three goals, while Bianca Jakobsson booted two, in the five-goal all game. Key forward Eden Zanker was named best for the Demons in the win, while former Dog Libby Birch was prolific.  The Blues have a number of Carlton AFL Women’s players in their side with the likes of Sarah Hosking, Emerson Woods, Abbie McKay, Charlotte Wilson and Nicola Stevens among those included in the side for the clash tomorrow morning. The Demons deservedly go in as favourites with some more AFLW experience, especially with Birch and Jakobsson in the side, and at home will be home to play well and make it two consecutive victories. For Carlton, it has a young side and will be keen to try and start the season off on the right note and build on its AFLW form.

Heading out west, Geelong will be licking its wounds after a 44-point defeat at the hands of a rampaging Melbourne University side, while Essendon will rue a narrow loss against Casey. Young talent Denby Taylor, and the experienced Bec Goring have been brought into the team to change fortunes given the team is relatively settled from the AFLW and last year’s VFLW side. Falcons premiership players, Taylor, Tarryn Love, Zoe Inei and Sachi DeGiacomi are all named in the team, with fellow former TAC Cup players, Georgia Clarke and Rebecca Webster also in the side showing their youth. Essendon has former Calder Cannon, Molly Warbuton and former Murray Bushranger, Eloise Ashley-Cooper in a side that does not have a great deal of AFLW talent outside of West Coast’s Maddy Collier, but has good team cohesion and took it right up to Casey last week. The other AFLW listed player, Maighan Fogas has the unique opportunity to play against her AFLW teammaes in the match. While Geelong got a shock to the system last week, they are still one of the teams to beat this season, although Essendon will put up a fight in this game.

Last year’s semi finalists both suffered losses in Round 1, with Collingwood having a shock loss at the hands of Southern Saints in the standalone game a fortnight ago, while the Hawks lost to Northern Territory Thunder, the side it booted out of last year’s finals series. Collingwood has recalled a host of AFLW talent including last year’s draftees, Jordyn Allen, Katie Lynch and Georgia Gourlay and key position players Sophie Livingston and Sophie Alexander who will straighten the side up. Add in Ruby Schleicher and Maddie Shevlin and the Magpies team on paper looks considerably more experienced than Round 1. The reigning premiers have backed themselves in with just the one confirmed change in the side this round. It means Collingwood will go in as favourites and keen to atone for the semi-final loss, but one can never discount the strength of the Hawthorn squad and what it is capable of under coach Patrick Hill.

Both these teams come into the game in winning form, with NT Thunder overcoming Hawthorn and Southern Saints giving Collingwood a touch-up in the opening round of the season. The Thunder bring in the likes of Danielle Ponter and Hannah Martin, the latter of whom has enjoyed a good season for West Adelaide in the SANFL Women’s competition. The Thunder have lost a number of experienced players with Chelsea Randall, Angela Foley and Deni Varnhagen among some very experienced outs, while the Saints have made minimal changes to their side with just bringing in four players to the squad and four emergencies. NT Thunder are one of the teams to beat this season and it is expected at home they take the points in this one, but the Saints have plenty of exciting youngsters that are coming through, such as Caitlin Greiser who crossed from Melbourne University and booted two goals last round, and former AFL Women’s Academy member, Courtney Jones. The Thunder are favourites, but the Saints will be hoping to make it a tight contest.

Neither of these sides took part in Round 1 and therefore have a clean slate heading into this Round 2 contest. Williamstown look likely to struggle this season after the off-season losses, while the Western Bulldogs have also lost some big names. The Seagulls’ combination of Mo Hope and Aliesha Newman, two players who have the X-factor and bring plenty of excitement to the team and crowd. While Newman is the only currently listed AFLW player, the Seagulls also have the likes of former Bendigo Pioneers skipper Megan Williamson and Western Jet, Ruby Tripodi, the latter of who is making her debut in the game. The Western Bulldogs have a good core of AFLW players in their team, and will look to Bonnie Toogood – who has been named in defence, alongside Hayley Wildes and Naomi Ferres. First round pick last year, Eleanor Brown has also been named in the Bulldogs’ midfield. The Bulldogs will be favourites, but this is a game the Seagulls can win.

These two sides come into the match with differing Round 1 results, after Melbourne Uni knocked off Geelong in a 44-point win, while Darebin fell to Richmond by 35 points. Holly Whitford, Ash Riddell and Jessica Trent are among the ins for the Mugars, while Melbourne AFLW ruck, Lauren Pearce comes in as a crucial inclusion for the Falcons against a side that is missing Emma King. Kate Gillespie-Jones will step up to the role and make it an entertraining contest, and with the likes of Jenna Bruton and Jasmine Garner in the midfield, the Mugars will be strong favourites in this clash. Darebin do not quite have the AFLW depth to match it with a premiership contender, but will be hoping the youth in the side such as former Eastern Ranges’ defender, Lauren Szigeti and former Kangaroo Jamie Stanton can have an impact. Stanton is playing against her former side and will be keen to prove a point in this game. Melbourne Uni should win this game with the firepower they have.