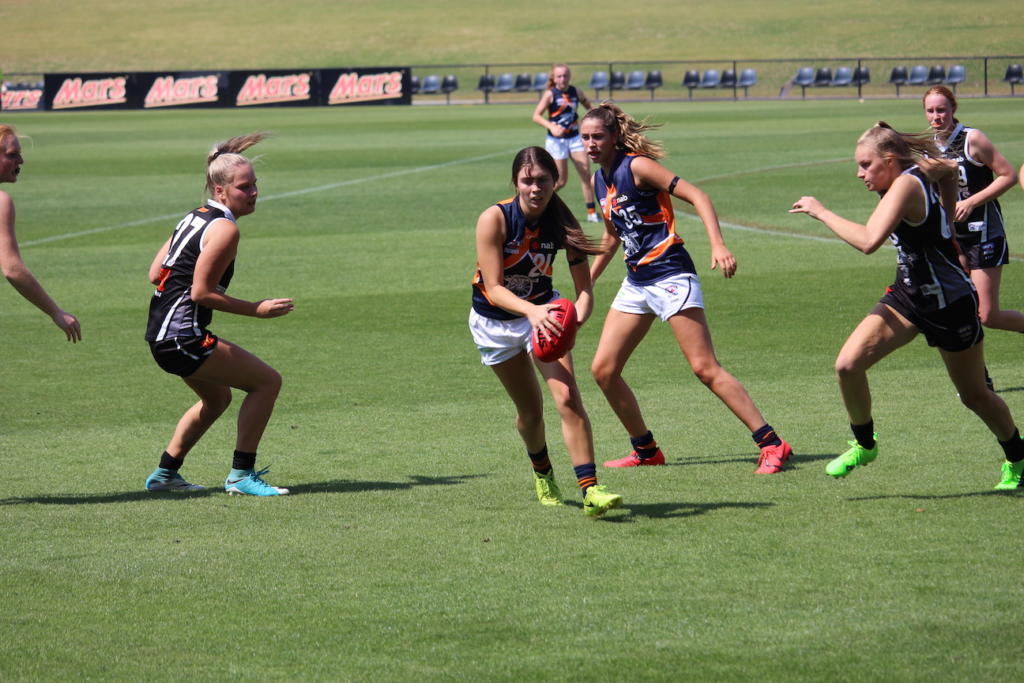 FINALS fever hits the NAB League Girls competition, with a revamped finals series set to get underway at Shepley Oval on Saturday. A spot in the grand final is on the line in both games as first does battle with fourth, and second plays third. In the weekend’s other game, Oakleigh hosts Tasmania at Windy Hill in a one-off exhibition.

The undefeated Knights came into the year as strong premiership fancies, and firmed as favourites with their 36-point Round 8 win over reigning premiers, Geelong – avenging their 2018 grand final defeat and snapping the Falcons’ two-year winning run in one fell swoop. The only hiccup in Northern’s season thus far was a Round 2 draw with Oakleigh, with the best attack in the league and a raft of stars helping them ease to eight wins – including ones over two fellow finals sides. They are only one step away from a second-consecutive grand final berth, but an exciting Eastern team stands in the way. The Ranges are one of the best marking sides in the competition, and can compete with most teams on their day, but suffered a couple of disappointing losses to lower-ranked sides and had a close encounter with Tasmania in Round 7. Their narrow margins of victory and defeat – including three wins by under a goal – make for heart-stopping games, but their more convincing wins like their 51-point one over Gippsland show why they are always a chance. Eastern’s prime movers in the middle include potential 2020 Collingwood father-daughter selection Tarni Brown, as well as gun bottom-ager Tess Flintoff, and Olivia Meagher, but their most potent threats will come through the tall duo of Laura McClelland and Serena Gibbs forward of centre. Northern key back Sarah Sansonetti has been in terrific in recent weeks, and could well find herself playing on both of those Ranges talls throughout the game. While her role will prove vital, if the likes of Gabby Newton, Britney Gutknecht, and Ellie McKenzie are thrown into the middle at the same time as we have seen recently, it may be tough for the Ranges to venture forward in the first place. The versatility of those three will make a huge difference, and one would think the range of Knights weapons could well prove too much as it did in the side’s previous meeting. With Northern getting one back on Geelong two weeks ago to come in as the top seed, and Eastern suffering a defeat in their final regular season outing, this will be a tough mountain to climb for the Ranges.

The Northern skipper has been sensational throughout the year, averaging almost 20 disposals over her eight NAB League games. Much has already been made of her basketball background, with the gun midfielder showing off her hops in the ruck at times and her equally impressive composure in traffic to no end. While her starting position will most likely be at the centre bounces, Newton’s role as a general behind the ball will be key in this clash – with a potent Eastern tall duo likely to line up down forward. Her intercept marking and overall overhead prowess is profound, so look for that to be a feature in this game along with her consistent ball-winning ability – with over 20 disposals in five games this year. Versatile and damaging, Newton is key.

Gibbs is one of three Eastern talls who pose an enormous risk to the Northern defence, often trading time between centre half-forward and the ruck. If she is matched up on Northern’s Sarah Sansonetti, the clash becomes one of the more important ones for the game with the likes of Laura McClelland and Tahlia Merrett also able to be freed up should they play forward at the same time. Gibbs has found the goals in seven of her nine NAB League appearances, led by a dominant 3.4 from 18 disposals against Gippsland in Round 8. While her Round 9 return saw her collect under 10 disposals for just the third time, Gibbs has been a consistently dangerous threat and will be a key focal point this time around.

The Geelong Falcons bounced back well from their Round 8 loss to Northern – their first since May 2017 – to secure second place with a welcome return to form, toppling Murray by 48 points after conceding the first goal. Their depth across all lines is scary good, but their premiership defence has largely been built on a typically sturdy back six and dominant midfield, with their forward structure taking greater shape across the year. Abbey Chapman has led the league’s stingiest defence all year, with the Falcons’ highest score conceded (43) coming against Northern, while the likes of skipper Lucy McEvoy, Paige Sheppard, and Luka Lesosky-Hay have been instrumental in the engine room. Pair the inside grunt of those three with the outside class of Laura Gardiner and Darcy Moloney on either wing, and you have a midfield that is hard to beat to say the least. Mia Skinner has been the spearhead forward of centre, booting a league-high 18 goals – including two bags of four – having only been held goalless on two occasions, in Rounds 7 and 8. The Cannons have some firepower of their own, which more often than not comes from star duo, Georgia Patrikios and Georgie Prespakis. Both have the ability to not only find a wealth of the ball through the middle, but to also find the goals – exemplified by Prespakis’ bag of seven in Round 2 from full forward. Prespakis, the sister of Carlton star Maddie, has averaged 23.3 disposals over her eight games with two returns of over 30 touches, while Patrikios averages just over 22 in her seven outings, and the pair should provide a dynamism that Geelong will have to pay great attention to. Include talls at either end, such as the likes of Alana Barba up forward and Krstel Petrevski, along with Makeisha Muller at ground level, and there are some interesting moving parts to the Calder line-up. Having already gotten the better of Calder as recently as in Round 7, Geelong will be confident of repeating the feat and storming into another grand final. If Calder can again keep the Falcons to under four goals though, then anything can happen. Expect fireworks either way.

Able to be utilised on each line, the Falcons skipper is arguably her side’s most important player. An ultra-consistent force, McEvoy has only dropped below 20 disposals once in her eight games – incidentally in the Falcons’ only loss – to average 22.2 disposals per outing. Her presence at the centre bounces in undeniable, using her size to prize the ball out and her composure to flick out effective handballs to receivers. In general play, McEvoy utilises a booming kick to rebound and enter either arc, while positioning herself a kick behind the play to act as an impenetrable wall at both ends. Her overhead marking is a feature, but expect to see her mostly in the thick of the midfield action given Calder’s strength in that area.

Patrikios is all but equal to McEvoy in her disposal output, but provides a different kind of threat from midfield. Having shown how damaging she can be on the outside during her bottom-age year, Patrikios has developed into a balanced midfielder very quickly, but is still often seen bursting away from congestion and delivering forward with aplomb. The Cannons star’s best game came in Round 7 against the Falcons, collecting 31 disposals and finding the goals, so she will hope to produce more of the same here. With the strength of Geelong’s midfield obvious, Patrikios’ point of difference in her pace will be key amidst that battle.

OAKLEIGH CHARGERS vs. TASMANIA DEVILS
Sunday May 19, 11:00am
Windy Hill

Oakleigh hosts Tasmania on neutral ground for a one-off friendly game, completing a hat-trick of Devils NAB League appearances. With Oakleigh narrowly missing finals, this game poises the travelling side against the best of the rest as finals gets underway, and will be a third opportunity for them to pick up a win in the competition. Tasmania entered in Round 7 with two games over three days, going down to Western by 37 points under Friday night lights, and giving Eastern a mighty scare just two days later. Oakleigh will be keen to finish off the season with another win to make it six all up, but the Devils showed their fighting spirit already and should provide a good test for the Chargers. The game will also be a curtain raiser for the NAB League boys clash between Gippsland and Greater Western Victoria at 1:00.