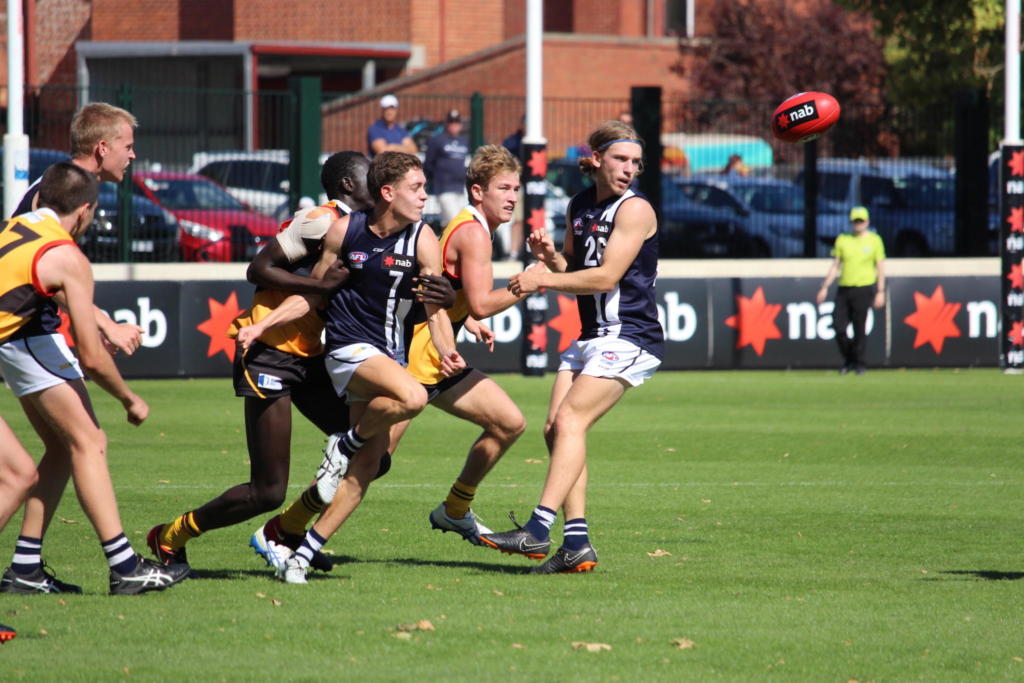 NAB LEAGUE teams are preparing for a huge day of action, with five of Round 8’s six games set to be played on Saturday. Despite only one top eight clash taking place, the remaining fixtures pose as a chance for the top sides to stamp their authority.

NORTHERN KNIGHTS vs. OAKLEIGH CHARGERS
Saturday May 18, 10:00am
Shepley Oval

A fourth consecutive win is on the line for the Northern Knights when they host Oakleigh Chargers on neutral territory. While the Knights are on a hot run after losing their first four games, the depleted Chargers scraped over the line against Tasmania in Round 6 on the back of three-straight losses, but will be refreshed after a bye round. That sees the visitors come in relatively unchanged despite star duo Matt Rowell and Noah Anderson having the week free of school football commitments with Carey Grammar, while Northern has made at least six changes. The tall Knights trio of Ben Major, Nathan Howard, and Nikolas Cox comes out of the side, with bottom-agers Rhys Seakins and Joel Trudgeon, and over-ager Bailey Leonard amongst the inclusions on an extended bench. While the ninth against tenth match-up may not set the world alight on paper, the almost opposite form of both teams and closeness of the match-ups should make this a tight one.

A chance to separate from the remaining top eight pack and consolidate a top four spot looms for Sandringham Dragons when they travel to face Bendigo Pioneers in Echuca. The Dragons suffered a rare loss against fellow top four hopefuls, Eastern last time out, but have otherwise been dominant in their four wins to hold a league-best percentage of 174.30. After winning their first two games, the Pioneers have gone on a four-game slide since – despite finding themselves in winning positions in recent two and five point losses to Tasmania and Northern respectively. The hosts have made four changes to last week’s side with the likes of Brady Rowles and Ethan Roberts coming out, with Sandringham making the same amount of rotations. Jai Florent, brother of Sydney’s Oliver, is one of three Dragons to come straight back into the starting 22, with their tall ruck-forward trio of Riley Bowman, Jack Bell, and Andrew Courtney all named and primed to prove a handful. Both sides will be keen to bounce back off tough losses, so onlookers should be in for a hot start.

Murray Bushrangers will be hoping to start an ascent up the NAB League ladder with what would be a second-straight win when they do battle with Calder Cannons on home turf. Both sides have won one of their last two games, with Murray very unlucky not to have come away with more victories to this point. Calder has shown improvement after a poor start to put three wins on the board, but holds the lowest percentage of all established sides with 67.5. Last week’s 51-point loss to Gippsland was not a great indicator of their otherwise promising form, with a solid string of over-agers and in-form top-agers leading their cause. The Cannons have made two changes to last week’s side, while Murray has brought in three fresh faces on an extended bench, with Tom Bracher named as 23rd man. The Bushrangers’ own over-agers in the form of Ben Kelly and Zane Barzen are hitting their straps, and give great value to the side led again by top prospect, Lachlan Ash. They will all make it tough for Calder to get up here on its travels, but do not expect them give it up easily.

Both the Geelong Falcons and Western Jets will be looking to return to the winners list when they do battle at Avalon Airport Oval on Saturday afternoon. A host of red time goals cost the Falcons a second win last week as they were accounted for by Murray, but they have been competitive in most of their four losses and of course, their draw with Dandenong. Western sit just inside the top eight as one of five sides with three wins, but fell well short in Round 7 against a strong Dandenong side on the back of a bye week. The Jets have made six changes on the back of the loss, with the likes of Josh Kellett and Cassius White amongst the outs. Much in the same vein, Geelong has five outs but replenishes its tall stocks with the likes of Harry Stubbings, Sam Christensen, and Charlie Sprague all named as Henry Walsh and Lochie Hocking come out. Western have double the ladder points, but will be tested well by this persistent Geelong side, so expect a tight tussle and for the Falcons to come out strong.

The sole top eight fixture for the round hits Tasmania as the seventh-placed Devils host ladder-leaders, Dandenong in Saturday’s final game. The Stingrays have had three-consecutive wins between 63 and 71 points after their Round 3 draw with Geelong, seeing them boast the only undefeated record in the competition after seven rounds. The 3-3 Devils have done well to hold an even record, with their most recent set of four points coming last week in a match decided after the siren. They will be boosted massively by the returns of top prospect Mitch O’Neill and over-ager Matt McGuiness, with Will Harper named as 23rd man in a talented team. Dandenong has also shuffled the starting lineup, with the in-form Ned Cahill a key out, while over-ager Jai Nanscawen has been named at half-back after a week off. Tasmania will have their work cut out for them against a Dandenong side building a strong premiership defence, but the Devils are not a team to go down easily – especially on home turf.

Country sides are set to play off at a Metro venue in Sunday’s lone fixture, with Gippsland Power and the Greater Western Victoria Rebels poised to meet at Windy Hill to see out the round. The Power have surged into the top four on the back of four-consecutive wins, with their only loss coming to the undefeated Dandenong Stingrays in what has been a strong start to the season. Meanwhile, the Rebels have managed two wins in an indifferent start, but had only lost by a combined total of 21 points before last week’s 32-point loss to Northern. The performance of Jay Rantall was a massive plus to come out of that game, and he will be key to the Rebels’ chances against a stacked Power midfield. Both sides are set to make at least three changes with extended benches named, but should come in reasonably steady. GWV will be keen to prove themselves once again against top opposition having tested Dandenong in Round 1, while Gippsland will see the game as a chance to continue its solid run of form.