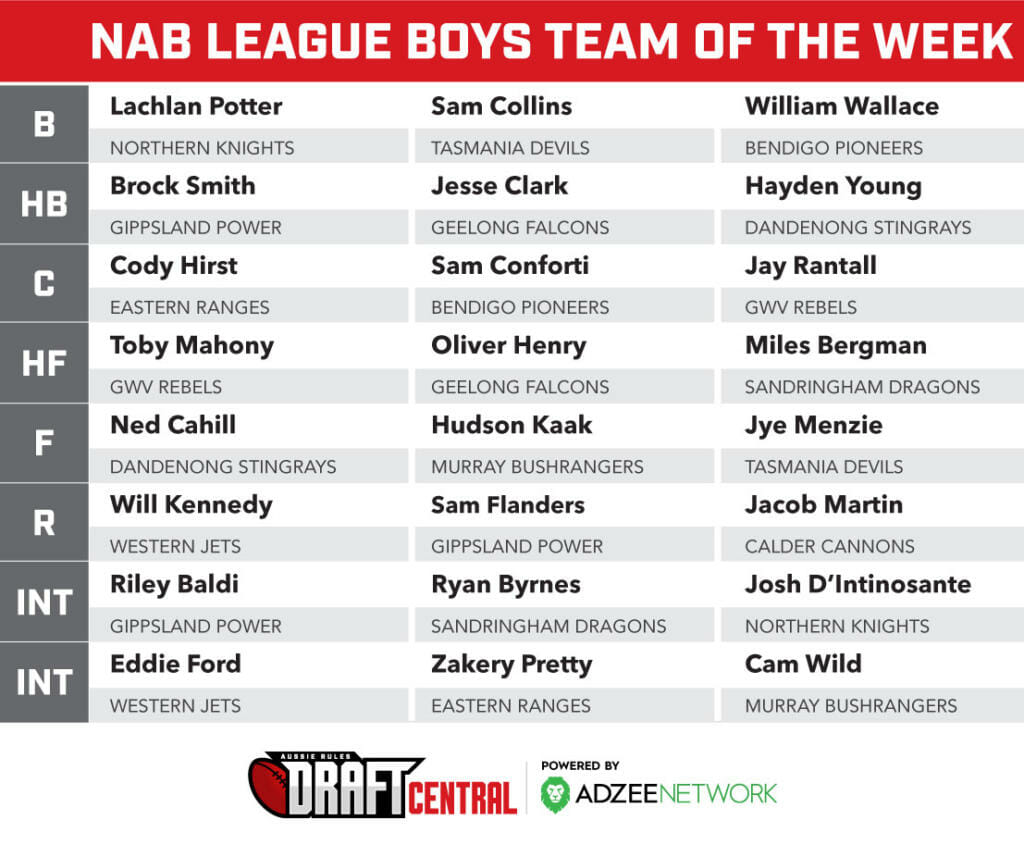 IN the most evenly spread Draft Central Team of the Week thus far, every match provided four players from the NAB League Boys Round 7 competition. With Gippsland powering to a big win over Calder, the Power had three players to the Cannons’ one, however every other game the teams were split evenly with two apiece. There were plenty of goals kicked by medium sized players, while a number of defenders had big numbers and some strong performances from inside midfielders also saw them make the cut.

Gippsland’s trio that made the side were captain Brock Smith off half-back, Sam Flanders in midfield and Riley Baldi on the bench who was also influential around the stoppages. Calder’s Jacob Martin also found plenty of the ball despite the defeat and slotted into the midfield. Bendigo Pioneers’ Sam Conforti won our Draft Central Player of the Week for Round 7 and is named in the centre alongside fellow nominee for the award, Jay Rantall from the Greater Western Victoria (GWV) Rebels. Their teammates in the side are defender William Wallace (Bendigo) and mid-forward Toby Mahony (GWV).

On the other wing is Eastern Ranges overager Cody Hirst, joined in the side by Zakery Pretty who is enjoying a big year in midfield. Their opposition was Sandringham Dragons, as Miles Bergman and Ryan Byrnes made the 24-player squad as well. Tasmania also provided two players with match winner Jye Menzie and teammate Sam Collins represented in the team up either end. Holding down the other key defensive post is Geelong Falcons’ Jesse Clark, in the side with bottom-age forward Oliver Henry. Their opponents on the weekend were Murray Bushrangers, which provided full-forward Hudson Kaak (five goals) and Cam Wild who was impressive through the midfield.

In the other games, Dandenong Stingrays’ regular Hayden Young made the side again, as did Ned Cahill up forward, while their opponents Western Jets had ruck Will Kennedy and forward Eddie Ford in the team. The remaining players in the side come from the Northern Knights who were victorious over GWV Rebels, as Lachlan Potter‘s form continued, in the team with Team of the Week regular, Josh D’Intinosante.