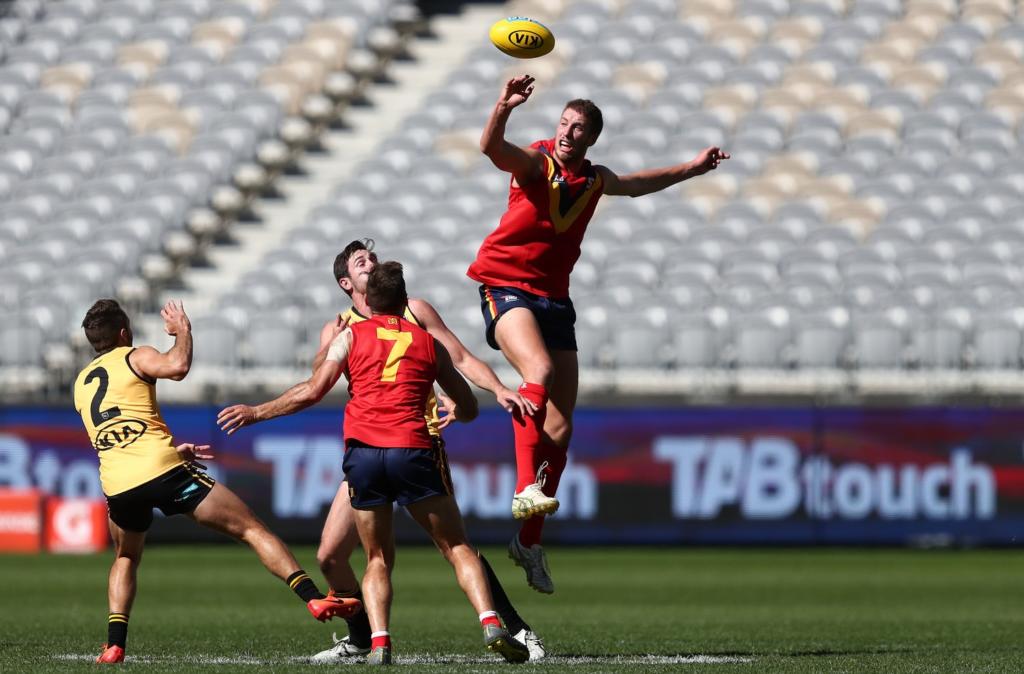 IN the latest instalment of the Hayden Bunton Jnr Cup between Western Australia and South Australia, the Croweaters defeated the Sandgropers by seven points at Optus Stadium. There was a host of potential mature-age draft prospects putting their hands up for AFL selection for both sides.

Below were the best AFL draft prospects in the game:

#4 Haiden Schloithe
The 2017 Sandover Medallist was excellent on the wing for the Sandgropers with 14 possessions, six marks, four tackles, four inside 50s, and two goals. Often the link-up player for Western Australia, Schloithe was the catalyst for many of WA’s attacking forays.

#9 Josh Deluca
The former Fremantle rookie produced another outstanding performance that could see him picked up in the AFL’s Mid-Season draft. Against South Australia, Deluca accumulated 29 possessions, laid seven tackles, took six marks, recorded four inside 50s and kicked a goal to be a deserving winner of the Simpson Medal.

#12 Michael Sinclair
Stationed in defence, Sinclair was superb for the Sandgropers, often intercepting South Australia’s attacking forays. He accumulated 16 possessions, took five marks and laid four tackles to showcase why he is one of the best defensive prospects for this year’s AFL Draft.

#15 Michael Bennell
The Albany product demonstrated why he is considered to be one of the most dangerous forwards in this year’s WAFL competition. He booted three goals (and two behinds) from just eight possessions but also laid a team-high nine tackles.

#16 Jye Bolton
The dual Sandover Medallist put in a dazzling performance that should make recruiters consider drafting him. He accumulated 28 possessions, took five marks, recorded four inside 50s, and laid three tackles to be one of WA’s best.

#23 Ben Sokol
In his first State game, Sokol emphatically confirmed why he is considered to be one of the best big-game performers in this year’s WAFL competition. He booted four goals (three behinds) from 13 possessions and 11 marks.

#1 John Noble
Stationed on the wing, Noble was excellent for South Australia providing speed and class throughout the match. He finished with 24 possessions, five marks, five rebounding 50s, four inside 50s, and four tackles.

#3 William Snelling
The former Port Adelaide player illustrated why he is deserving of another chance at AFL level, with a classy performance against the Sandgropers. He accumulated 19 possessions, laid eight tackles and kicked a goal.

#7 Aidan Tropiano
The 2015 Sandover Medallist was sensational against his native state. He collected a team-high 28 possessions, laid a game-high 11 tackles and recorded four inside 50s to be an influential figure for the Croweaters’ victory.

#15 Jonathon Beech
Playing at centre half-forward, Beech always offered a presence in the attacking half. He gathered 11 possessions, took three marks (one contested), and booted four goals to be one of the best players for South Australia.

#23 Jordan Foote
The former Sydney Swans Academy product was brilliant for South Australia with 24 possessions, six marks, three inside 50s, three rebounding 50s, two tackles and two goals. With such performances, Foote could be headed for a second chance at AFL level.

#33 Michael Knoll
The former basketballer was a deserving winner of the Foss Williams Medal (South Australia’s Best on Ground medal) in the Croweater’s victory over the Sandgropers. He finished with 15 possessions, 31 hitouts, five marks, four tackles and three inside 50s.