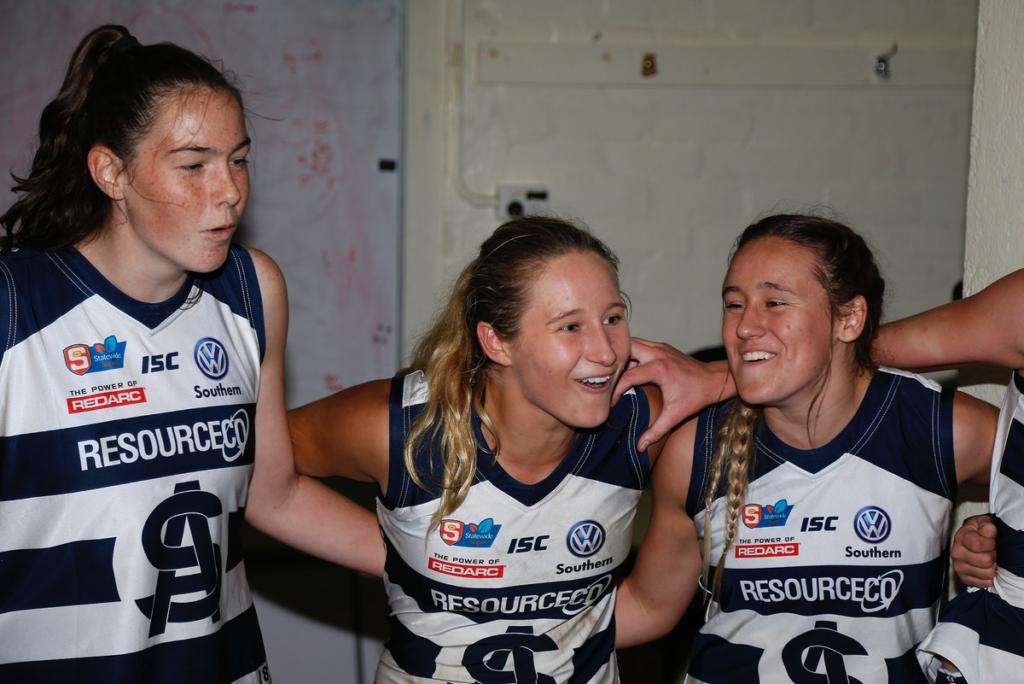 THE reigning premiers are back in the decider after a 13-point win over minor premiers, Norwood – South Adelaide’s second win over the Redlegs in three rounds – while North Adelaide breathed a sigh of relief, coming back from a four-point final break deficit against Glenelg to ensure their premiership dream remains alive.

A herculean effort from Ebony Marinoff and Glenelg was not enough for the Tigers to cause an upset win over North Adelaide in the do-or-die semi-final on Friday. The underdogs conceded the first two goals of the game with Leah Tynan and Kelly Barltrop getting the Roosters on top in the first term, before majors to Ellen Fauser and Melinda Speechley saw the Tigers hit the front at half-time by four points. The third quarter was a titanic struggle with neither side able to score such was the intensity and defensive pressure, and the Rooster fans were feeling nervous still down at the final break having scored one behind since quarter time. Luckily their fears were put to bed early in the fourth with Brittany Perry putting her side in front, before Barltrop booted her second a couple of minutes later to five them an eight-point lead. Tasja Batzavalis picked a good time for her first league goal in the tenth minute and the margin was back to two points. Unfortunately for the Tigers despite their best efforts they were not able to breakthrough and the Roosters breathed a sigh of relief knowing the next two weeks were going to be tough. North Adelaide shared the ball around in the win, with Lauren Daniel amassing a team-high 17 disposals, as well as two marks, two clearances, two inside 50s and four tackles. Amber Ward won 14 touches, laid five tackles and had two rebounds, while Perry worked hard between the arcs with four clearances, four rebounds and three inside 50s, while laying six tackles and having 13 disposals. Barltrop made the most of her opportunities with two goals from six disposals. The clear standout player on the ground to no-one’s surprise was Marinoff, who broke her own league disposal record for a third consecutive week, amassing 38 disposals, taking nine marks (two contested), eight clearances, five inside 50s, four rebounds and laying nine tackles. Cassie Hartley also had 17 touches, while Samantha Franson was fierce around the stoppages with 16 touches, four clearances, three inside 50s and a game-high 12 tackles. Caitlin Gould was busy in the ruck with 24 hitouts, three clearances, seven inside 50s and five tackles as well as 15 disposals. It was a promising season for Glenelg but the Tigers now bow out, while the Roosters face Norwood next week for a spot in the decider.

It was the game talked up as the biggest of the weekend, but South Adelaide almost put the result to bed in the first half, piling on four unanswered goals – including two to Teah Charlton – to lead by as much as 24 points late in the second term. Matilda Zander gave the minor premiers a glimpse of hope in the dying minutes of the second term with the Redlegs’ first goal, before Norwood looked to have found its groove in the third, with Kate Fenton slotting two majors. The Redlegs had drawn within five points at the final break and looked to have the momentum running into the last quarter, but it was only South Adelaide who managed to get on the board, with Tiffany Copley booting the winning goal midway through the quarter as the Panthers ended up winning by 13 points in a more comfortable fashion than predicted. Nicole Campbell and Nikki Gore both had 15 disposals in the win, while combining for eight clearances, 14 tackles, four inside 50s and four rebounds, while Sarah Wright was busy in defence with four rebounds to go with her 14 disposals and three tackles. Hannah Munyard had 13 disposals, while Czenya Cavouras was down on her usual numbers like most of her teammates, but still laid eight tackles. For Norwood, Najwa Allen still managed 20 disposals in the loss, while taking three marks, having three inside 50s and laying three tackles. The usual suspects were all at the top of the disposal tallies with Hannah Dunn (18 touches, five marks, six tackles, three clearances, three rebounds), Hannah Priest (17 disposals, four marks, six tackles and two rebounds) and Sally Riley (15 disposals, two marks, three clearances and three tackles) all important. Leah Cutting was once again strong in the ruck with a game-high 19 hitouts as well as 14 disposals, two marks, four clearances and four tackles. It was a disappointing result for the minor premiers who have had a terrific season but dropped two of their past three games, both to the same opponent. Now the Redlegs must prepare for a preliminary final against North Adelaide who escaped Glenelg’s clutches in order to book a rematch with the Panthers in the 2019 decider and try and reverse the result of last year’s grand final.