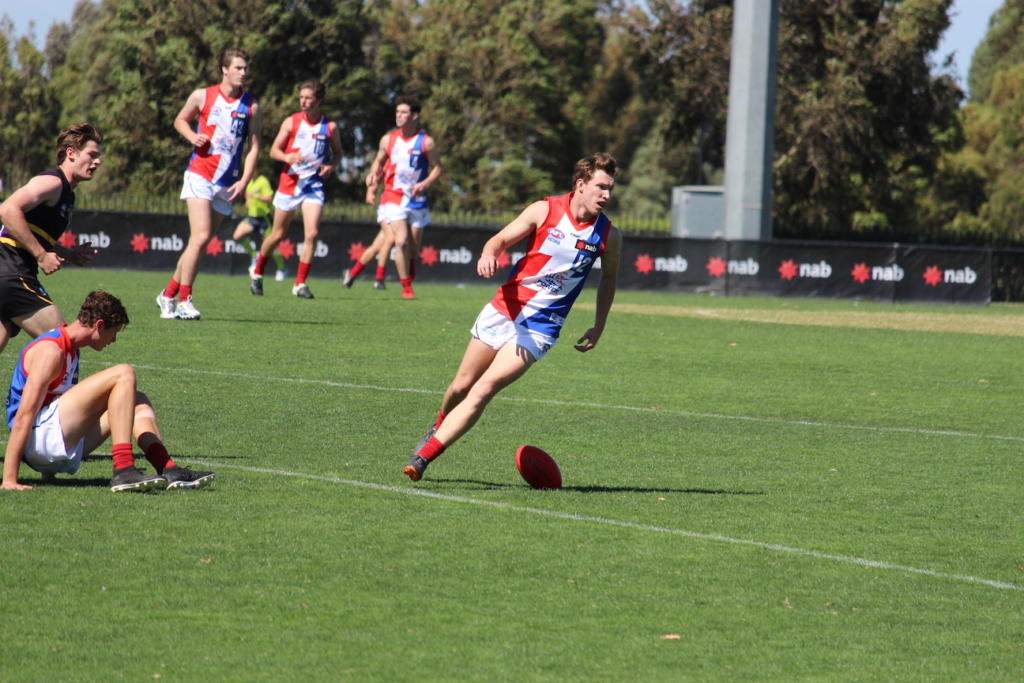 THE Northern Academies have come and gone in the NAB League, and proceedings will continue as normal for the remainder of the year as the ladder begins to take shape. A top four clash looms as the game of the weekend, with a host of bottom-half sides set to jostle for position in an important round of action.

Fresh off their first NAB League season win, the Geelong Falcons will be hoping for more of the same when they host Murray Bushrangers in Avalon. While both teams can only lay claim to one win thus far, Geelong sits a ladder spot above its weekend opponents having also picked up a draw. Bad luck has also followed either side to this point, with close games going the way of their opposition more often than not – seeing their effort and ability to be competitive go unrewarded. The Falcons will also be without co-captain Cooper Stephens for most of the year, so need their brigade of small running midfielders to stand up once again, while Oliver Henry remains a target up forward. The Bushrangers welcome back some over-age depth in the likes of Ben Kelly, Zane Barzen, and Liam Fiore, looking primed to make a mid-season charge up the ladder. While this could be a good chance to start a winning run, the inexperienced Falcons have showed they are often competitive and can stay with sides around their level. Expect a good battle with a second win up for grabs.

The ladder-leading Dandenong Stingrays travel to Williamstown to do battle with Western Jets, looking to keep their undefeated record in tact. A draw against Geelong remains the only blemish in an otherwise perfect Stingrays season, with their last two wins after a Round 4 bye both coming by over 70 points. The 3-2 Jets will be wary of their weekend opponents’ form, but are on a good run themselves after winning two-consecutive games before enjoying their own bye last week. The bye round proved perfect timing for over-agers Daly Andrews and Will Kennedy, who put their hands up for mid-season draft selection in the Young Guns game and will be back in Western colours this week. In the same vein, Dandenong welcomes Mitch Riordan and Bailey Schmidt back to a lineup which looks like it is really starting to click – with key position and smaller guns on each line. Equal form lines aside, the Stingrays will fancy their chances in this one, but a win may not come as easily as in their last two outings.

Bendigo Pioneers and Tasmania Devils will both be looking to build on their two respective wins for the year when they clash at Queen Elizabeth Oval in Sunday’s first game. The ‘Pios have been unable to add to their impressive Round 1 and 2 wins, but only went down by a combined 21 points in their last two games despite losing a couple of key players to school football. Meanwhile, Tasmania has also gone down in its last two efforts, including a heartbreaking one-point loss to Oakleigh at home last week. The positive signs are there for the Devils though, with Mitch O’Neill the only Australian representative star not to return to the side since his showcase outing. Despite others returning, Matthew McGuiness, Joseph Chaplin, Nicholas Baker, and Tyler Penwright are all key outs this week, leaving the Devils without some key experience and class. With the ability to hang with Bendigo clearly there, the travelling side will hope the continued development of their players can see them snatch another set of four points. But with travel a factor and Bendigo looking to stick with the pack of teams on 12 points, it will prove no mean feat.

Gippsland Power will look to continue its surge up the NAB League ladder at home on Sunday, but Calder Cannons stand in the way of a possible third-consecutive win. The hosts have gotten the better of three results decided by under 10 points, with their only loss coming by just six against table-toppers, Dandenong. Calder is on a run of two-straight wins after its Round 4 loss to Tasmania, faring far more competitively despite being the worst-placed of three sides on 12 points. While the Power has only named an extended bench, Calder looks set to lose some back-six class this week – with Sam Ramsay and Mason Fletcher out. Despite that, over-agers Sam Graham and Josh Kemp should prove key ins for a Cannons side looking to compete with a formidable Gippsland outfit. With Sam Flanders kicking into gear, Riley Baldi returning well from injury, and skipper Brock Smith nominated for the Round 6 Draft Central Player of the Week, the Power should soon consolidate themselves as a genuine premiership contender.

A third win is up for grabs for both the Greater Western Victoria Rebels and Northern Knights as they clash in Ballarat on Sunday afternoon. Despite boasting equal wins, the Rebels have a far greater percentage than the Knights having won by 55 points over the Northern Territory Academy and their biggest loss coming by 14 points. Northern’s two victories have come in the last two weeks against Bendigo and the NT, with the Knights also breaking through for a season-high score of 98 (their next-best is 73). Some over-age and bottom-age inclusions for the Knights will aid their cause, with Sunny Brazier, Ollie Simpson, Nikolas Cox, and Ben Major returning to the side alongside top-age midfield ace, Sam Philp. Over-age talent also returns for the home side, as Jed Hill, James Cleaver, and Matty Lloyd have all been named. With the sides’ collective wins coming against bottom-half opponents, both will see this game as an opportunity for more of the same as the ladder starts to take shape. Northern should also be breathing fire after last year’s Wildcard Round thrashing at the hands of their weekend opponents, so expect a hot contest.

Arguably the game of the round will be played out in Moorabbin, with Sandringham Dragons and Eastern Ranges set to do battle in a top four clash. Having been knocked off top spot after a bye round, the Dragons will be looking to pick up from where they left off, winning by 97 points in their last outing. While the Ranges were beaten by a strong Gippsland side last time out, they have been a one of the competition’s more consistent teams, with their only other loss coming to a full-strength Oakleigh in Round 1. A strong array of talls remains in the Sandringham 22, with Ryan Byrnes the key man in midfield and Angus Hanrahan and Riley Bowman coming off a Young Guns outing. The likes of Cody Hirst and Riley Smith come back for Eastern, adding strength to their running and tall games respectively. With much of the Dragons’ threats coming in their 195cm-plus players, this will again be a tough test for an Eastern side stacked with smaller runners, despite a bigger forward line. A tight tussle should ensue, with one side looking to stamp its authority and the other keen to prove it is a genuine contender.