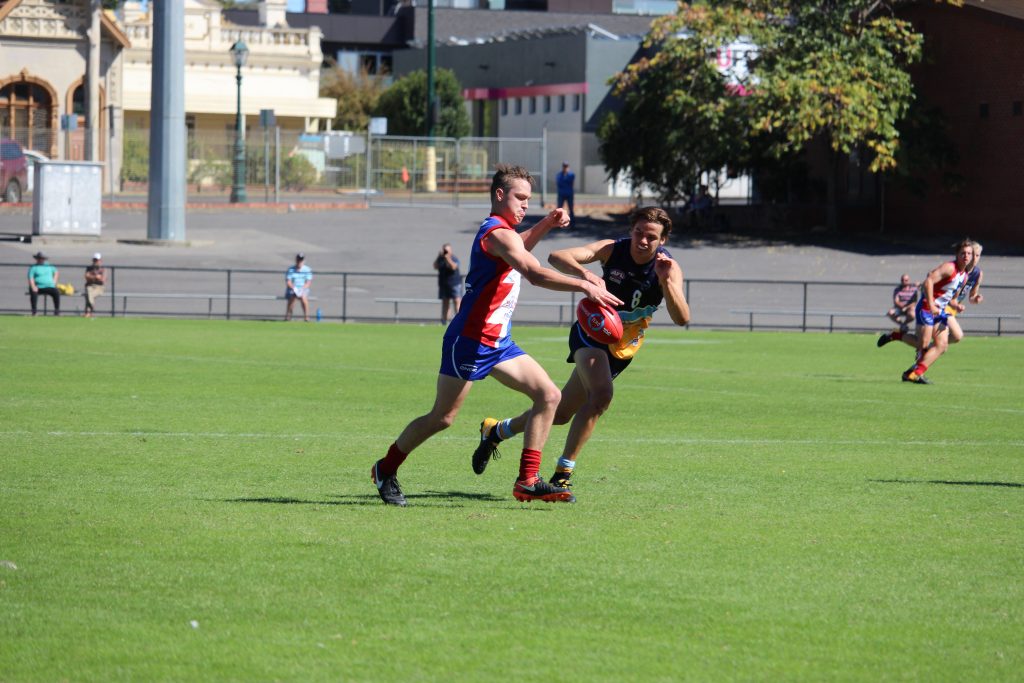 NORTHERN Academies played out their final NAB League games in Round 6 as a new leader emerged and the Geelong Falcons grabbed their first win for the season. The Falcons’ victory saw Gold Coast Suns jump Sydney Swans to claim the Academy Division 2 title on percentage, as both teams finished with 4-1 records. All that, and more in this weekend’s wash-up.

Oakleigh Chargers held on for a hard-fought win by the narrowest of margins over Tasmania at North Hobart Oval, helping them climb back into the NAB League top eight. After breaking to a slim quarter-time lead, the Chargers gave up a nine-point half time lead after going goalless in the second term. With their backs against the wall, Oakleigh stood up to reclaim the lead, and hold on until the final siren as both sides contributed 1.2 in the fourth quarter. Oakleigh’s Thomas Lovell was efficient in front of goal with half of his eight touches ending in six points, but it was co-captain Trent Bianco who was his side’s best with 42 disposals, five marks, seven clearances, nine tackles and eight inside 50s. Josh May was also instrumental with 28 disposals and five clearances, while ruckman Jacob Woodfull was handy with 16 disposals and 27 hitouts. Harrison Ireland was named the Devils’ best for his role as an undersized ruck, while Ollie Davis was their leading ball winner with 21 touches and five clearances. Fellow bottom-age star Sam Collins was not far behind, matching AFL Academy member Will Peppin‘s effort of 18 disposals, while Will Harper and Rhyan Mansell each booted two goals. While Oakleigh can enjoy a bye in Round 7, Tasmania faces a trip to Bendigo to face the Pioneers, who are also 2-3.

Murray Bushrangers slump to 1-4 as the worst-placed Victorian NAB League side after going down by 11 points to GWS Giants Academy. The Bushrangers are unlucky to find themselves in that position given three of their four losses have come by a collective margin of 18 points, with their other loss (24 points) coming against the Swans Academy last week. The Giants, meanwhile, picked up their second win with star midfielder Tom Green (37 disposals, 11 clearances) back in the side, seeing them finish third of the five academies. While Green was at the centre of everything for the Giants, Jeromy Lucas (33 disposals, seven marks) was also instrumental alongside over-ager Ed Perryman (31 disposals, nine marks) in his first game for the year, while Harry Grant 23 disposals, three goals) and Liam Delahunty (21 disposals, seven inside 50s) were effective forward of centre. Dylan Clarke was Murray’s best and equal-leading disposal getter with 27, matched by returning skipper Lachlan Ash (six marks, six tackles, one goal). Jimmy Boyer found the goals well with three majors, joined as a multiple goal kicker by Jye Chalcraft and Hudson Kaak (both two goals). While the GWS products bow out of NAB League commitments and ready themselves for possible Allies selection, Murray faces Geelong in hopes of snaring a second win and a run of form.

The Cannons came out firing in the first term and really took control of the game placing them in a strong position for the rest of the game opening a four goal to one first term. In tricky wet and slippery conditions both sides battled hard to win possession with forge the ball forward but it was the Cannons who prevailed against the Pioneers who could not capitalise in front of goal. Jacob Martin led the way for the Cannons winning a heap of the ball with 36 touches, four inside 50s and five tackles for his efforts, while teammate Daniel Mott was impressive. Mott worked hard across the ground and racked up 36 touches to go with his first quarter goal making him a key player for Calder. Brodie Newman also had a solid performance with a game 12 marks testament to his strong hands and clever placement to get into the right position and take big grabs. Mason Fletcher made his presence felt on the scoreboard nailing two majors while Ned Gentile scored 1.2 for the afternoon. After a quiet start James Schischka worked his way into the game and amassed 20 touches along with eight tackles for the Pios. He was closely followed by teammates, Riley Wilson (18 touches) and Brady Rowles (17) while Joshua Treacy did a wealth of work in attack with five inside 50s. Riley Ironside also had a big second half going in hard at the contest and doing the little things well to try and influence the play. He finished with a major, 17 possessions and five marks.

Gold Coast Suns snatched the Division 2 title with a fighting 14-point win over the Greater Western Victoria Rebels in front of their home crowd. Leading at every break, the Suns bounced back well from a heavy loss last week with a spread of four multiple goal kickers heading a solid team performance. While Connor Budarick again led all comers for disposals (23), Max Pescud booted an equal game-high four goals and Hewago Paul Oea was named best for his 19 disposals, seven clearances and two goals. In what was a low-disposal game, the Rebels’ top five ball-winners had between 15 and 16 disposals each, with Riley Polkinghorne and Isaac Thomas leading the way. Nick Caris claimed four goals, with Cooper Craig-Peters and Liam O’Brien bagging two each as the other GWV multiple goal kickers. While the Suns’ NAB League commitments are over, GWV plays Northern on home turf as their season rolls on.

An electric Geelong provided a big upset, leading at every change to record a 31-point victory over the Sydney Swans Academy. In a tough and uncompromising contest in near perfect conditions at Trevor Barker Oval, the Falcons were too good offensively for a wasteful Sydney outfit. Geelong’s multitude of quick and evasive small midfielder-forwards were too much for the Swans to handle, both on the inside and outside of the contest. Geelong’s slick and accurate ball movement overwhelmed the Sydney defence, with Jesse Clark being instrumental in setting up play with his damaging right boot, whilst Oliver Henry’s draft stocks continue to rise, backing up his five-goal effort in Round 3 with a four-goal haul this week. For the Swans, Braeden Campbell worked tirelessly all day, attacking the contest with vigour and was a clear standout in a team lacking a bit of intensity.

Reigning premiers Dandenong Stingrays climbed atop the NAB League ladder for the first time this season, trouncing the Brisbane Lions Academy by 71 points in Queensland. With only a draw hindering their otherwise unblemished record, the Stingrays hit top gear after half time with ten goals to one in a dominant display. The result rounds off a disappointing end to Brisbane’s NAB League cameo, with the Lions losing four-straight after their Round 2 win over GWS. Will Martyn has been far from disappointing though, and contributed 32 disposals to lead all comers, but was beaten out by Justin Currie (16 disposals, five marks) as Brisbane’s best. Noah Cumberland (26 disposals, nine clearances) was also thereabouts with Tom Matthews matching his disposal output, while Samson Ryan (14 disposals, 32 hit-outs) had a good day in the ruck. Hayden Young was touted as a key inclusion for Dandenong, and was amongst the best with his team-high 28 disposals and six clearances. Bottom-ager Clayton Gay was adjudged to be his side’s best though, with 21 disposals and 2.2, while over-ager Corey Ellison also claimed two majors in the win. The new ladder leaders travel again next time out to face Western, while Brisbane’s brightest will prepare themselves for potential Allies selection.

Gippsland Power ground out a 10-point win over Eastern Ranges to see them continue their gradual climb towards the top of the NAB League ladder, while Eastern remains lodged in the top four despite the narrow defeat. The Ranges got the better of a high-scoring opening term, but Gippsland reversed the six-point margin heading into the main break. With both sides performing well in front of goal and the margin cut back to within four points in the final quarter, a grandstand finish was on the horizon. After Eastern reclaimed the lead with two quick goals, Gippsland powered home with the last three to seal victory. Zak Pretty and Lachlan Stapleton again won a heap of the ball to lead all comers with 28 disposals each for Eastern, with opportunistic forwards Ben Hickleton and Bailey White bagging hauls of three goals. Power captain Brock Smith collected 27 disposals and nine rebound 50s to earn a Draft Central player of the week nomination, with Riley Baldi (27 disposals, seven marks) continuing his solid return to be named amongst the best. Sam Flanders (26 disposals, nine clearances, two goals) was instrumental in helping Gippsland get over the line, with Fraser Phillips (20 disposals, three goals) also finding the ball and big sticks. The Power host Calder next week with an eye on Eastern’s top four spot, as the Ranges set to face Sandringham in their biggest test yet.

Northern Knights claimed its second-straight victory after a winless first four games, comfortably accounting for the Northern Territory Thunder Academy by 38 points at Ikon Park. The loss sees NT bow out of the NAB League without a win, but having shown plenty of promise. Confident on the back of last week’s breakthrough performance, the Knights were simply too strong and put at least three goals on the board in each quarter. Josh D’Intinosante continues to do all the right things, collecting a game-high 25 disposals, 11 marks and two goals, but was beaten out to best-on honours by Lachie Potter (24 disposals, seven rebound 50s). Ryan Sturgess (21 disposals, eight marks) and the returning Ryan Gardner (22 disposals, four clearances) also chimed in well, with James Lucente (three goals) leading a brigade of six Northern multiple goal kickers. Top NT prospect Malcolm Rosas Jr was one of three Thunder players to boot two goals, with Shawn Foster‘s game enough to see him named best. Joel Jeffrey had another impressive outing in the back half with 21 disposals, seven marks and eight rebound 50s, while Ben Jungfer was his side’s leading ball winner with 22 touches and five clearances.