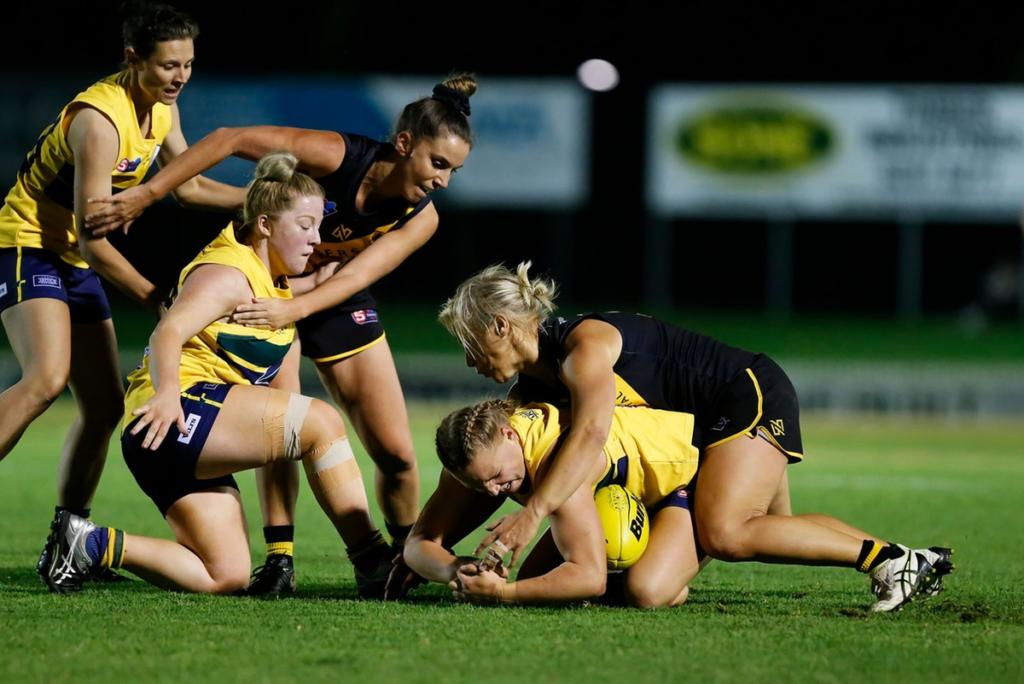 THE four favourites all triumphed on the weekend in the South Australian National Football League (SANFL) meaning the four remaining sides in the premiership race come into the first week of finals in form. Norwood and North Adelaide both made resounding statements over their bottom three opponents, while Glenelg snatched fourth spot with a win over Woodville-West Torrens as West Adelaide slipped at the final hurdle against an impressive South Adelaide side.

North Adelaide locked up third spot with an impressive win over Sturt, holding the Double Blues goalless in the opening half and final term as they piled on 20 scoring shots throughout the game in the 9.11 (65) to 2.5 (17) victory. Kathryn Reynolds opened the Roosters’ account in the opening term with the only goal of the quarter, and by the seventh minute of the second term, Kelly Barltrop and Brittany Perry each had a goal to their name and the Roosters were 20 points up. Barltrop kicked her second just before half-time to open the lead up to 28 points, and soon Leah Tynan and Nadia Von Bertouch joined the party and the Roosters had all but sealed the game five minutes into the third term with a seven-goal advantage. Sturt finally got on the board through Sophie Hoyle and Kate Harris, but a second major to Tynan meant North Adelaide were well and truly home and hosed. Barltrop and Erica Greet finished off the game strongly with goals as the Roosters stormed to a 48-point victory in the final round of the season. The captain Von Bertouch led from the front with a game-high 26 disposals, six marks, three clearances, three tackles and two inside 50s, while Lauren Daniel had 20 touches, five marks, three tackles and four inside 50s. Reynolds (19 disposals, five clearances, three tackles) and Perry (16 disposals, seven tackles) were other Roosters who stood tall in the win. For Sturt, Georgia Bevan (21 disposals, four marks, nine clearances, two inside 50s, three rebounds and six tackles) was the best, while it was no surprise to see Maya Rigter (17 disposals, four marks and 10 tackles) and Caitlyn Swanson (14 disposals, four marls, four inside 50s and two rebounds) also among the Double Blues’ best. For the losers it is season over, while for North Adelaide the result means a semi-final battle with fourth placed Glenelg next week.

After having their perfect season interrupted last week, Norwood was always going to come out firing in the final game of the season, regardless of the fact the Redlegs had sown up top spot and the minor premiership heading into finals. After losing to South Adelaide in its only defeat of the season, Norwood showed no signs of letting up against bottom two side, Central District, piling on seven goals to zero in the opening half, before keeping the foot down in a massive 21 scoring shots to three victory. Aside from the opening eight minutes of the third term when Katelyn Rosenzweig and Jayme-Lee Sonneman hit the scoreboard, it was all Norwood as they could not miss early, and then just put the Bulldogs to the sword in a commanding message to the rest of the competition. Jo Hill and Leah Cutting both booted two majors in the opening term, and by full-time, Hill had four on the board, and the Redlegs were doing it easy in their best performance of the season, and the competition’s highest score for the year in the 12.9 (81) to 2.1 (13) victory. Najwa Allen‘s sensational season continued with another 29 disposals, nine marks, five clearances, six inside 50s and three tackles in a best-on-ground performance, while Hill’s four majors were accompanied by four marks and six hitouts. Cutting was by far the dominant ruck on the ground with 32 hitouts and 15 disposals, while getting it done at ground level, laying 12 tackles. Sophie Armitstead (20 disposals, nine clearances and three inside 50s) and Monique Hollick (20 disposals, 13 marks – two contested – nine inside 50s and a goal) were others who stood tall in the huge win. For Central District, Demi Sonneman stood up with 19 disposals, five marks, four rebounds and four tackles, while sister Jayme-Lee battled hard despite being beaten in the ruck, having the 13 hitouts and laying seven tackles as well as having 12 touches and four clearances. Kimberley Fry (13 disposals, eight tackles) and inclusion Laitiah Huynh (12 disposals, three clearances) were others who had an impact for the losing side.

It was far from easy, but second placed South Adelaide finally shook off their West counterparts to secure second spot and a double chance, while bundling the Westies out of the finals race. Neither side could find its range in the opening quarter, and South Adelaide looked good when Elyse Haussen slotted through the first major of the game five minutes into the second term. But that was followed by three consecutive West Adelaide goals as the visiting fans began to believe they could topple the favourites. Mary Smith, Melanie Elsegood and Rachelle Martin had all booted goals in that second term and the Bloods found themselves seven points ahead at the main break despite three less scoring shots. Unfortunately for the visitors, it was all South Adelaide from there, as they piled on five consecutive majors in the second half, with Madison Bennett booting two, before Elsegood could slot her second late in the game. While it cut the deficit to 16 points, by that stage the game was done and dusted and West Adelaide’s finals hopes dashed. Nikki Gore led the way for the Panthers with 20 disposals, four marks, four inside 50s and four tackles, while Indy Tahau was huge in the air, taking three contested marks as well as her six uncontested marks, while racking up 17 disposals, eight hitouts and three inside 50s. Nicole Campbell, Czenya Cavouras and Hannah Munyard again performed strongly through the midfield as they have all season, amssing at least 16 disposals each, and combining for 18 tackles and 11 inside 50s. For West Adelaide, Martin was impressive with 24 disposals, eight marks and eight tackles, while Abbie Ballard had an equal game-high 24 disposals, with three marks, six clearances, five rebounds and five tackles. Madison Newman had six rebounds ato go with her 22 disposals and seven marks, while Rebecca Owen had 18 touches, seven marks and two tackles in the loss. South Adelaide now faces Norwood next week for a spot in the 2019 decider, while West Adelaide will have a long break to reset and prepare for the 2020 season.

Another massive performance from Adelaide Crows star, Ebony Marinoff has led Glenelg to its first finals series on the back of a 19-point win over winless Woodville-West Torrens. The Eagles were destined for the wooden spoon regardless of the Round 10 result, but the Tigers needed the win to guarantee finals action after receiving the wooden spoon last year. After Chloe Forby booted the opening goal of the game, it was all Glenelg as Ellen Fauser, Lucy Bellinger and Marinoff all slotted first quarter goals for a 14-point quarter time lead. The Eagles managed to restrict the Tigers’ scoring in the second term as Bonnie Wells converted the only major of the game, but the visitors could not score themselves, as Glenelg headed to half-time with a 24-point lead. Lucy Armitage booted two majors in the third term either side of Kiana Lee‘s first for the Eagles, and handed the Tigers what would have expected to be an unassailable 33-point lead at the final break. Lee and Jovanka Zecevic gave the Tigers something to think about, before Samantha Franson settled the nerves for the home side with her first major, while Rachel Dunstan booted a late consolation goal for the losing side. Marinoff was unbelievable throughout with a sensational 36 disposals – breaking her own personal game record in the competition from last week, while amassing eight marks, nine clearances, 10 inside 50s, nine tackles and booting 1.2. Fauser had the next most for the Tigers with 19 touches, five marks – two contested – as well as seven inside 50s and a goal. Caitlin Gould was dominant in the ruck with 22 hitouts, 16 disposals and six clearances, while Franson had the 15 touches, five marks and nine tackles. For the Eagles, Lee had 14 disposals and seven marks – three contested – to go with her two goals, while Stephanie Walker finished with 14 disposals, three marks, three rebounds and three clearances. Jaimi Tabb (13 disposals, four marks, three clearances, three rebounds and seven tackles) was also prolific for the visitors in defeat. Next week the Tigers face off against the raging North Adelaide side to keep their premiership dream alive, while the Eagles will be disappointed they could not win a game in their inaugural season, but will take solace from the fact Glenelg were wooden spooners 12 months ago and are now entering finals.