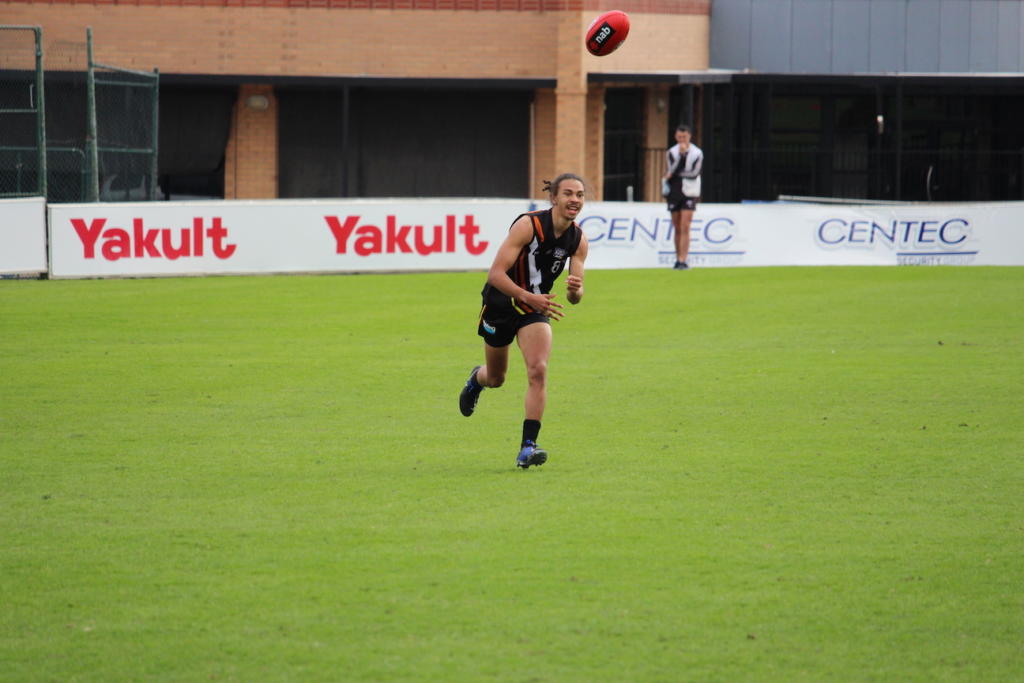 THE Northern Academies will each go around for the final time in the NAB League ahead of National Championship commitments next month, while Sandringham and Western can enjoy byes in Round 6. Gippsland v Eastern firms as the game of the round as the Power eyes off a top four spot, with the Swans Academy looking to complete an undefeated stint.

Tenth and eleventh face off in Tasmania as the Devils host Oakleigh Chargers at North Hobart Oval with both sides looking for a third win. Oakleigh has suffered three-straight defeats on the back of having much of its side’s core stripped, with both wins coming in the opening two rounds. Co-captains Trent Bianco and Dylan Williams have remained amidst school football outs over the last two weeks, but over-ager Joe Ayton-Delaney is a key omission this week on the back of being selected to play in the annual Young Guns fixture. Tasmania’s inclusions will also put a dent in the Chargers’ hopes of bouncing back, with Australian Under 17 representatives Jackson Callow, Sam Collins, and Oliver Davis all coming back into the side for this clash. While the Devils went down heavily last week after consecutive wins previously, they will stand a huge chance of causing an upset here with home ground advantage and a weakened Oakleigh side searching for form.

With tenth and eleventh opening the round, thirteenth placed Murray Bushrangers hosts the fourteenth placed GWS Giants Academy as both sides search for a second win. The Giants were unlucky not to add to their sole victory as they went down by nine points to Gippsland last time out, but will be keen to finish up their NAB League commitments on a good note. Beating Murray in Albury will be no mean feat despite the Bushrangers’ 1-3 record, as the home side could well have been sporting an opposite record coming into the game after going down twice by under a goal. The return of Lachlan Ash will be a big boost for Murray, but they will be without talented over-agers Ben Kelly and Zane Barzen from last week’s side. The Giants will be without talent of their own as James Peatling exits the side, but will be buoyed by the inclusion of midfield bull, Tom Green. With the Division 2 prize out of the question for GWS, the result looms of greater important to Murray as it looks to mount a charge up the ladder through the mid-season period.

Calder and Bendigo are on the hunt for their third wins of the season, and both have the chance to do so as they face off at RAMS Arena on Saturday. While Bendigo are the second-best place team on eight points after a lightning start to the season, Calder is the worst-placed of the five teams with two wins, and sit twelfth. The Cannons will come into the clash with a better bout of confidence too, having won last week against Geelong – on the other hand, Bendigo has lost its last two games. While the Pioneers will again be without key men Thomson Dow and Brodie Kemp, as well as Jacob Atley to the Young Guns game, there are no massive changes from the side that lost to Northern last week. Calder are much the same despite over-agers Sam Graham and Josh Kemp being unavailable, with its over-age depth proving handy. The Cannons’ win last week would have them feeling good, but the quest for a second-straight will prove difficult against a Bendigo team looking to make up for a result missed in their previous effort.

Greater Western Victoria search for a second-straight win heads to the Sunshine State, as the Rebels take on Gold Coast Suns Academy to open Sunday’s Queensland double-header. The Rebels’ big win last week over Northern Territory saw them add to their Round 2 victory over Geelong, while the Suns suffered their first loss in a hefty defeat at the hands of Eastern. Despite the polar opposite form lines, this clash should prove to be a close one between the two top-eight sides, especially since the Rebels have competed in three games decided by under seven points. That competitiveness will have to well and truly be present though, with over-agers James Cleaver, Matt Lloyd, and Jed Hill all set to miss and test the Rebels’ midfield depth. While Dirk Koenan and Ryan Gilmore are out for the Suns, they have benefitted from being able to consistently field near-full strength sides throughout their four games, and this will be no different. With a chance to claim Division 2 honours still up for grabs on Gold Coast’s end, expect them to have a red hot crack to end their NAB League campaign.

Geelong will hope to spoil Sydney Academy’s Division 2 title hopes and collect its first win when the two do battle on neutral ground in Sandringham. The Falcons have points on the board after their Round 3 draw with Dandenong, and have been competitive in one and seven point losses to suggest they can be competitive. Meanwhile, the Swans Academy has had no such trouble in its four games, winning all of them to sit third in the overall NAB League standings. A win would see the Swans clinch the Division 2 title as the best placed academy, with the added notch of going undefeated. With the likes of Errol Gulden and Braeden Campbell back in after Australian representative action, the Swans stack up as formidable opponents. On the other hand, Geelong will be left with holes to fill at either end as Charlie Sprague and Sam Christensen report for Young Gun duties alongside Harry Stubbings, but the likes of Henry Walsh and Oliver Henry replenish the line-up. The Falcons will be breathing fire after letting one slip, and could throw a spanner in the works against much-fancied opponents.

A second win is on offer upon the Brisbane Lions Academy’s exit from the NAB League on Sunday when they welcome Dandenong Stingrays to the South Pine Sports Complex. The 1-4 Lions have suffered three-consecutive losses after beating GWS in Round 2, including a 97-point loss to Sandringham last week. The margin of defeat could have been far worse in that game though, and Brisbane will take the promise they showed in a four-goal to six second half into this bout. Dandenong had no such worries against its Metro opponent in Round 5, trouncing Oakleigh by 70 points to hold an undefeated 3-0-1 record and fourth place. While the Lions have made five changes, their lineup has seldom been disrupted and it showed in their two competitive outings against Eastern and Gold Coast. 2018 Academy skipper Cody Stackelberg returns after a stint in the NEAFL, but the Stingrays have made the most significant ins with Hayden Young and Cody Weightman included. Young could get a good run in the midfield with Mitch Riordan out and Jai Nanscawen following, setting up an exciting midfield battle against Brisbane’s ball winners. The Lions will want to finish well in front of a home crowd, and travel could well be a defining factor for the Stingrays.

In what looms as the game of the round, second-placed Eastern (4-1) travels to face a surging Gippsland Power side in Morwell. The Ranges have shown their solidity and evenness across the board in four-consecutive wins, toppling two metro sides and two academies. Gippsland has only put one foot wrong, losing narrowly to Dandenong in Round 2, but are otherwise building nicely to sit seventh as one of three 3-1 sides. Hopes of a third-consecutive win will be boosted by the inclusion of Sam Flanders, but in-form over-ager Kyle Dunkley comes out of the side as he readies for the Young Guns game. Cody Hirst, Joel Nathan, and Riley Smith are set to play in the same game alongside James Blanck, with the Ranges naming an extended bench to cover their losses. Eastern has been a somewhat of a surprise packet thus far, but Gippsland have a wealth of top-end talent that they will trust to stand up in what should be a tight tussle.

Northern Territory faces its last chance to come away with a NAB League win as it readies for battle against the Northern Knights at Ikon Park. The Knights finally got on the board last week with a come-from-behind win over Bendigo on Friday night, leaving their weekend opponents and Geelong as the only sides without a set of four points. While they have shown promise, NT’s narrowest losing margin was 44 points against the Gold Coast Suns academy in Round 2, with this the final time they can show their true worth on the NAB League stage. The Thunder forward line looks dangerous with leading prospect Malcolm Rosas Jr named alongside the likes of Beau O’Connell and big-man Matthew Cumming, with Ben Rioli also added to the mix this week. Ollie Simpson and Sunny Brazier come out of the winning Knights side from last week to fulfil Young Guns duties, with Ryan Gardner an important in – named in the midfield. Northern could see this fixture as an opportunity to get on a winning run after last week’s result, but Northern Territory should give it a good crack as some of their stars vie for a spot in the Allies squad.