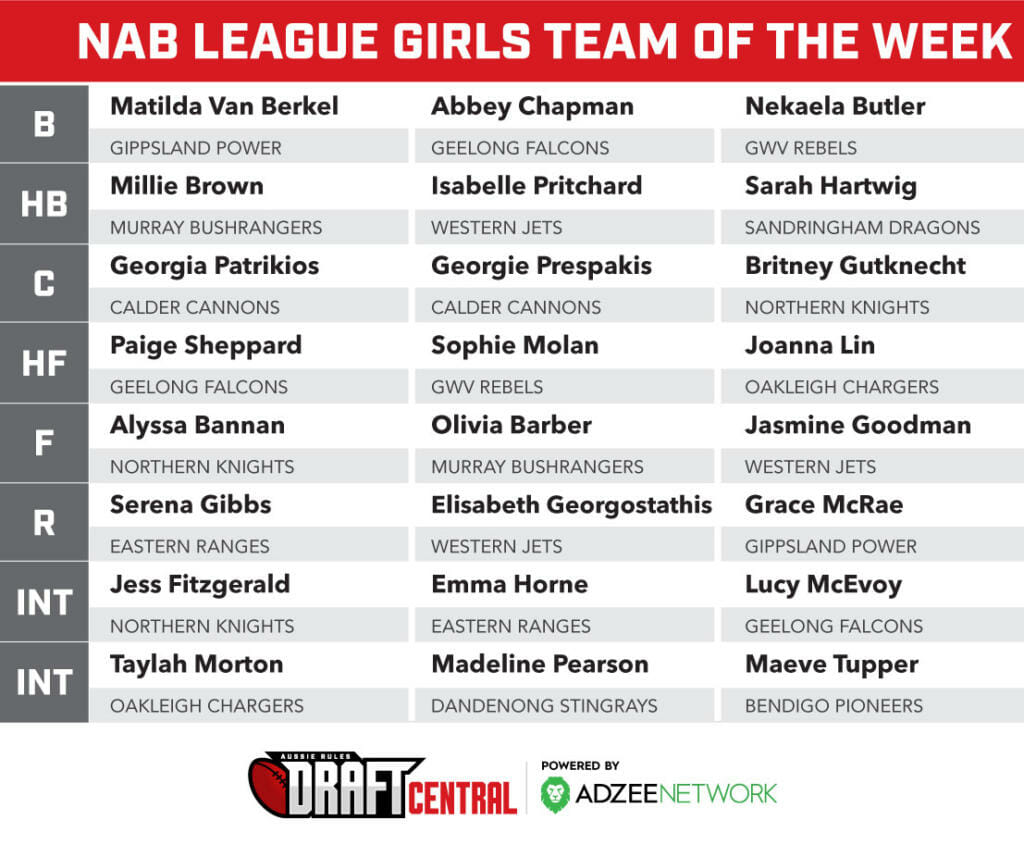 IN a NAB League Girls competition that continues to provide the goods through close even sides, the bottom two teams in Gippsland Power and Western Jets both had wins on the weekend, while ninth placed Murray Bushrangers also tasted victory. The Jets have the equal most players named in the Draft Central NAB League Girls Team of the Week for Round 7, along with fellow winners and top two sides, Geelong Falcons and Northern Knights. All three teams have three players in the squad of 24, while the Power, Bushrangers, Eastern Ranges and Oakleigh Chargers were other winners who have two players in the side. Round 7 loser, Calder Cannons still have two players in the team as does Greater Western Victoria (GWV) Rebels, while remaining sides, Bendigo Pioneers, Dandenong Stingrays and Sandringham Dragons all have one player in the team. This round saw the introduction of Tasmania, but given they are just in for the one round – and had the extra benefit of playing two games, opted not to have them in Team of the Week, however Amy Prokopiec and Mia King would have made the side for their performances across two games.

Western Jets had key defender, Isabelle Pritchard and captain Elisabeth Georgostathis making the side once again, while forward, Jasmine Goodman makes the team for the first time. Reigning premiers Geelong Falcons make up the other key defensive post with Abbey Chapman named at full-back, while Paige Sheppard and Lucy McEvoy have made the team. The other side with three players is Northern Knights, as Britney Gutknecht continues her terrific season to be named in the team, while Alyssa Bannan and Jess Fitzgerald also made the squad.

Gippsland Power’s first win of the season resulted in Grace McRae slotting into the midfield, while Matilda Van Berkel made the side again in defence. Their opponents, GWV Rebels had captain Sophie Molan named at centre half-forward – having spent time there despite being predominant in the midfield, but it was hard to squeeze out a midfielder – and Nekaela Butler in the back pocket yet again. Murray Bushrangers’ Olivia Barber has been named at full-forward and will rotate through the ruck, while Millie Brown will provide run off half-back. In the ruck is Eastern Ranges’ Serena Gibbs who kicked two goals in a match-winning performance against Tasmania, joined in the side by teammate Emma Horne.

Oakleigh Chargers and Calder Cannons also have two players each in the side, with Taylah Morton and Joanna Lin making the side for the Chargers after impressive games, while Team of the Week regulars, Georgie Prespakis and Georgia Patrikios slot into the midfield after a combined 63 disposals. The remaining players filling out the side as their teams’ only representatives are Maeve Tupper (Bendigo), Madeline Pearson (Dandenong) and Sarah Hartwig (Sandringham) of which the latter has been prominent in our Team of the Week this season.