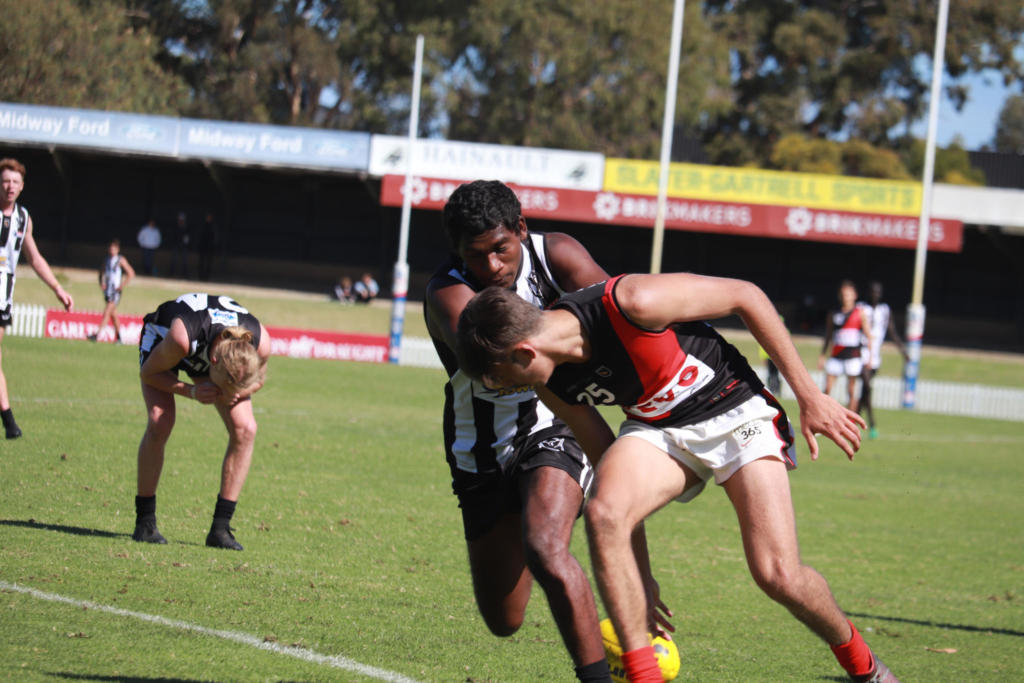 THE ANZAC Round saw the next generation of stars getting a taste of evening footy with three of the four games being played under lights. Who shone brightest under those conditions? Read below to find out.

Peel Thunder maintained its perfect record to start the 2019 season after thrashing reigning premiers Subiaco by 65 points at Leederville Oval.

With temperatures in the high twenties at bounce down, Peel was able to get the all-important quick start. The visitors amassed 14 inside 50s and used that dominance to full effect by kicking six goals with Jaxon Egan and Jonathan Ietto each kicking two majors each. In reply, the reigning premiers could only register the solitary goal through bottom ager Ezekiel Bolton.

The second quarter started in a similar vein with Peel blowing the lead out to 46 points when Deon Welhan goaled, but bottom ager Sandon Page and Trey Kennedy got some respect back for the Lions to trim it back to 37 points at the long break.

Peel had winners all over the ground, putting their opponents under constant pressure and getting the rewards on the scoreboard. Bottom-ager Ietto was setting the standard with six tackles to go along with his 12 disposals and two goals.

Subiaco continued its respectable comeback in the third term, winning its first quarter for the game (two goals to one) and cutting the margin to 33 points. Despite this, and witnessing the pattern of the game, a stunning fightback felt a bridge too far.

And so it proved with the visitors finishing as strongly as they started the game by kicking six goals to one and finishing with a emphatic 65 point victory as they look to keep pace with Swan Districts atop the premiership ladder. Peel won convincingly in all the major categories amassing 63 more disposals (302-239) 48 more marks (88-40) and 26 more hitouts (50-24) to name three.

Star of the day

It may be a cliche term, but this was the quintessential team effort. The Thunder shared the ball around beautifully with no player totalling more than 20 disposals. Every one played a part from Ben Middleton with nine marks, seven inside 50s and three goals to Jonathan Ietto, Killian Rawson and Brad Oldfield who shared 28 tackles between them. A fine effort all round.

A word for Subiaco’s Jacob Peletier who was tireless across the four quarters with 29 disposals, 11 tackles and four inside 50s.

Peel Thunder are certainly a real contender for the premiership with their team first football a pleasure to see. They will certainly face more sterner challenges than what the Lions produced, but they have the talent to be there when it counts. For the Lions, it is all about getting their football moving in a positive direction. A lot of their key premiership players have moved up to the reserves, leaving a largely fresh group with a new head coach. While they got blasted in the first and final quarters, they more than held their own in the middle two terms which is a positive to take away from this fixture.

East Perth withstood a sterling comeback from Perth to record their second win of the season with a five point win at Mineral Resources Park.

The Royals kept their opposition at arms length for the first three quarters, leading by 12 points at quarter time, eight points at half time and nine points at three quarter-time. However Perth were coming hard at their opponents. After East Perth got out to a 18 point lead midway through the third term, Perth kicked four consecutive goals and hit the lead inside the first minute of the final quarter through Alan Narkle.

Sam Sardelic then pushed the lead out beyond a goal before Sam Van Diemen responded for the Royals’ first goal in over a quarter. However Sardelic quickly responded in kind with his second of the term to push the visitors lead out again. This absorbing quarter had yet another twist with East Perth kicking two goals in as many minutes to Sebit Kuek (his third of the game) and bottom ager Cody Nash which gave the Royals the lead back and held it for the remaining four minutes to claim victory.

In this tight and tough affair it was bottom ager Adam Boules who stood above all else with 26 disposals, four marks and 14 tackles. Ruckman Jed Montgomerie was also tireless with 19 disposals eight marks, eight tackles and 24 hit-outs while Sebit Kuek was a real target with 3.4, eight marks and six tackles.

For the Demons, Mitch Mcllheney stood up tall around the ground in a terrific battle with Montgomerie amassing 26 disposals, six marks, four tackles and 21 hit outs.

Swan Districts continued their 100 per cent record to start the season as they outlasted West Perth to win by 17 points at Joondalup Arena on Saturday evening.

The lead changed hands no fewer than six hands in the first half with both teams going goal for goal. The Falcons led by three points at quarter time and by four at the long break. While it was a tight contest, the visitors would have been hoping to get more reward for their forward entries having amassed 23 of them but only kicking five goals.

The Falcons got out to the biggest lead of the game when Ewan Brazier and Lachlan Newell goaled early in the third term. But in keeping with the pattern of the game, Swan Districts responded in kind with Jack Allen who had spent the first three weeks of the season deep in defence, providing a focal point in the attacking 50 kicking two goals and pulling down a number of key marks. Both teams kicked 3.1 for the term so the status quo remained and West Perth took a narrow four point lead into the final 25 minutes.

Ayden Cartwright gave Swan Districts their first lead in the second half to begin the final term and Ethan Nordahl put the exclamation mark on a terrific personal performance when he extended the lead to double figures. His twin brother Bodhi put the cream on the cake soon after kicking his second for the game and sealing the four points. It was a professional final quarter performance by Swans who kicked 3.3 and kept their opponents scoreless.

The broader picture of the contest showed that Swan Districts were more than a deserving winner as they amassed 73 more disposals (339-266), 13 more marks (68-55) and 25 more inside 50s (51-26). Swans had a number of contributors all over the ground in their victory. Ethan Nordahl was terrific with 31 disposals and two goals Sebastian Bright was in and under at ground level all game with 11 tackles to go along with 22 disposals while Jack Allen produced a clear example of his talent with 20 disposals, 11 marks, five inside 50s and two goals. For the Falcons, Tyron Hindmarsh was superb with 34 disposals and seven tackles.

South Fremantle registered their first win for 2019 after defeating rivals East Fremantle by 25 points at Fremantle Oval on Saturday evening.

Despite having the same amount of inside 50s and one less scoring shot, the Sharks trailed by 21 points at the long break. The three quarter time score of 8.3 to 3.8 was a perfect reflection of the game as it showed that South Fremantle had made the most of their opportunities. Both teams traded goals in the fourth term as the home team recorded a comfortable victory. Despite picking up their first four points, the Bulldogs have been incredibly competitive this season with a average losing margin of 10 points across their first three games.

South Fremantle shared the load nicely with their 10 goals split between seven players. Robert Woods, Darryl Anderson and Benjamin Pears were the multiples with two each. The trio of George Wessels, Adam Correia and Brodie Plunkett were superb sharing 74 disposals and 24 tackles between them. Lachlan Taylor was terrific for the Sharks with 25 disposals and ten marks.