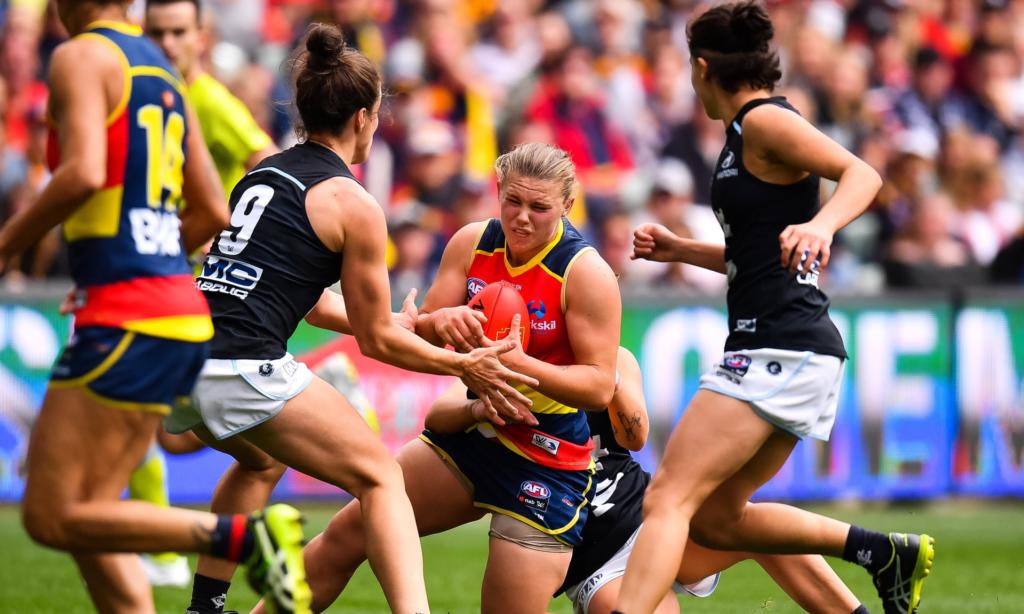 THE Adelaide Crows claimed their second premiership after an impressive four quarter performance. In front of a whopping crowd of more than 53,000 the Crows looked dominant from the first bounce. But tragedy struck late in the third term, with superstar Erin Phillips going down with a suspected ACL injury and teammate Chloe Scheer also gone for the game. Though the Blues were favoured by the whistle early on winning three 50m penalties, that did not seem to stop the rampaging Adelaide Crows who controlled the footy from the get go.

It was a fairytale start for Carlton rookie, Maddie Prespakis who nailed the opening goal to kick start their campaign. After winning a 50 metre penalty, the cool, calm and composed 19-year-old nailed a goal right in front. Carlton’s youngsters stood up early with Charlotte Wilson laying a goal saving tackle in the opening quarter against Adelaide speedster, Danielle Ponter, wrapping her up before she could let loose towards the goals. For the Crows, Erin Phillips continued her dominant season, with a beautiful clearance in the opening seconds of the game. Anne Hatchard stepped through traffic and slotted an impressive goal to open the account for the Crows who did not look back, starting a flurry of goals. They applied plenty of attacking pressure early on, creating repeat entries with the ball falling into the lap of Hannah Martin and Irish recruit, Ailish Considine, with both converting in front of goal.

Stevie-Lee Thompson showcased her electric speed, running into an open goal square in the second quarter. Her major was quickly followed by Phillips who nailed a goal off a couple of steps after receiving a free kick from about 20 out on a slight angle. Jess Foley dominated in the ruck, tapping the ball down to the advantage of her teammates while Chloe Scheer took a hug grab in the second quarter, wheeling and going long to Ponter who ran into an open goal and nailed yet another one for the Crows. Ponter slotted her second goal for the quarter after finding herself in the goal square, taking a big contested mark against her opponent. Eloise Jones put on the afterburners going for a run down the wing and drilling a pass to none other than Danielle Ponter who bagged her third consecutive goal. For the Blues, Sarah Hosking worked tirelessly throughout the quarter, while after a quiet start, Tayla Harris got a bit more involved when the ball came down her way. Captain, Brianna Davey steadied the ship before half time converting from about 35 out on a slight angle.

Third quarter saw a lift in intensity from the Blues, laying some strong tackles and hitting targets across the ground. They kept the Crows to only one goal for the term with plenty of the play happening around their attacking 50 but were unable to find the scoreboard. Darcy Vescio injected herself into the game, picking up some good touches across the ground. Chelsea Randall was a real general down back controlling the airways and worked exceptionally well in tandem with Sarah Allen, who proved to be a lynchpin in defence. With the Crows up and about Erin Phillips took centre stage once again with a strong lead and an impressive goal. But minutes later the Adelaide playmaker was helped from the ground with a knee injury.

It was a tight tussle in the last quarter with neither side able to nail a major in the final term. But in the end, it was the Adelaide defence that proved to be hard to overcome, while their work through the midfield was second to none credit to their smooth movement and impeccable vision. Crows stars Ebony Marinoff and Courtney Cramey were inspirational across the ground doing the one percenters well. Though it was a disappointing for the Blues the likes of Nicola Stevens and Alison Downie stood up.