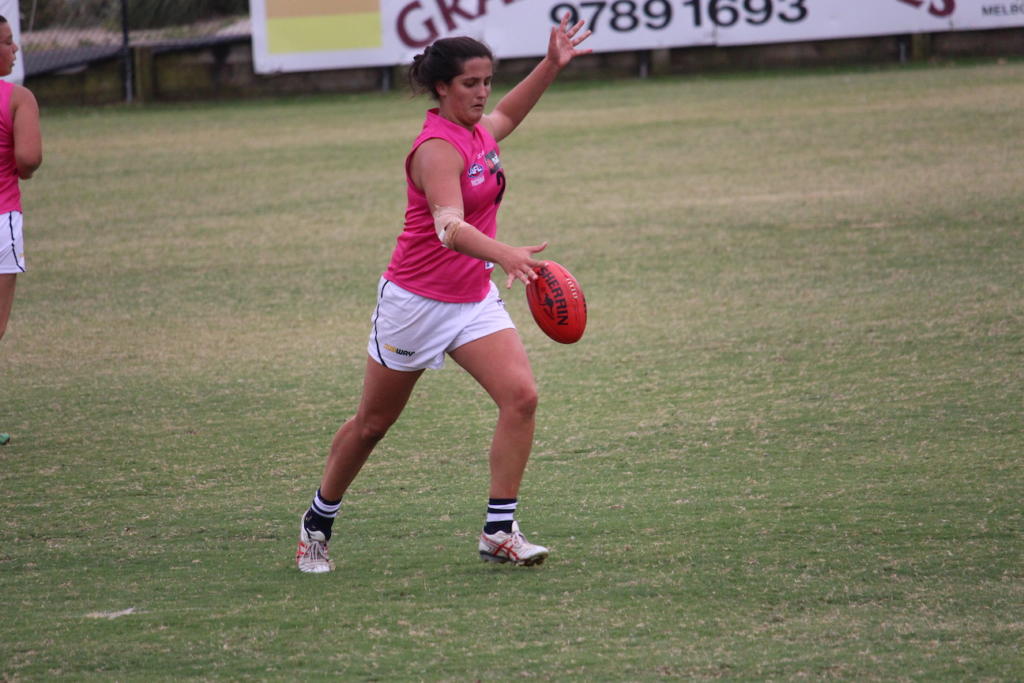 WITH the NAB League Girls competition ladder taking shape, some teams are looking to break away on top of the table, while others are still searching for their first victory. With the six games on the weekend across six different venues, it makes for some interesting viewing for spectators.

The first game of the round sees the unbeaten Northern Knights taking on the winless Sandringham Dragons. The Knights were forced to share the points with Oakleigh in Round 1, but were able to secure two victories either side of the draw against Murray Bushrangers and Western Jets. Gabby Newton has been a standout performer this season, averagine 19 disposals, 2.3 marks and 3.3 tackles per game, while Britney Gutknecht has been damaging inside 50, with five goals from her three matches as well as 18.3 disposals and 3.7 tackles per game. The Dragons have been competitive for large patches of their game but have struggled to score, booting one goal in each of their three games, while missing chances they would like to take again. Their defence and midfield will match up with the best sides, with Alice Burke averaging a massive nine tackles per game as well as 16.3 disposals and 2.7 marks. Nayeley Borg and Sarah Hartwig have combined for 24 rebounds between them in their three games, while Marguerite Purcell has been crucial along the wings for Sandringham, recording 11 inside 50s, while Knights’ midfielder Ellie McKenzie has averaged 15.7 disposals, 2.3 marks and 3.3 tackles. Northern is a team to beat this season and noone has managed to secure the four points against them, so they will head in favourites, but the Dragons could apply that defensive pressure to try and force it into a slog and get the game on their terms.

Up in Wangaratta, Murray Bushrangers host Bendigo Pioneers at Norm Minns Oval. The Bushrangers were badly beaten in the first round by the Knights, but have since responded with back-to-back wins against the Western Jets and Gippsland Power. Both of those sides are winless from three games, so it will be a great test to see where the Bushrangers are at against a competitive Bendigo Pioneers outfit. The Pioneers went down narrowly to the Greater Western Victoria (GWV) Rebels in Round 1 before posting a win against Eastern Ranges in Round 2 and being outclassed by the reigning premiers, Geelong Falcons. Bendigo is a side that will bring teriffic defensive pressure, with Brooke Hards (7.7 tackles per game) and Dakota Villiva (7.3) both in the top three tacklers in the league. They are not a high possession team, but Elizabeth Snell (15.7 disposals) and Maeve Tupper (15.3) know how to find the ball, while bottom-ager Tara Slender leads the league in rebounds with 16 in her three games. For the Bushrangers, Abby Favell has been consistent in the opening three rounds, recording 4.7 marks per game – the second most of any player – as well as 11.3 disposals. Olivia Barber is not a high possession winner, but the key position player has managed 3.3 marks from seven disposals and a goal per game, while having a number of attempts as well and she will be sorely missed in the Bushrangers’ attack this weekend. Millie Brown has now played the two games after missing Round 1 and averages the most touches of any Bushranger with 16.5 per game. This is a genuine 50-50 game and the panel were split as to which way to go with the tipping as both teams are a genuine chance in this clash.

Up in Craigieburn, the Western Jets are searching for their first win, while Eastern Ranges look to make it two on the trot after going down in Round 2 to Bendigo Pioneers. In the corresponding game last year between these sides, the Jets won their only match of the competition against a highly fancied Ranges outfit, downing them in Williamstown with a super come-from-behind victory. The win derailed Eastern’s season and gave the Jets plenty of confidence going into the remaining games of the season. Both sides have some top-end talent in this match with Western captain, Elisabeth Georgostathis leading from the front this season averaging 19.7 disposals, two marks and three tackles per game, having also spent time at half-back recording 14 rebounds to be equal third in the competition for the statistic. Potential Western Bulldogs father-daughter selection, Isabella Grant has enjoyed a strong season with 15 touches, two marks and 3.3 tackles per game, while Cleo Saxon-Jones has taken 2.3 marks per game presenting as a key forward, while also recording 11 disposals and three hitouts per match. For Eastern, potential Collingwood father-daughter selection, Tarni Brown is progressing nicely with another year left in the system, averaging 19.7 disposals and two marks per game, but it is her tackling that catches the eye, laying a whopping 6.7 per match. Tess Flintoff and Olivia Meagher have also been amongst the best few each week, averaging 17 disposals per game, with Meagher also averaging 2.7 tackles, while Flintoff finds space for 3.3 inside 50s and 5.3 marks. Eastern will head into the clash as favourites having ground out two wins already this season, but the Jets showed last year they are capable of an upset on their day.

The reigning premiers are heading up the highway to Ballarat to take on the GWV Rebels to try and extend their winning streak to four. For the Rebels, they defeated the Pioneers in Round 1 but have since gone down to Calder Cannons and Dandenong Stingrays on their home turf at MARS Stadium. With this game originally scheduled for Colac Reserve and moved to City Oval, the Rebels will enjoy a closer trip and will want to test themselves against the Falcons. Lucy McEvoy has been in unbelievable form this season for Geelong, averaging 23.3 disposals, 3.3 marks, six inside 50s and 7.7 tackles per game, topping the league in two of those stats. Luka Lesosky-Hay has been great support for McEvoy with 21.3 disposals, two marks and five tackles per game, as well as 3.6 inside 50s per game. Two Falcons who have stood up this season are Darcy Moloney and Laura Gardiner with Gardiner laying seven tackles per game as well as 18 touches through the midfield, while Moloney has got free for 19 disposals and 2.3 marks per game. The second highest disposal winner after McEvoy is her opposing captain with Sophie Molan registering 21.7 disposals per game as well as 4.3 tackles and getting forward to boot three goals this season – two last week. With Ella Wood missing this week, Chloe Leonard will become important in sharing the midfield load, having averaged 16 disposals and 4.7 tackles per game. Along with Molan, Renee Saulitis has managed to hit the scoreboard three times while Lauren Sykes has been important in defence with eight rebounds so far this season. A huge inclusion is that of Maggie Caris, averaging a competition high average of 29.5 hitouts per game, 12.5 more than her closest opponent and will sure be an asset in the ruck. The Falcons are expected to continue their winning ways in this game, but the Rebels will enjoy the challenge and aim to match them in the midfield.

With the sun setting in the west, Gippsland Power hosts Dandenong Stingrays in the east as the Power hopes to get on the board in season 2019, while Dandenong intend to make it three on the trot after back-to-back victories over Sandringham Dragons and GWV Rebels both away from home. In a super day of football, the game will be the fourth match of the day at Morwell, and a tough task for the Power minus Nikia Webber. They do have some great future talents with a defensive duo of Matilda Van Berkel and Maddison Shaw making life difficult for forwards, recoding 22 rebounds between them so far this season. Grace McRae and Megan Fitzsimon have been able to find the ball enough both averaging 13.7 disposals and laying 7.7 tackles per game. The Stingrays have an even squad across the park with plenty of standouts, none less talked about that St Kilda pre-listed duo of Isabella Shannon and Molly McDonald. Shannon has averaged 17.3 disposals, 2.7 marks, 6.7 tackles and 1.3 goals per game, while McDonald has laid four tackles and booted two goals to go with 12.5 disposals per game. Outside the two highly fancied top-agers, Brooke Vernon has been one of the best defenders in the competition this season, averaging 4.3 rebounds as well as 14 disposals and three marks, while Tyanna Smith has been important on the inside with 16 disposals, 4.3 tackles and 3.6 inside 50s per game. The Stingrays will be favourites in this clash to make it three consecutive wins, but the Power will have plenty of home crowd support.

The final match of the round is one of the best with the undefeated Calder Cannons taking on the much improved Oakleigh Chargers. The Cannons have knocked off Western Jets, GWV Rebels and Sandringham Dragons in the first three rounds, but the three sides have combined for just the one win this season so the Chargers will present a big challenge to the Cannons. Calder’s pursuit for four consecutive wins will be made harder without Georgie Prespakis who sensationally booted seven goals in Round 2 and was best on ground in the opening two rounds. Georgia Patrikios has stood tall in her two games as expected, averaging 21 disposals, four marks, two tackles and 5.5 inside 50s. She will be crucial in the Cannons quest for a third win with Oakleigh’s strength lying in their outside run. Gemma Lagioia (14.3 disposals, 3.3 inside 50s) could well be an opponent for Patrikios with the two among the best kicks in the league and are great movers around the field. Mimi Hill (15.3 disposals, 2.7 marks and 3.7 tackles) has been great off half-back and along the wing for the Chargers and could provide important rebound for the Chargers in a game where their opponents have plenty of attacking options. With Prespakis out, Emily Harley has a chance to take the outright lead in the goalkicking, booting eight goals in her three games while also getting involved up the ground with 13 touches and 3.7 marks. The Cannons have an advantage in the ruck with Georgie Sampson averaging 17 hitouts per game, the second highest in the competition. Both sides are evenly matched but the way the Chargers pushed the Knights they are capable of inflicting the Cannons’ first defeat, however Calder has just found a way each and every week even when challenged.