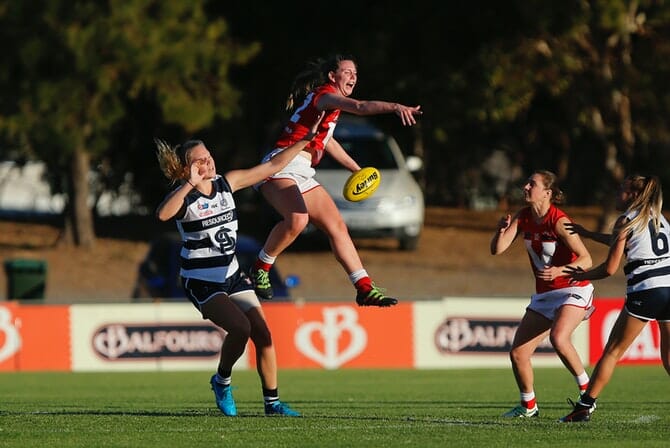 FOUR rounds down and the South Australian National Football League (SANFL) Women’s competition ladder is starting to take shape. Norwood remains the only undefeated team and takes on West Adelaide in what should be a terrific clash, while Central District and North Adelaide looms as another tight encounter.

In the first game of a triple header at Coopers Stadium, the winless Sturt takes on Glenelg, a side seething from its first loss of the season last week. The Tigers will be keen to bounce back from the defeat at the hands of West Adelaide and regain ascendancy in the mid-table logjam. The Tigers have brought in four players to the side with ruck, Lauren Bungey and key defender, Olivia Walker-Obushak among those returning to the fold. The Double Blues have been forced to make some changes with Izzy Kuiper out due to injury, Jessie Keech out to play softball and Alexandra Ballard also omitted from the side. Into the team comes full-forward, Caroline Burgess in a bid to try and create more scoring power, and defender Brooke-Lee Chaplin. Glenelg will be the favourites in this game to bounce back from a rare los and hand Sturt its fifth consecutive defeat, however the Double Blues have been competitive across the board this season and would be edging towards a victory sooner rather than later.

In the Game of the Week, top-of-the-table Norwood takes on fourth placed West Adelaide in a vital game for shaping the top four early in the season. The Bloods are one of three teams with a 3-1 win-loss record and victory would be crucial in getting an upperhand on their rivals. The undefeated Redlegs have made three confirmed changes, with Elisha Gallagher and Rhiannon Busch key outs as they have army duties, while Zoe Greer will miss through injury. Into the side comes forward, Tara Robertson, GWS GIANTS defender, Ebony O’Dea and Crows’ onballer Sally Riley. For the Bloods, They have brought in four players to an extended team, including full-back Jacalyn Pickering and defender Emma Smith. Norwood deservedly head in as favourites and are expected to continue their undefeated run, but the Bloods knocked off Glenelg last week in a low-scoring contest, so could have the defensive ability to restrict the Redlegs. Riley, Monique Hollick and Najwa Allen is a formidable midfield, while O’Dea and Sophie Armitstead provide good rebound out of attack. For the Westies, Abbie Ballard has been a shining light in the midfield, while Maddie Newman and Chelsea Biddell have been others to watch this season.

In the final game of the double header at Coopers Stadium, the in-form Central District faces North Adelaide. The Bulldogs have won back-to-back games against the Eagles and Double Blues and will look to make it three on the trot against North Adelaide. The Roosters have had a tough draw to start the season and are unlucky to have just one win from four games. Victory would see North Adelaide have a chance of overtaking the Bulldogs, while also keeping the bottom two at arms-length. With more of a favourable draw coming up in the future, the Roosters could get on a roll. For the Round 5 match, just the combined two changes have been made with Alex Fittridge and Elysha Willis coming into the Roosters’ line-up, while four players have been added to an extended bench for Central District. This could be the game of the round if both teams play at their best, with firepower and consistent players across the field. Katelyn Rosenzweig has been a lively point at full-forward this season, while Jessica Sedunary has serious abiloty. Abbey Scheer and Demi Sonneman have been consistent so far this season, while Jayme-Lee Sonneman has stood tall in the ruck. For North Adelaide, Amber Ward has been a rebounding machine in defence, Kelly Barltrop has been a target up forward, while Leah Tynan, Nadia Von Bertouch and Rheanne Lugg have made a formidable midfield trio. North Adelaide could be considered favourites given their experience, but the Bulldogs have the confidence after stringing two wins together and the scoring power to make it three.

The final game of the round has reigning premiers South Adelaide coming up against a Woodville-West Torrens side that has been forced into making changes. The Panthers head into the game with a loss to Norwood the only blemish this season, having not put a foot wrong since then. The Eagles are still searching for their first win this season and team selection has not helped them. Sarah Perkins and key midfielder, Jaimi Tabb are unavailable, while Chloe Forby was suspended and Natalie Subelli forced out due to concussion. Add in the omissions of Taylor Hand and Amie Blanden and the Eagles head into the match with at least six different players to last round. Cassandra Glover will look to replace Perkins up forward, Georgia Taylor returns to the side to help out the defence as will Colbie Frankland. South Adelaide also lose a crucial player with Nikki Gore out due to AFL Women’s duties with Adelaide’s preliminary final against Geelong, while Alana Browne will miss due to a hamstring. The Panthers have brought four players into the mix, with Tonia Fielke slotting on a wing to replace Gore. The Panthers midfield might be missing Gore, but with Hannah Munyard, Czenya Cavouras, Elyse Haussen and Nicole Campbell in the team, it will make life difficult for the Eagles. Rachel Dunstan and Natasha Farrier are potential match-winners, while Kiana Lee will shoulder the load up forward and has plenty of talent. Stephanie Walker‘s work in defence is also important in this game as they look to cause an upset. Woodville-West Torrens will need to bring the heat for four quarters as the Panthers are an impressive outfit, but anything can happen on the right day.