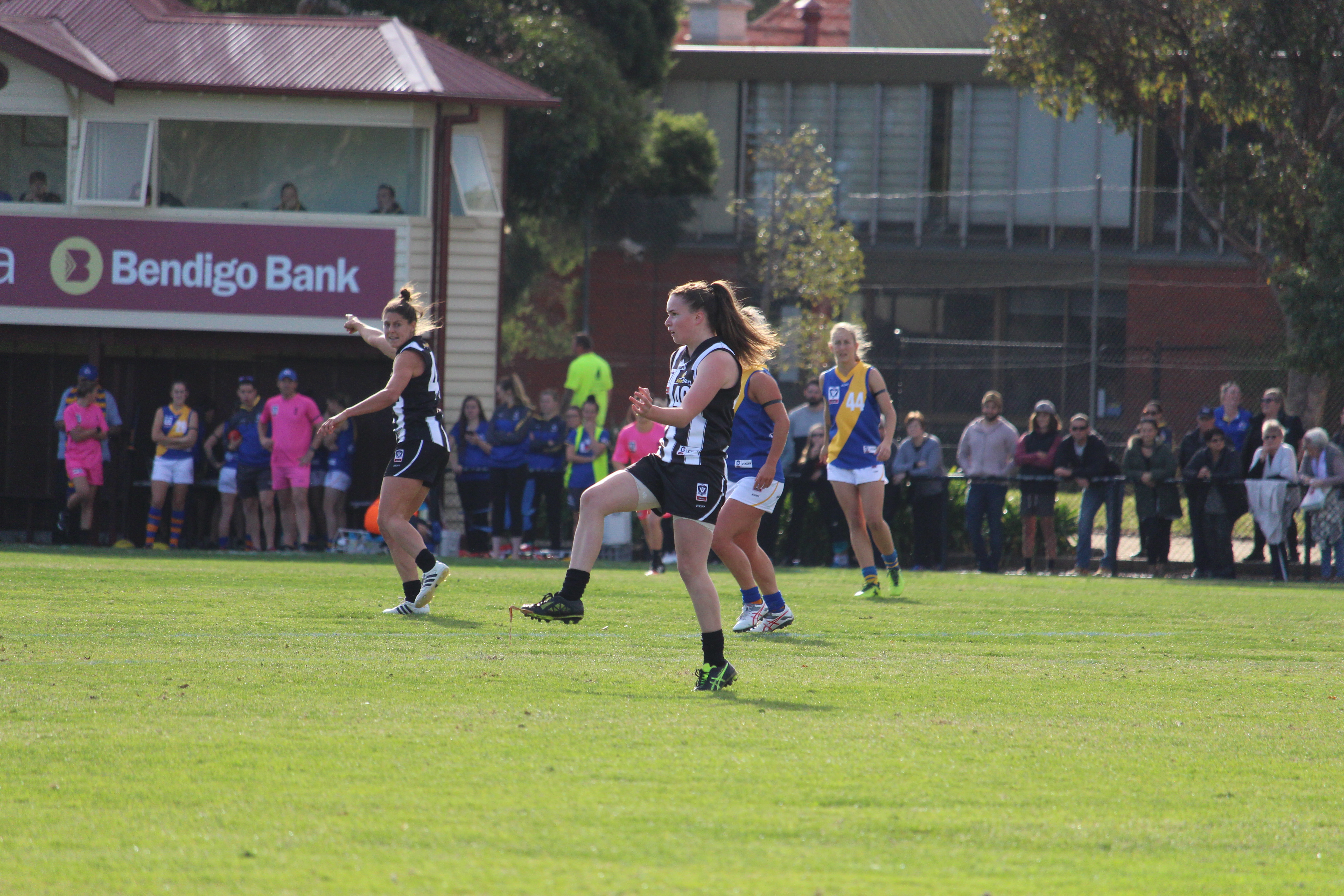 IN Round 4 of the AFL Women’s, Adelaide’s Danielle Ponter and Collingwood’s Sarah Dargan joined the list of growing Rising Stars in the competition after impressive performances on the weekend.

Adelaide: Danielle Ponter
Ponter was well deserving of her Round 4 Rising Star nomination in Adelaide’s victory over Fremantle. As Adelaide’s first nomination this season, Ponter took centre stage with two majors and a 90 per cent disposal efficiency on her home turf in Darwin. She also secured eight disposals and a mark in her first stint up forward. Teammate, Jess Foley (24 hit-outs, 13 disposals, five marks, two clearances and five inside 50s), also continued her elite form as she finishes second in the league for hit-outs.

Brisbane: McKenzie Dowrick
The Grand Final rematch went well in Brisbane’s favour as they kept the Bulldogs goalless in the first half. Along with teammate, Jesse Tawhaio-Wardlaw (12 disposals and six marks), Dowrick was both dominant in the air and in the contest. For the day she had 12 disposals, four marks and three tackles on her way to 58 AFL Fantasy Points. If Brisbane’s recruits continue to combine well, they could be the difference for a successful 2019 finals campaign.

Carlton: Madison Prespakis
Prespakis continues to be one of Carlton’s most dominant utilities, impressing in the loss. With both teams underwhelming on the scoreboard, the No. 3 pick showed she’s nothing if not consistent as she picked up a game-high 19 disposals, one mark and three tackles along the way to 67 AFL Fantasy Points. At the rate she’s progressing, it might be possible for her to snag the Rising Star Award and the AFLW Best and Fairest trophy in consecutive years. She is easily the frontrunner for the latter, but also shouldn’t be ruled out for either as the continues to put up great numbers.

Collingwood: Sarah Dargan
The hardnut midfielder is getting better by the week, and in Round 4, she was handed a Rising Star nomination. Against the GWS GIANTS, Dargan racked up 16 disposals, two marks, six tackles and booted an important Collingwood goal. She was the second highest disposal winner from the Pies and has been a shining light in a disappointing season thus far.

Fremantle: Sabreena Duffy
With a final quarter blitz shaking Fremantle to their core, Duffy and Parris Laurie were treated to their first loss as Fremantle players. Of the two, Duffy had the most impact. Despite recording her lowest numbers of the season, Duffy endeavoured with seven disposals, three marks and two tackles. She tried her luck at a goal in the fourth but failed to find the middle. Laurie (eight disposals, two marks and one tackle) remained efficient in the loss.

Geelong: Olivia Purcell
Geelong’s hard ball winner continues to impress in Nina Morrison’s absence, propping up numbers all over the stat sheet. In the Round 4 victory she secured 14 possessions (nine contested), three clearances, three tackles and four inside 50s. Her work on the inside continues to impress, but her disposal efficiency (42 per cent) could improve.

GWS GIANTS: Yvonne Bonner
Not only has Bonner proven to be the GIANTS’ most dominant new prospect, at times she warrants comparisons with some of the league’s best. She is yet to be goalless this season, kicking her fourth career goal with elite goal sense. As a forward, she possesses a lot of the footy as she combines well in chains and hits up teammates in space. For the game she snagged nine disposals, one mark and one tackle. While not her most impressive game, she still deserves her place on this list.

Melbourne: Tyla Hanks
Hanks might have been one goal short of a Rising Star Nomination this week as she turned it on for Melbourne in a tight loss. The former Gippsland co-captain decisively made her case for Rising Star consideration with 12 disposals, one goal, two marks and three tackles on her way to 51 AFL Fantasy Points. This marks Hanks’ second goal and third consecutive game with over 10 disposals.

North Melbourne: Georgia Nanscawen
There was not a lot of first-year influence in North Melbourne’s fourth consecutive win, with most players recording under four disposals with low disposal efficiency. Nanscawen was the best of the crop with four disposals, one mark and one tackle. In her first year, the 26-year-old is still yet to breakout, though with a solid team around her, it could still happen this season.

Western Bulldogs: Aisling McCarthy
The Irish-born Bulldog was one of the few pillars who remained in their heavy loss. McCarthy had 12 disposals, two marks, two tackles and kicked her second career goal on her way to 53 AFL Fantasy Points. The change in codes has not seem to have dwindled her impact as she continues to get more comfortable in front of the sticks.