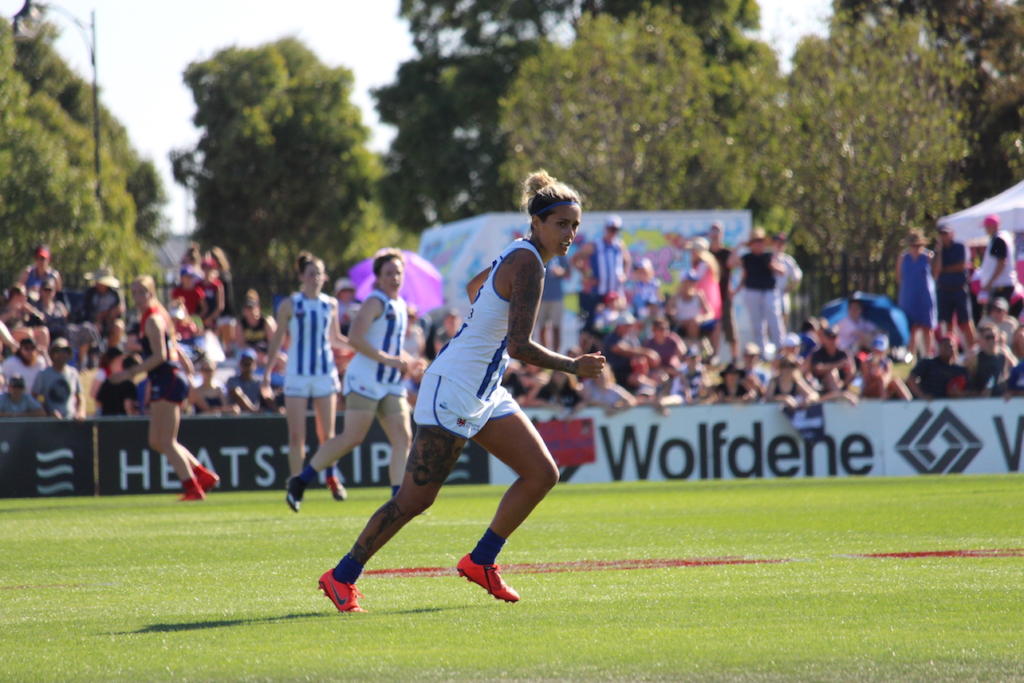 ROUND 4 was packed to the brim with exciting matches, with three teams winning by less than 10 points to close out the midway point of the season. North Melbourne got a shock this week when they took on a fighting Melbourne side at home, but are now the only team that has not dropped a game this season. Brisbane pulled a big win out in the final quarter against Bulldogs, while Collingwood has now lost four on the trot, essentially out of the running for finals with three rounds to go.

A first half shut-out and Carlton’s blues in front of goal were the difference as Geelong pounced onto another win to climb into Conference B’s top two.

The Cats showed their typical guile in defence, keeping the star-studded Blues forward line to just two points at the main break, while opening up a 14-point buffer thanks to goals from Phoebe McWilliams and Sophie Van de Heuvel. While they kept the clamps on to see Carlton only manage one goal for the game’s entirety, it was not without unintended aid from the travelling side – encapsulated by two close-range misses from Tayla Harris in the third term that could have otherwise turned the tide of the game. Veteran Katie Loynes had no such trouble as she got Carlton on the board in the same stanza as the Blues pushed to snatch the lead. While Carlton managed to reverse the shut-out and restrict Geelong to three points in the second half, it was to no avail as the home side held on for its second win at GMHBA Stadium in as many tries.

Despite close attention from Blues skipper Bri Davey in the first half, McWilliams was one of the Cats’ best alongside the engine room prowess of Renee Garing and Maddy Keryk. Davey was thrown into the middle to combat their dominance after half time, and led the way from leading ball winners, Madison Prespakis and Kerryn Harrington – who stood up down back. Having leapfrogged their weekend opponents in Conference B, the Cats travel north in a top of the table clash against Brisbane, while the Blues host a winless Collingwood side on the same day.

In the 2018 grand final rematch, it was Brisbane’s time for reckoning. With momentum, belief and energy, the Lions not only beat a Conference A side, they made it clear they’re in with a real shot at this year’s flag.

Playing at home with the breeze behind them, the Bulldogs set forth very differently to last year’s brand of footy. Though they had plenty of the ball and won clearances, they were kept goalless in the first and second terms due to inefficiency. They could not apply their characteristic short chip game under the Lions’ precise attack on the ball and the ball carrier.

The action was fierce, with bodies on the line, but it was scrappy from both teams until the second term when the Lions made good use of the breeze, broke out of the congestion and started to convert. Close to half time, and 21 points down, it got desperate for the Dogs. They put Katie Brennan deep down back and the whole side in defence to stop the haemorrhaging and reset in the main break.

First half goals went to Jordan Zanchetta in the first term, along with Jess Wuetschner and Breanna Koenen in the second.

The Dogs tried to rally early in the third and looked to have upped the intensity. Yet even with a strengthening wind behind them, they were unable to make a different statement or post scoreboard pressure.

Opportunities for the Dogs went by in the second half. Monique Conti missed an easy goal and there were multiple poor deliveries into key forward Katie Brennan. Just when those opportunities looked to have really sailed and Nat Exon celebrated a huge goal for the Lions, the Dogs got their first, with a clever intercept from Aisling McCarthy and and easy goal.

As Bulldogs’ prime midfield mover Ellie Blackburn was taken down the race with a knock to the head, Brisbane finished out the match as though being in front at three quarter time is a regular thing.

They take on the Cats at home next week.

For the first time in 2019 a game was played at TIO Stadium in Darwin as Adelaide hosted Fremantle for the battle of Conference A. With a spectacular goal apiece for both teams in the first term and relatively even second and third quarters it looked like it was going to be a close match, however a final quarter onslaught from the Crows proved not only their strength in the competition, but their determination under pressure.

The Crows managed a convincing win over their fellow Conference A side, beating the Dockers 9.11 (65) to 3.5 (23), and delivering Fremantle’s first loss for the season.

Despite the loss, Fremantle’s Kiara Bowers and Dana Hooker put on a tackling show, picking up a combined 18 tackles of the Dockers’ 55. Bowers and Hooker were dominant for the Dockers, also picking up 19 and 16 touches respectively, while Evangeline Gooch picked up 17 touches and four marks.

Ashlee Atkins, Ebony Antonio and Kellie Gibson kicked a goal apiece, with Gibson kicking the opening goal of the match for the second week running.

Erin Phillips was dominant for the Crows, managing 25 touches, two goals and a behind to her name. Anne Hatchard and Ebony Marinoff were not far behind with 22 and 20 touches, respectively, while Eloise Jones, Stevie-Lee Thompson and Danielle Ponter each kicked another two goals to add to the tally. Thompson’s goal opened the scoring for the Crows, knocking down the goal umpire in what fortunately did not foreshadow the end result.

Adelaide dominated the hitouts, with Jessica Foley managing 24 of the 29 for her side alongside her five marks. Meanwhile teammate, Deni Varnhagen, and opposition, Stephanie Cain and Bowers also picked up five marks.

Round 4 proved to be do-or-die for both the Giants and the Pies as they each were without a win all season. The GIANTS were able to hold Collingwood down for majority of the game, keeping them from scoring in both the first and third quarters. This very well means the end for the Pies’ 2019 campaign, whereas GWS just holds on in conference pool B.

In an almost fairytale start for the Giants, Tait Mackrill opened the scoring with her first career goal 30 seconds into the game, with a terrific goal that dribbled through Collingwood’s backline. The Giants continued to take advantage of the strong winds, kicking another two goals within the first 8 minutes of play.

GWS were more than able to out play Collingwood on the ball throughout the game, having far greater possession. Key players like Rebecca Beeson and Alicia Eva were most reflective of this, both players having equal highest disposals (22). Beeson’s dominance in the fourth quarter as well as early in the game proved to be a foil for Collingwood’s forwardline.

Collingwood tried in earnest to make a late-comeback in the fourth, leading to a 27-36 deficit and keeping GWS scoreless for the quarter. For Collingwood, key players like Jaimee Lambert and Sarah Dargan were able to stand out despite the loss. Lambert (21 disposals and 7 tackles) and Dargan (six tackles and 1 goal) were both influential in Collingwood’s final dig at a win, but nevertheless it proved too little too late.

Next Sunday, Giants will host the Dees in their second conference cross-over match back in their home stadium. Whereas Collingwood face their all-time rivals, Carlton at the historical Ikon Park on the Saturday.

North Melbourne has survived its biggest threat yet in the AFL Women’s competition, to remain the only undefeated team from four rounds. The Kangaroos were challenged throughout the match, and were trailing as late as up until the seventh minute of the final term, before Emma King‘s third goal of the game put the visitors back in front to record a four-point win. Mo Hope converted the first goal of the game for North Melbourne, but the Dees through the unlikely goalkicker of Catherine Phillips, responded to trail by a point at quarter time. The second term belonged to the Roos as they piled on three goals, including two to King who was too tall at full-forward. After half-time, Melbourne booted the first two goals of the half including a running beauty to speedster, Aliesha Newman, and then a snap from former Gippsland Power co-captain, Tyla Hanks to hit the front momentarily. Hope’s second goal handed the Roos back the lead and while Newman’s second major in the final term gave the Dees a huge sniff, it was fitting that King was to eventually boot the winning goal.

Melbourne could consider itself very unlucky not to walk away with the points, having 45 more disposals, seven more marks and broke even in the clearances. Karen Paxman was terrific with 25 disposals, two marks and three tackles to be the Demons’ best alongside Lily Mithen (22 disposals, five marks and four tackles). Newman’s two goals up forward, and Tegan Cunningham‘s work rate inside 50 early was a treat, while Kate Hore was also impressive with 18 touches, three marks and three tackles. For North Melbourne, King was the clear difference between the teams with 3.1 from eight disposals and three marks, while Hope was lively throughout with the two goals from 10 touches and three marks. Jess Duffin was superb in the back half with 20 disposals and seven marks, while Jamie Stanton stood up on a wing with 21 touches, two marks and two tackles.