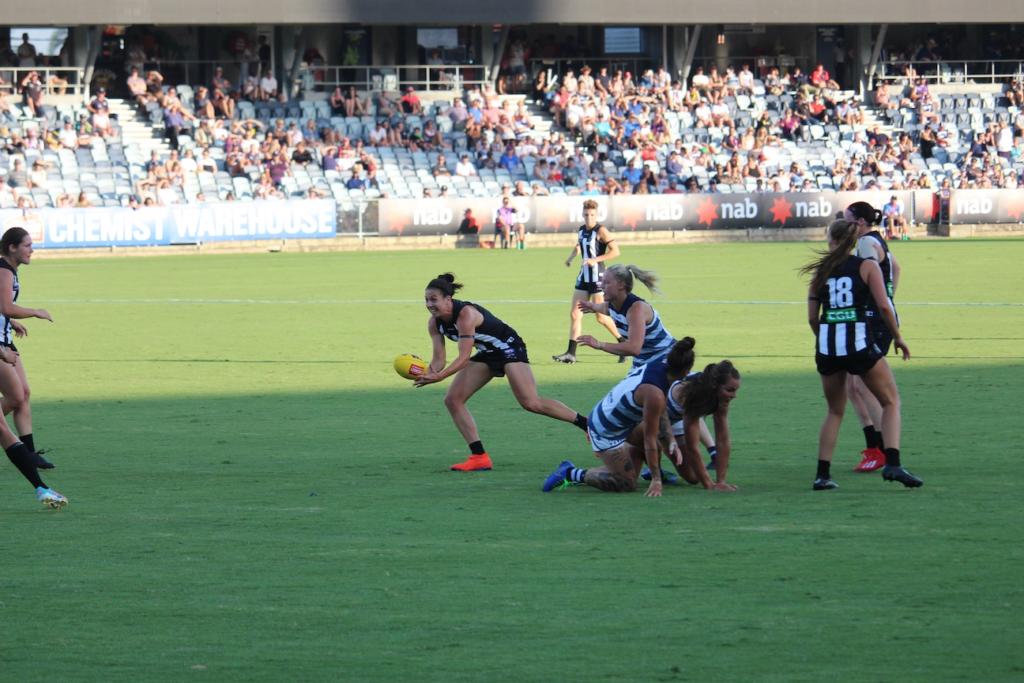 IN a round that certainly shook up the ladder, North Melbourne continued their outstanding form for the season, sitting on a comfortable 250.8 per cent to finish Round 3. Carlton put their first win on the board for 2019 with a convincing win over GWS GIANTS, while Conference A’s bottom, Melbourne, took on Conference B’s top, Brisbane, in a match that proved the difference between the two conferences.

North Melbourne has emerged as favourites for the 2019 AFLW flag after a great start to the season. The Kangaroos won their third straight match with a comfortable 31-point win over the Western Bulldogs. Kangaroo, Courteney Munn helped inspire the victory with a dominant debut match kicking four goals. Captain, Emma Kearney took control of the midfield against her former side, collecting 17 disposals.

It was a slow start to the match, with the first goal of the game not coming until the fourth minute of the second quarter through Roos debutant, Munn. She continued to impress, kicking a second goal mere minutes later. Munn kicked two more late goals, including one dribbled home from the boundary putting an exclamation mark on a great start to the season for the Kangaroos.

Along with Munn’s two early goals, North kicked five unanswered majors in the second term to create a thirty-point buffer against the Bulldogs, ultimately putting an end to the match. It took until the third quarter for the Bulldogs to kick their first goal of the night through Ash Utri. This spurred a more competitive second half from the Dogs, although it was too little too late as they could not overcome the first half deficit.

North Melbourne will play in Victoria for the first time next week, against Melbourne at home next Sunday afternoon. Meanwhile, the Western Bulldogs have a chance to get back on the winners list next week when they host the Brisbane Lions.

A revitalised Carlton leave the track victorious following a comprehensive showing at Blacktown over GWS. Both teams started Saturday without a win, but Carlton have seemingly revived their chances for finals footy as GWS slips further away. In the congestion, Carlton won a lot of the hard ball and contested well in the air with Tayla Harris on the receiving end. Their intense brand of offensive football rocked GWS and set the pace for the game early. Despite the GIANTS having a few glimpses, the Blues kept history from repeating itself and remained focused on how they wanted to play.

Carlton secured the first goal off a GWS kick-in and subsequent mark infringement. Gabriella Pound was awarded the 50m and secured her first in front of the sticks. Soon after, Harris kicked her first from an advantage call, running in on an angle to increase Carlton’s lead. The GIANTS responded by playing tighter on the football – keeping both sides goalless for seven minutes. The GIANTS hit their first major at the end of the first term with a scoop and snap by Jacinda Barclay, shortening the margin to seven-points as they entered the second.

Darcy Vescio kicked her first directly in front to start the second. She immediately followed up with a mark and kick to first-year, Madison Prespakis to get her first for the day. While Carlton quickly increased the lead, Yvonne Bonner and Cora Staunton restored the GIANTS’ momentum with a goal each in succession to return the margin to seven points. Prespakis and Harris combined twice in the final minutes to help them secure a goal each, with Prespakis first hitting Harris on the lead, while in the closing seconds Harris returned the favour, giving Prespakis a run-on goal.

In the second half, Bonner opened the forward line for the Giants, assisting Christina Bernardi with two goals, while Harris and Prespakis closed out the final quarter with their respective third goals for the game. GWS trailed for the second half but could not crack above Carlton’s scoring and compete with their numbers around the ball.

Prespakis has notched it up another level. Her performance on the track might be the best of the weekend, with a game-high 21 disposals and career-high three goals. Harris (nine disposals and six marks) was a pillar for Carlton up forward, also kicking three goals. While on the opposite end, Bonner (one goal, 13 disposals and eight marks) and Bernardi (two goals, 10 disposals and five tackles) cleaned up for the Giants.

This match marks a new beginning for Carlton and may even spark a finals campaign. For the GIANTS, there is a lot of work to be done if they plan on salvaging this season.

Fremantle kept its undefeated streak alive with a resounding victory over the winless Magpies. The Dockers started well with the breeze at their backs as season one marquee, Kellie Gibson slotted a goal with less than 40 seconds taken from the clock, setting a ruthless tone for the encounter. Magpie vice-captain, Britt Bonnici missed the chance to hit straight back and Ebony Antonio made the Magpies pay with a clinical finish to a breakneck defensive transition.

That minute-passage was a perfect window into the game as a whole, with the Magpies getting plenty of the ball forward of centre but not being able to capitalise. That lack of a finishing touch or clear link into forward 50 was a sore spot for the travelling side despite Sophie Alexander’s inclusion, and it showed in a goalless first half. Fremantle’s 31-point half time lead was extended to 33 in a more even second half, with Sarah D’Arcy slotting Collingwood’s first goal halfway through the third stanza on the back of two 50-metre penalties.

Antonio and Gibson dealt the most damage with two goals each as the only multiple goal kickers, while D’Arcy and Jaimee Lambert were the only Pies to trouble the scorers. D’Arcy was their best, while Bonnici played a good role on Dana Hooker in the midfield and Ash Brazill continued her outstanding defensive form. Leading ball-winner, Kara Donnellan was again Freo’s best, aided by Paris Laurie and Kiara Bowers.

Collingwood now has perhaps its best opportunity to get on the board in 2019 as the Pies host fellow winless side, GWS in a game that could see them scrape off the bottom of Conference B. The Dockers hit the road to face a Crows side coming into form, hoping to maintain their flawless record and a spot in Conference A’s top two.

Heartbreak continued for Geelong after being crushed by a superior Adelaide side. In what started as a close game, with the Crows leading by only one-point early in the second quarter, it did not take long for the elite side to end the half leading by 28.

As the match continued, the Cats could not keep up with Adelaide, going nearly 45 minutes without putting up a score. Goals by Danielle Orr and Kate Darby late in the third gave Geelong possible hope, but it proved to be too little too late.

Geelong struggled against Adelaide’s tight midfield and paid the price more than a few times against a more experienced backline. The Crows were to be too much for the newcomers, who despite putting up a good fight were no match for Adelaide’s efficiency and skill in front of the goals.

Crows captain, Erin Phillips led with a dominating performance putting 19 points (3 goals, 1 behind) on the board for her team. Tough midfielder, Ebony Marinoff was on fire breaking records within the Crows with 33 disposals. Anne Hatchard had another exceptional game with 27 touches as well as kicking a goal.

Despite the continued bad luck for Geelong, young gun, Olivia Purcell had a phenomenal moment on the ball, kicking a fantastic goal early in the second quarter by sidestepping an Adelaide defender and getting herself wide open. Richelle Cranston’s first game for the Cats wasn’t the win that was desired but she still demonstrated why she’s a high-impact player, leading her team with 18 disposals.

Melbourne dominated from the get go, nailing seven goals in the opening half to the Lions’ one. The Demons attacked the footy with speed and intent, helping them to secure their second win for the season. Brisbane struggled to combat Melbourne’s offensive pressure with the Dees using their quick hands and clever kicks into space to create scoring opportunities.

After a dominant performance last week, Elise O’Dea starred once again for the Demons, amassing plenty of touches while her partner in crime, Karen Paxman also dominated slotting a goal and getting her hands to plenty of the ball. Young gun, Tyla Hanks also impressed on the big stage taking it up to the Lions with her clever kicks into space and clean hands. Up forward speedster, Aliesha Newman stamped her authority on the competition slotting three goals. Newman showed off her speed and impressive football smarts to evade tacklers and get into the right positions. Bianca Jakobsson also starred across the field racking up plenty of touches and contributing on the scoreboard with two majors.

Star Brisbane forward, Sabrina Frederick-Traub struggled against the defensive pressure of the Dees, while the experience of Nat Exon shone through working hard to win the footy and nailing a good goal to keep her side in the contest. Alexandra Anderson was the major ball winner for the Lions, going in hard to win the footy and laying plenty of tackles. Veteran, Kate Lutkins was also a standout for Brisbane in what was a disappointing outing, using the ball efficiently and cleverly.