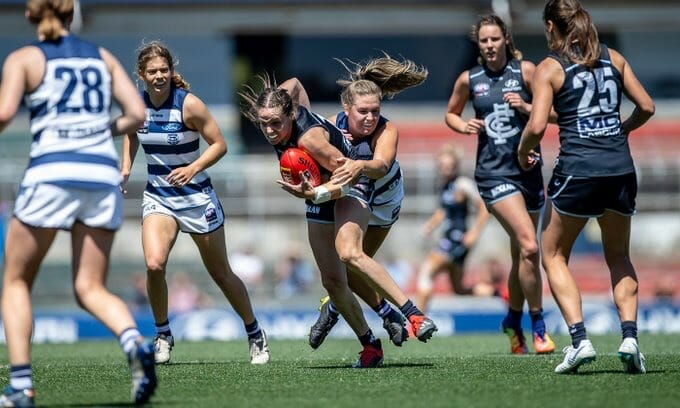 FOOTY is back and it was welcomed by five AFL Women’s practice games on Saturday, which allowed fans to witness how teams were shaping up ahead of the AFLW’s season. While the results were secondary, there were plenty of eye-catching moments across the country with three games in Victoria, one in Queensland and one in the Northern Territory.

We take a look at how each game went down:

GWS could end up being a sneaky chance for the flag in 2019 if their form in the pre-season is anything to go by. Sliding up the radar perfectly and with no Phoebe McWilliams for the upcoming season, the GIANTS went about their business in terrific fashion, manufacturing goals from multiple sources, with Aimee Schmidt and Cora Staunton booting three apiece.

We have seen first hand the embarrassment of riches that Brisbane has at its disposal in Queensland, albeit having to share the youngsters once the Gold Coast side enters the competition in 12 months. On the weekend there was the likes of McKenzie Dowrick – who booted a goal on debut – and fellow All Australian, Lauren Bella who started in the ruck going up against another All Australian, but that at senior level in Erin McKinnon. A terrific showing of faith from coach, Craig Starcevich.

3 Cross-coders are as impressive as ever

You need not look far, but the likes of Taylah Davies, a former GWS GIANTS netballer was really strong in the air and looked at home with the oblong ball. With Staunton already showing the success of international recruits to the game, it will be great to see how many of the former netballers, basketballers and other sporting stars, can have an impact in season 2019.

1 Brianna Davey is a star

In case anyone had forgotten what the Carlton captain was capable of, the star midfielder who missed the bulk of the 2018 season played forward and was a standout. She booted four goals across the game and was a lively target, shaping as a third option outside of dynamo, Darcy Vescio and tall timber, Tayla Harris inside 50 for the Blues.

2 Phoebe McWilliams will cause serious headaches

Much like Davey, McWilliams is as damaging at ground level as she is in the air, and she showed it in her first game in the blue and white hoops. Since crossing from the GWS GIANTS in the off-season, McWilliams enjoyed a VFL Women’s premiership with Hawthorn, ironically against her new teammates. She fitted in well and looms as a potential leading goal kicker now the midfield kicking to her has some serious depth.

We have promoted their abilities for the past 12 months, but Madison Prespakis and Nina Morrison let their football do the talking in the match at Ikon Park. Prespakis was judged one of the best on-field, copping a hit and bouncing back, while Morrison was exciting and enjoyed a win with her new teammates. Prespakis and Morrison could be the AFL Women’s equivalent debate of Marcus Bontempelli and Patrick Cripps – both stars in their own way and huge futures for their respective clubs.

It is something the fans of the AFL Women’s competition feared when North Melbourne assembled a “dream team” of sorts, picking up reigning league best and fairest winner, Emma Kearney, and key Collingwood players in Mo Hope, Jasmine Garner, Emma King and Jess Duffin among others. While Duffin was out playing for the Renegades, the Kangaroos had no troubles kicking a winning score. At first they did not manage to find the flow, but then booted six goals in the third term to storm away with the match.

The Demons have lost one of the biggest names of the AFL Women’s competition – and she never even left the club. Daisy Pearce will sit out the 2019 season while she is pregnant with twins, and the Demons will search to fill that hole with a host of young up-and-coming players. They have recruited well with Tyla Hanks and Maddy Brancatisano among those who could step up into the Dees’ midfield, but the experienced side will just take a bit of time with a number of fresh faces coming through. Fatigue was another factor, according to Harriet Cordner, but Melbourne will still be a tough assignment this season.

3 Kangaroos forward line the best in the business

They might be brand new, but the fact VFL Women’s talents, Sophie Abbatangelo and Ash Riddell stepped up and showed no fear upon their senior level debuts shows even North Melbourne’s next tier of players will provide great depth in season 2019. While much is talked about their high profile recruits, adding in those players along with young talents, Daisy Bateman – who kicked the opening Roos’ goal – and Chloe and Libby Haines, shows that the side will have the depth to cover any injuries to their top stars.

1 Western Bulldogs will be force again

While the Magpies do not have a great deal of support in regards to their flag chances, the Western Bulldogs looked ultra-impressive in their seven-point win over the Pies, having the ability to rest co-captain Ellie Blackburn in the second half after a superb first half. They shared the goals around and used precision kicking to hurt the Magpies.

They were always going to be inexperienced compared to the reigning premiers, but the Magpies draftees were impressive throughout the loss. Dandenong Stingrays’ skipper, Jordyn Allen and Oakleigh Chargers talent, Katie Lynch were a couple of names raised by coach Wayne Siekman after the game, while cross-coders Sarah Rowe and Sharni Layton were very competitive in the forward half.

Leading goalscorer, and forward dynamo Brooke Lochland caused some worry amongst Dogs fans when she was taken from the field after a collision. While full results were yet to come at the time of publication, AFL Women’s reporter Sarah Black believed it was not as serious as first thought.

1 Danielle Ponter and Chloe Scheer impact at either end

Young guns, Danielle Ponter and Chloe Scheer gave an indication they will be key players in Matthew Clarke’s Adelaide side this season, playing roles at either end. Ponter’s work out of defence using her slick skills to hit-up targets is different from her forward craft with Essendon VFL Women’s side, while Scheer was prolific up forward booting a goal and returning successfully from a knee injury that kept her from being drafted following her top-age year.

2 Fremantle will be competitive

With the amount of changes the Dockers have had, particularly with experience heading out the door and young talents walking in, it was always going to be tough against a premiership contender in challenging conditions. They looked solid early, but were outclassed in the third term before holding firm in the final stanza to avoid a blowout. The Dockers are a side that will be introducing plenty of new faces to the side in season 2019, so expect there to be some mixed results.

The win was somewhat soured by tall Crows, Rhiannon Metcalfe and Jasmyn Hewett, as they were forced from the field and will undergo scans during the week. It was the position that the Crows could ill-afford to lose, and will be sweating on the results. Given how strong the Crows are through the midfield, Adelaide will be keen to have a dominant force in the ruck giving the onballers first touch.