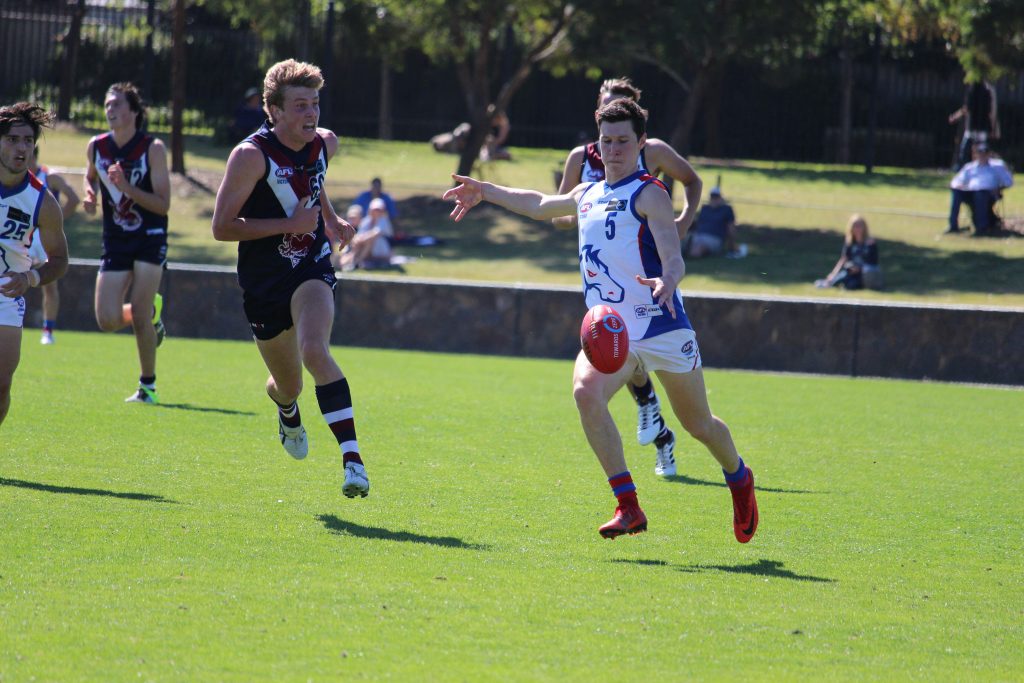 REIGNING premiers, West Coast Eagles were able to top up certain areas across the ground, picking up an outside midfielder, inside midfielder, small forward and a couple of key position forwards who can pinch hit in the ruck. They also managed to snatch readymade Collingwood defender, Josh Smith who has experience he can add to a young group in defence.

Oakleigh Chargers’ midfielder, Xavier O’Neill was an initial surprise invite to the National Draft Combine, having missed selection for the National Under 18 Championships. The disappointment for O’Neill was quickly put aside as he put together a very consistent season along the wing and through the midfield, then showed off his top athletic abilities at the combine. He shared the kicking test honours and was terrific in the 20m sprint as well, with West Coast likely to use his speed and skill through the midfield. He might have been a surprise bolter on the night, but speed and skill has been a key focus for clubs in recent years, and O’Neill certainly ticks those boxes.

An overager who did not even nominate for the 2017 AFL National Draft after a disappointing top-age year, came back and pieced together a really impressive season which shot his name up into draft calculations. He earned a spot in Western Australia’s state side for the National Under 18 Championships, and then dominated the Colts for Subiaco, also slotting into the WAFL Colts Team of the Year. He was predicted to go in the first two rounds and it was no surprise to see the local clearance winner and accumulator plucked out by the Eagles, as a readymade player who can walk into the premiers’ midfield, or forward line, if fit.

Touted as a first round prospect at the start of the year, Dandenong Stingrays tall, Bailey Williams slid to the Eagles’ third selection in the second round. He has primarily played as that key position forward this season, while pinch-hitting in the ruck. He has an enormous vertical leap and a booming kick, he just needs to iron out his goal kicking which he seemed to lose confidence with over time. Williams is capable of dominating games in the air, and is a great value pick at the selection, and fits a need for West Coast.

The Next Generation Academy forward lands at the Eagles and joins brother, Charlie in the AFL. While they are on opposite sides of the country, Jarrod has similar exciting traits, and is further developed at the same age than his brother. He seemed a long shot to be drafted 12 months ago, but with a five-goal haul against Vic Country at GMHBA Stadium, and a consistent back-end of the season in the WAFL, Cameron put his best foot forward and impressed the Eagles recruiters enough to match a bid. He might take some time as he fills out, but he is an exciting long-term prospect.

Local talent, Harry Edwards is a perfect rookie selection for the Eagles, as he is a long-term prospect. At 195cm, Edwards is undersized for a ruck, and is more likely to develop into that key position forward who can assist the number one ruck. He is quite raw and needs to develop further physically, weighing in at around 80kg. He is mobile for a ruck and has some nice athletic traits, and unlike many talls, applies defensive pressure to opponents. Edwards will need patience from fans, but is a low-risk pick in the Rookie Draft and one that could be developed further in the elite environment at Optus Stadium.

The former Pies defender only played the first game of the home and away season this year before making way for others and not being able to squeeze back into the side. Drafted as a mature-ager from Queensland initially, Smith dropped out of Collingwood’s plans as they stormed to a surprise grand final berth. Little would Smith know that the disappointment of both missing out on the decider and the disappointment for his side’s loss that day towards the opposition side, would change as the premiers would throw him a lifeline. He adds experience to the defence and puts selection pressure on other players in that group.

When a club wins a flag, there are no major changes needed, but the Eagles went about plugging holes in areas they felt they could improve. They picked up a couple of midfielders and a couple of developing talls, while matching a bid on their talented NGA player, and adding experience to their squad with Smith in the Rookie Draft.