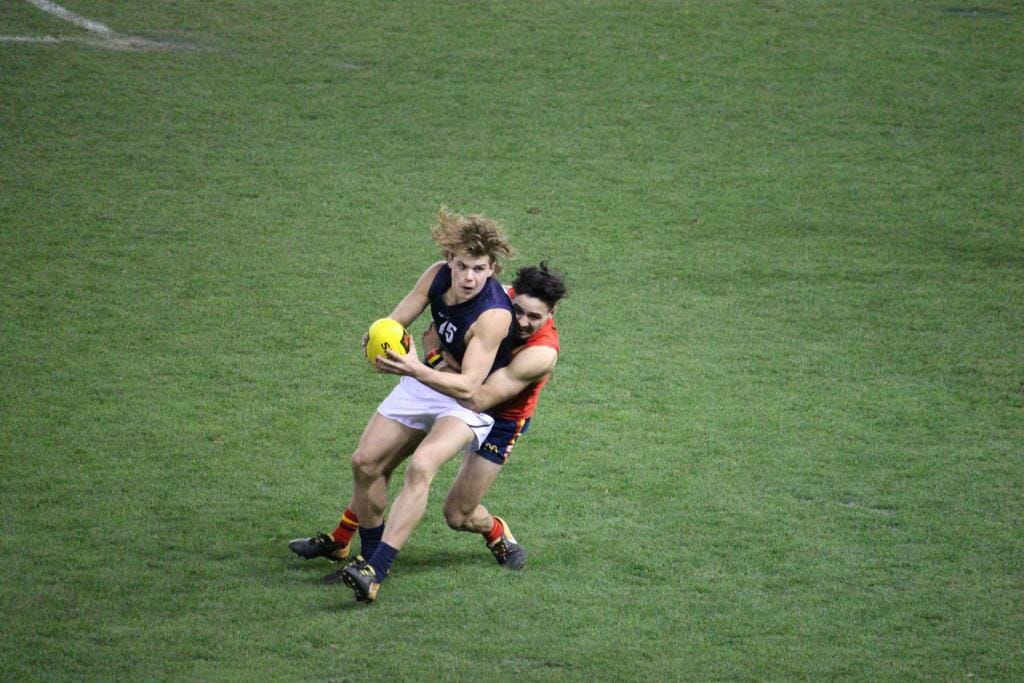 HAVING bettered their draft hand during the trade period, the Bulldogs sought to bolster their midfield flexibility with their first three picks in the National Draft, while granting opportunities to two deserving VFL guns later on and strengthening their defensive stocks with rookie and Category B selections. With ready-made prospects in vogue, only three of the Dogs’ picks were genuine under 18s.

The Sandringham Dragons skipper enjoyed a stellar year, often times spoken of as the best midfielder in the draft behind first selection, Sam Walsh. Smith broke well into top 10 contention on the back of an outstanding campaign with Vic Metro in the National Championships where he was crowned their MVP – capped by a three-goal effort against Vic Country on the hallowed MCG turf. Despite shining predominantly through the midfield this year, Smith found a home in his bottom-age season as a dashing half-back, and even proved his worth up forward when required with Vic Metro. An achilles injury ended his season prematurely and saw him miss the TAC Cup finals, but in his two games in the competition, Smith led the league in average contested possessions and clearances, exemplifying his style of play. As a consistent ball winning machine with a terrific attitude and leadership capabilities, Smith is a player who can slot straight into the Bulldogs lineup across any line and make an impact from the get-go.

Father-son gun Rhylee West has giant shoes to fill, but looks to be keen to hit the ground running having taken his father, Scott’s original number 14 guernsey. The Dogs would have been pleased to see West slip just outside of the first round having not received an invitation to draft night, settling with a well valued selection in the mid-20s that they were never going to pass up. Standing at just over 180cm, West is a tough midfielder who uses power and agility to prize the ball from contests and break away through traffic with poise. West showed his ability to drift forward with good work rate for Vic Metro over four games in the National Championships after starring in the midfield for Calder, and he may well have to start his AFL career forward of centre given his strength and nous at stoppages around goal. Partnered with Smith, West will form a key part of the talent-stacked Bulldogs midfield for years to come and looks every bit ready for the next level.

With two prized picks out of the way, the Bulldogs were clearly confident of snaring Vandermeer at a slightly later pick after trading down in a deal with Fremantle. Vandermeer is one of two overagers taken by the Dogs out of the TAC Cup, with the 19 year-old proving his worth over a consistent 2018 season with Murray Bushrangers. Having also represented Vic Country over all four games, Vandermeer showed overall improvement in his game after being overlooked in his top age year. The dashing outside player breaks lines from either half-back or a wing, with his slick ball use and athleticism making him a damaging prospect. He lacked somewhat of an x-factor often found in outside players, but has provided a consistency this year that was too good to refuse. Vandermeer could find game time in his first year given he is another year on, and would provide handy flexibility.

This season will stand as the year that Ben Cavarra finally earned his spot on an AFL list. The diminutive Williamstown forward has changed his game of late, developing into an effective small forward after proving himself as a ball-winning midfielder over a Morrish Medal winning TAC Cup year and multiple seasons in the VFL with Frankston and the Seagulls. Cavarra’s mix of elite speed and endurance makes him dangerous inside 50, with his smarts allowing him to both find space and the big sticks with ease. The constant knock on Cavarra has been his size and hurt factor by foot, and despite his new role making that less of a factor, Cavarra has worked hard on making his game more complete. Having done everything in his power to prove himself to AFL recruiters, Cavarra can now reap the rewards and could well find himself in the side early on, perhaps even alongside fellow sub-173cm player, Caleb Daniel in the midfield.

With the final selection in the National Draft, the Dogs continued their trend of taking readymade players late on by snapping up their very own VFL product, Will Hayes. A balanced midfielder, Hayes earned a State Combine invite on the back of a best and fairest winning year that saw him earn votes in 17 of his 18 VFL games. A keen accumulator, Hayes averaged 26 disposals to lead Foostcray’s count, but he also works hard going the other way in his tackling and overall work rate. Hayes is another who could break straight into the Dogs’ lineup with his readymade body, and will look to impress with his smarts after building his frame over the pre-season.

The second 19 year-old taken by the Dogs, Young was a consistent part of Dandenong’s TAC Cup premiership-winning back six. A competitive, team-first defender, Young showed enough in his overage year to warrant selection in the first round of the rookie draft as a versatile prospect with the potential to move up the ground. Young is strong overhead and while he would be looking to find the ball more often, is an effective user by foot coming out of defensive 50. With some time in the VFL, Young can fill out and hone that versatility, while also improving on tackle numbers that AFL coaches so often look towards.

20-year old North Adelaide premiership ruckman, Jordon Sweet is a good value project player who can provide cover if required. While he is raw at this stage, rookie picks are low risk and he should gain some valuable experience in the VFL to set him up for a crack at the next level. Hard to miss with his height and dreadlocks, Sweet is not afraid to take the game or opponents on, and flicks out handballs often as he follows up competitively. He may take time, but is a crafty versatile pick.

The Dogs would have been thrilled to have Khamis slip through the National Draft, with many valuing him well inside the top 40 throughout the year. Clean in the air and by foot, Khamis lays claim to the lowest clanger kick percentage of any notable TAC Cup draft prospect, and has a relatively complete defensive game given he can both intercept and rebound. Despite all of his rapid improvement, Khamis is still quite raw as a late-comer to the game, and will benefit from some time in the system to further develop with the opportunity to replace the likes of Dale Morris and Matthew Suckling in a young defence. Talent and footy aside, Khamis is also an incredible story of perseverance having moved to Australia in 2006 from South Sudan, and it’s great to see him get a well deserved chance.

The Bulldogs picked up a raft of versatile midfield options across their five National Draft selections, with another key feature of their draft haul the selection of readymade and mature-age prospects. With depth across each line achieved and a midfield set for the future, the Dogs also picked up a project ruckman, as well as some prototypical defensive cover that could prove handy in years to come.